What’s It All About?
Police. Story. 3. It’s all pretty much there for you in the title. This time out Ka Kui (played, as ever, by Jackie Chan) teams up with an Interpol cop named Jessica Yang (Michelle Yeoh) to take down a drug dealer. As ever he also has to deal with comic mishaps involving his long suffering girlfriend May (Maggie Cheung).

Why Haven’t You Seen It?
The film released in the UK as Supercop, is not Police Story 3, rather it is a spinoff (also available in the UK under its more common English title Project S) featuring Michelle Yoeh as Jessica Yang, and boasting a brief cameo from Jackie (in drag, of course). To make it even harder the other notable English speaking territory release, on the US based Dragon Dynasty label, includes only the US release version of the film, which is cut by 10 minutes from the Hong Kong release. So, though most of Chan’s films are easy to get hold of, this one has become something of a challenge to see in its unexpurgated form.

Why Should You See It?
Jackie Chan’s films tend not to be the most intellectually fulfilling cinematic experiences, and Police Story 3 is no exception. The story and characters could hardly be more threadbare, or the performances more perfunctory, if they tried. But if that’s what you’re coming to a Jackie Chan film looking for then, well, you’re an idiot. What Jackie does deliver consistently (and here, again, this film is no exception) are spectacular action and stunt set pieces, films jam packed with awesome martial arts, things going boom and feats that would seem likely to be the end of most mere mortals.

For the most part there is one star of a Jackie Chan film; Jackie Chan. Here he cedes the spotlight somewhat, providing a showcase for Michelle Yeoh (billed as Michelle Khan), who was at this time making her comeback after a break from films during her short marriage to HK producer Dickson Poon. And what a comeback it must have been. Yeoh explodes onto the screen, matching Chan for speed, daring and sheer on screen magnetism, her performance is hobbled by both the style of the acting (very broad) and the hideous dubbing, but she dominates the screen when she’s on it.

Stanley Tong both marshals and choreographs the action capably, he’s directed a lot of Jackie’s later period Hong Kong films and is a safe pair of hands, there is perhaps more emphasis on guns and explosions than before, but these new elements keep the Police Story series fresh after an initial sequel that felt very much like a remake. The comedy is also a little more played down in this film, and sadly that means a reduced role for the unfeasibly good looking and, in this role, charmingly accident prone, Maggie Chueng. 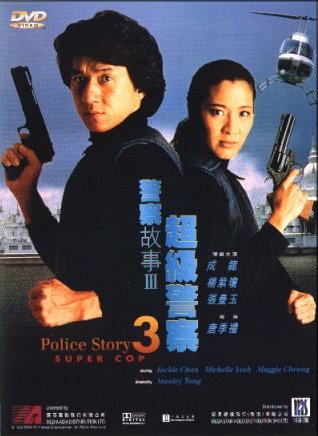 It takes a little time to hit its stride, but once Police Story 3 steps on the gas about 40 minutes in, it seldom pauses for breath, you’re never more than a minute from a great fight or an astounding stunt (even the smaller, more incidental stunts are pretty spectacular here. The 20 minute finale ranges all over Kuala Lumpur, by air and by train, in some of the most perilous looking stunts Jackie has ever put on film. Who’s that dangling from a rope ladder hanging from a helicopter? It’s Jackie. Who’s that actually jumping a motorbike on to a moving train? That’s Michelle Yeoh, doing one of the most awe inspiring stunts ever done by a woman. It’s incredibly exciting because it looks dangerous, and it’s engaging because Jackie and Stanley Tong never forget to find moments of physical comedy in the action scenes.

Police Story 3 is by no means a great film, it’s not even, unlike the original, a classic of the genre, but it is enormous fun, and peopled by a who’s who of some of the more recognisable faces in the genre (especially notable are Yuen Wah as the bad guy, Jackie Chan stunt team linchpin Mars and Sophia Crawford, stunt double for Buffy and Power Rangers). It’s a treat for fans, and certainly deserves a proper, OAR, subtitled, unexpurgated DVD release.

How Can You See It?
It looks like the only uncut version in print is the Hong Kong Blu Ray, which comes in a trilogy boxset and, happily, has an English subtitle option. Otherwise, it’s all a tradeoff. I’d recommend the old UK VHS though, it at least has the complete film on it, the Dragon’s Dynasty DVD can’t make that boast.

Next Week: As part of the Bring Back Bridget Fonda series that me and MultiMediaMouth writer Mike Ewins are running on our blogs; the Capraesque It Could Happen to You, with Fonda and Nicolas Cage.