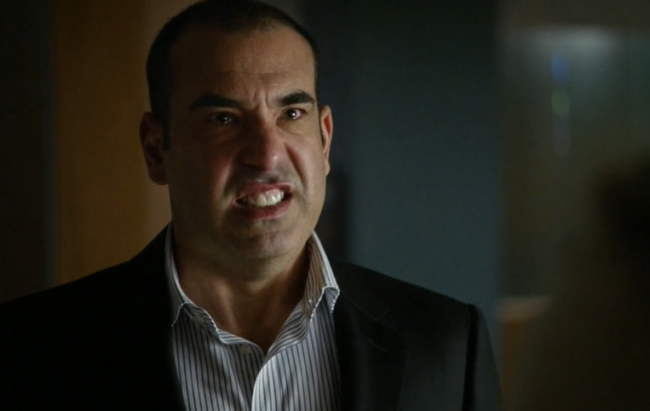 USA Network’s hit show, Suits, is in its 7th season. The first few years of the show focused on concealing a big secret: that one of the main characters -Mike Ross- was practicing law without a license or even a law degree. Ross was then outed as a fraud, spent some time in jail, and has since become a legitimate lawyer. All should be fine; but Pearson Spector Litt is under new management and it seems like every time they take one step forward, shit hits the fan.

Louis Litt is an emotional wreck almost all of the time, and this season he’s even more of a wild card. At the end of season 6, Litt’s fiancee decided she didn’t want to be with him anymore and now Litt is trying to recover from losing not just the love of his life but the child that she was carrying (despite not being his).

In episode 2 of season 7, Harvey Specter tells Litt that he’s bringing someone over from another firm who is also an old friend. Litt gets jealous and it becomes a problem. Eventually, Litt decides to let Specter bring his friend over and it seemed like Litt was actually fine with the change and was starting to make emotional improvements. Then episode 3 happened.

Long story short, Alex (the new hire) cancels lunch plans on Litt, who misunderstands the reason behind the cancellation and then proceeds to lose it. The episode ends with Louis having a jarring emotional breakdown. So…what’s next for Louis Litt?

Here are a few thing we think Louis will do next:

Louis and Harvey have always had this love/hate relationship but at the end of the day, they always seem to be able to get on the same page. I truly believe that Litt is going to lose it for good this time and do something so malicious that it will damage his relationship with Harvey and the firm in a way that cannot be reversed.

Louis is going to commit a crime.

I am not saying that Louis will kill someone, but I will not be surprised if Louis ends up committing a crime that will cost him his job and cost the firm big time. Louis has done it by accident in the past, what’s to stop him from doing something stupid out of anger on purpose?

He will get suspended from the firm.

I have a strong feeling that Louis will be suspended or quit the firm, even if just temporarily. There is something giving me the feeling that Litt might be take a break from his lawyering life and end up fighting Harvey from the outside.

Honestly, no matter what happens to Louis on the show, the man who plays Louis Litt (Mr. Rick Hoffman) deserves an award after his performance in the last episode.