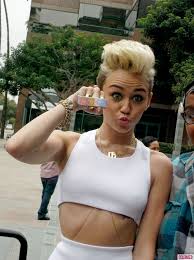 What’s up y’all, it’s Ruben Jay here. And here’s a weird thought…MILEY CYRUS AND LIAM ARE OVER! But wait, how’s that a weird thought? It’s not, but my thought about them breaking up is weird.

So why did they end their engagement? Because they weren’t in love? Maybe. Because someone cheated? Maybe. Oh wait, because Miley is a big huge WH*RE!?! Probably.

My initial thought is that they were never going to make it, but that’s my thought on a lot of couples. I’m cynical when it comes to love of other people. I don’t really think that two people can truly love each other. But sometimes I am wrong. Most of the time, I am right. Just ask my friend Kellie. I can sense a douchebag 10 miles away.

BUT! Here’s the weird thought of the day that I hope you ladies take to heart….over the past few weeks, Miley Cyrus has left very little to the imagination of us men about what she looks like naked and what she does in bed. And her finacee maybe doesn’t like the idea of his girl showing her “wrecking balls” to the world or grinding up on a man who has children of his own. Call me old fashion, but I know I wouldn’t my girlfriend/wife/fiancee just showing off her good to the entire world.

I believe that modesty is sexy. Its one of the reasons why I LOVE Demi Lovato. She doesn’t go all out and showing her “la La Lands” to the world, and she knows she doesnt have to to be beautiful. Sure, Demi potentially made some mistakes on taking pictures of her La la Land and not deleting them so some perv now has them. But that’s one thing. To do it on national television or in a music video, is trashy. (Disclaimer: I am not saying sexting is okay!). But what I am saying is that showing off your goodies to the entire world makes me want you less. And that’s probably the same thing Liam is saying.

THATS the reason I could never date a super model. So girls, do us men a favor don’t show us everything. Make us want you for you, not for what you have. Take Miley cyrus as an example of what not to do!