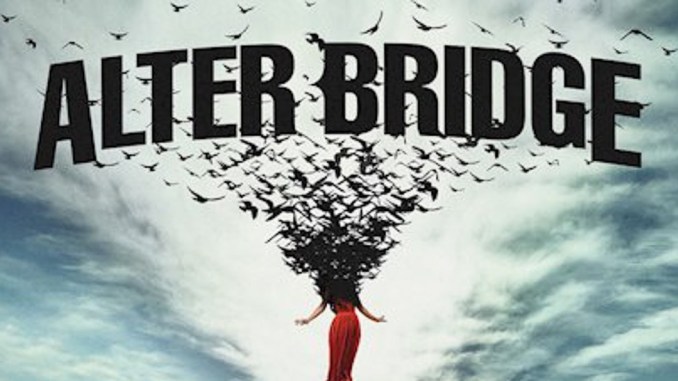 Walk The Sky is the 6th studio album for the hard rock band Alter Bridge. Made up of Myles Kennedy (Slash, Mayfield Four) on vocals and guitar, Mark Tremonti (Creed, Tremonti) on lead guitar and backing vocals, Brian Marshall (Creed) on bass, and Scott Philips (Creed, Projected) on drums, Alter Bridge has put forward their most progressive album to date.

This album is an incredible listen from start to finish. I hope you take the time to read this track by track review and decide to buy the record!

Now, let’s jump into it.

The opening track on Walk The Sky serves as more of an intro or teaser track. I believe this is the shortest track to ever be on an Alter Bridge record. At 1:23, this song really sets the mood for the rest of the album.

Kennedy’s voice is so soothing and calm with the mellow music track in the background. I love the breathiness of Kennedy’s voice on this track. The track fades out and kicks right into “Wouldn’t You Rather.”

This is a hard rock track if there ever was one. The opening riff really gets you pumped to rock out. The kick drum comes in at the right time, and then the full band begins to play. Kennedy’s voice kicks in and all is right with the world.

“Wouldn’t You Rather” was also the lead single off the record, so I’ve had a while to sit with the song. It is a great first single and a great second track for the album. The song structure is great as well.

I love the message this song sends with the lyrics, “Wouldn’t you rather, live from the heart”. Amazing song. The bridge really takes this song to the next level! We get the epic and classic Tremonti guitar solo on this record.

“In The Deep” was one of 5 songs that the band released in advance to the record releasing. Great opening guitar work from the guys. The drums and bass kick in giving the song a nice kick start in the beginning.

The song slows down as Kennedy begins to sing. He brings a clean, raspy sound to the song. The chorus is a fun sound from the band.

I feel like the AB crew is pushing a little more mainstream with this record.

In verse two, Kennedy brings back the raspy vocals. Absolutely great storytelling from Kennedy on these lyrics. I encourage you to listen to the lyrics.

The bridge brings a bit of speed metal into the song. You can hear the Tremonti riffs kick in with the classic drumming style of Flip.

This song has to be one of my favorites of the entire record. It gave me the vibe of “Ghost of Days Gone By.” I feel like this could have been a single.

The opening of the song had some keys on it, something new to the Alter Bridge world. Everything about this says that it could be a mainstream hit for them if they push it properly.

The chorus is fun and high energetic. I love it! It sounds like the keys follow throughout the entire song, but I am not sure.

The mix on this song is incredible. You can hear Tremonti’s backing vocals clearly mixed in with Kennedy’s lead vocals. The guitar solo on this is mixed extremely well with Flip’s drumming.

Kennedy’s vocals on the chorus after the bridge will cause a bit of an eargasm.

“Native Son” kicks off with a synth opening. The hard rock that follows the opening is high energy. This song is everything you want from the Kennedy/Tremonti duo in songwriting. Kennedy’s vocals on this track are impeccable.

I love the chorus on this. I am surprised that this wasn’t one of the songs that the band released as a preview to the album. It sounds like there are some strings or something in the background of the record. Maybe keys.

This is classic Alter Bridge.

The opening of this song is deceiving for the mood of the entire song. I like the melody of this song. It’s a new style for Kennedy to sing.

The chorus is a great anthem for the band. I feel like this is a throwback to when the band had their backs against the wall to survive in 2007/08.

They feature keys on this song as well, which is a nice new element for the band.

Kick drum intro with some high hat. The sexy guitar riff in the intro compliments the opening lines of Kennedy. Kennedy’s lower register has always been a secret weapon for him. The first 60 seconds of this song will be full-on eargasm for you.

The build of this song is so incredible. The ensemble builds the song beat by beat, with he chorus paying off as the build smoothly transitions into the chorus. Kennedy goes into his vintage high register and belts it in. .

The band brings it down a bit, and then kicks into a new gear for the second verse. Kennedy goes up and down his scale and it’s insane. .

Thank goodness this wasn’t the end! This song’s intro reminds a lot of the Blackbird era AB. The vocals have some effects on them that I am not a huge fan of, but overall this song is great.

I feel like though this is called ‘The Bitter End’, it brings a message of hope. “It’s never too late to learn how to start living right” is a great message to send.

The bitter end will come in time.

(Aftersong thoughts: this song has a great balance of the original Alter Bridge sound — from One Day Remains — and then balances the sound from Blackbird and ABIII very well. This could be a song that I show to friends who want to know more about the band.)

Oh, this song got SO many fans upset. The intro of this song is a nice guitar rift over the sound of keys. I absolutely love it. Kennedy’s vocals on this are in your face.

The structure in the chorus is great. Tremonti’s guitar riff is just as kick ass as anything on this record. I love the line “The millions you stand to hurt, still willing to stand right by your side.”

The belief that this song is politically motivated is currently surfacing. Much like The Last Hero, (I asked Myles about the song’s content – a political leader), this album has been said to be influenced by the political climate.

Much like almost every Alter Bridge album, there needs to be a song that has some acoustic guitar. But this song takes you to a new level. Right after the opening acoustic line, you hear Tremonti’s heavy metal influences kick in.

SURPRISE! Tremonti is taking the lead vocals on this. WOW! He’s gotten so good as a singer. I love this song. Mark’s voice on here just makes me so happy. The chorus is a nice change of pace for the record. As the chorus ends, the speed metal kicks back in.

Kennedy is taking the backing vocals on this track, and it compliments Mark’s voice really well. This song will be a sleeper for most. However: do not overlook this song. Between the guitar work, the vocals from Tremonti, and Kennedy doing backing vocals, you will truly enjoy this musical ride. .

I found myself full on moshing in the chorus. It’s a grade-A song. The song ends on a great note with a guitar solo and just a straight up jam to close out the song!

Kennedy brings back his low register. This song starts out extremely mellow, with most of the first verse in Kennedy’s lower register, and it ends up taking you by surprise.
I know I said that Forever Falling can be the sleeper on this record, but this song is slowly becoming my favorite on this track. Kennedy does an incredible job on the vocals. The drums are very much Tool inspired, in my opinion.

Walking On The Sky

More keys to open this track! This is a different sound overall for the band. It sounds like the band is experimenting a bit with this song. It’s good, just…different. Very Tremonti-feeling.

Elvis Baskette, the producer on the record, did an incredible job mixing Kennedy and Tremonti’s voice together. The entire song has the two harmonizing.

This is inspiring. The chorus begs the listener: don’t let the world tear us apart. I feel like this might be a love letter of sorts. . It seems like this is Kennedy, theoretically writing to someone he loves, to put work into this relationship.

This was the final of 5 songs that the band used to promote the record. I hated the video they put out for it, but the song itself is incredible!

The song starts off with a kickass rift and then transitions into some guitar picking for the verse.

Dying Light is an incredible song to end the record on.

My Final Thoughts On The Record

I was a bit worried to listen to this record, as so many people had been complaining about the singles. However, after listening for a week straight, it’s safe to say that I am excited for the band moving forward!

Walk The Sky did an incredible job paying tribute to the 5 previous records while also allowing the band to grow creatively and add to their sound. Yes, some songs sound more mainstream and commercial. Yes, some songs have added keys to the band’s sound. Yes, this album is a continued evolution for a band that has spent 15 years evolving.

Myles Kennedy’s vocals have never sounded better. Mark Tremonti’s guitar work is on full display on this record. Over all, this might be one of their most progressive albums to date.

ABIII was transformative for the band and a great follow up for Blackbird. Walk The Sky will easily be able to stand on its own against the rest of the Alter Bridge discography in time.