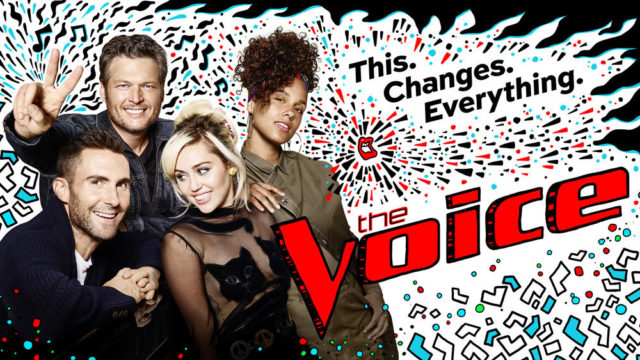 What’s up everyone! Headlines Tonight is back for a Live Blog for the Season 11 Premiere of The Voice!!

Keep checking back here throughout the show to check out our updates covering the first night of Blind Auditions with new coaches Miley Cyrus and Alicia Keys, and of course our returning coaches, Blake Shelton and Adam Levine!

The night starts of with a cute little preview showing what this season is going to be like, and I am so excited! Carson Daley’s voiceover says it is going to be the most unpredictable season yet! Let’s get this show started!

The first performer tonight is 21-year-old Jason Warrior. As someone who grew up with his father in and out of jail since he was 4, and lived in a crime-based neighbor, he was accepted into a university on a theater scholarship! Jason shows a lot of passion towards his audition, and is excited for what’s to come. He starts off the auditions performing, “Living for the City.”

A good amount of the song goes by, then the big note comes, and Adam is the first to push his button! Following him, is new coach, Alicia Keys.

Adam and Alicia are the only two with their chairs turned, but there is no doubt that Jason is happy with that!

After a lot of bickering between the coaches, Jason chooses… Team Alicia!

That makes Jason the first person on Alicia’s team!!

Next up, we have David Masion, who is actually a former swimmer and raced against Michael Phelps in the earlier years! He gets up on stage and sings, “Sex and Candy.” Amazing performance, and it truly reminded me of Adam Levine. During his interview, he actually said he wanted to sing after attending a Maroon 5 concert!

Adam is the first to push his button, then Miley, then Alicia, then Blake! Making that the first 4 chair turnaround of the season!!!

Adam pretty much begs David to join his team, Miley says that David should go with what is unexpected, a.k.a her team, and Alicia and Blake give similar arguments.

17-year-old, Courtnie Ramirez, comes out with the most outgoing person ever! She is cute and adorable and is truly just excited to be there. She gives a very energetic performance of “Mama Knows Best!”

She performs for awhile before anyone pushes their button, and Miley is the first to do so after some convincing from Alicia Keys. Not long after, Alicia also pushes her button.

Alicia shares that she does believe Courtnie would be best on Miley’s team but still fights (very nicely) to get Courtnie on her team.

When it comes down to it, Courtnie chooses… Team Miley!

Courtnie Ramirez is the first person to join Miley’s team!

Sundance Head is 37-years-old from Texas with a big family living under one roof. His father is a Musician in the country music Hall of Fame.

With the help of his wife, he’s been performing shows around his town and hopes to get Alicia Keys as his coach! Sundance performs, “I’ve Been Loving You Too Long,” Adam Levine is the first to push his button, and it doesn’t take Blake Shelton too long to follow.

We all know what’s coming next, Shevine!!!

Next up with have Maggie Renfroe! Her pre-performance interview shows that she loves to share her music with others!

She comes out singing, “Lost Boy,” and although you can tell she is very nervous, I think it is still a beautiful rendition of the song.

Unfortunately, her nerves seemed to get the best of her, and none of the coaches were impressed which meant no chairs were turned around.

All the coaches gave her great advice to keep practicing, and gain more experience, and Maggie seemed very thankful for the opportunity.

Good luck to Maggie in her future performances!

Ali Caldwell is next to perform! She is a former girl group singer and is actually really well-known performer in Russia!

She performs “Dangerous Woman,” and in my opinion, it seemed to be a little off-beat, but her voice was still amazing! Thankfully Adam heard the potential and he is the first to push his button!

Then not long after, Blake, Miley, and Alicia all push their buttons, making it the second four-chair-turnaround tonight!

This one becomes a true battle between Alicia and Adam, but Ali shocks the world and chooses… Team Miley!

Next up we have, 16-year-old Riley Elmore. The younger teens seem to be having little luck tonight, but as soon as Riley starts singing “The Way You Look Tonight”, everyone can just hear the star potential this kid has.

Adam wastes no time and immediately pushes his button, with Blake pushing his right after.

None of the coaches believe that he is only 16-years-old and is able to sound like the legendary Frank Sinatra.

Shevine is back at it again, arguing about which team Riley should be on, even bringing up how Michael Buble is the only other person right now, who can perform music with that type of sound!

Adam tries to seal the deal by going up on stage and singing with Riley!

Riley is now the first person on Adam’s team!

The next one to perform tonight is Dana Harper, whose father is Derek, who is a former NBA player.

Dana hopes to get Alicia Keys as her coach, and takes the bold step of performing a rendition of “Jealous.”

Alicia Keys is the first to push her button, with Blake following about .5 seconds after her!

At the last second, Adam also pushes his button! In a shocking turn of events, Dana chooses… Team Blake!

Getting closer to the end of night 1, we have 15-year-old, Gabe Broussard! Unfortunately, Gabe was diagnosed with a rare disease, that over-time could potentially get worse to the point of him losing his eyesight. He’s in a band with friends from high school, but tonight he will be performing solo singing, “Lonely Night in Georgia.”

Miley is the first to push her button, and sometime after, Blake also pushes his button!

Miley and Blake go head-to-head to see which one can win over Gabe for their team.

Chris Cron is the next to perform, and he actually had a record deal in Japan with his band Melee Devils and Angels, they even performed at Warped Tour!

Chris feels as though his time as a performer isn’t over yet, and that this is the chance he needs to get back out there. He performs “Never Tears Us Apart,” and I feel like it was a great performance.

Unfortunately, it didn’t seem like the coaches were really interested in him enough to push their buttons.

The coaches still compliment his performance, and believe that he has potential.

Good luck to Chris in his future performances!

Closing out the night, we have 20-year-old, Christian Cuevas.

Christian gives an amazing rendition of “Who Am I Supposed to Be Without You” and without hesitation, Adam and Blake push their buttons! Alicia Keys follows not too long after.

With the help of Miley, Christian chooses…. Team Alicia!

Well that’s it for tonight everyone, hope you guys enjoyed our live blog!

Be sure to check out the site tomorrow for night 2 of the blind auditions!

Here is where the teams stand as of tonight!