A cult classic recently restored and re-released on DVD and Blu-Ray, this French oddity is most noted for its surreal animation style and unique design. The Draag planet is mostly revealed in panning and zoom shots; a 2D world of savagery and mystery, it’s soft colour palette consists of browns and blues, with the Oms presenting a possible influence on James Cameron’s Avatar. It’s a film about science and technology, with underlying themes about knowledge being mistaken for power, and interesting presentation of the idea of dictatorship (the film was developed and released during the Cold War). The film, which surely influenced the likes of Terry Gilliam and The Brothers Quay, ends on a note of peace – but not before the odd landscape has given way to unique monsters, such as a dragon-like creature with a mouth like an open, venomous flower, and snapping worm-like creatures that are ridden to do battle. It’s slow paced and sometimes infuriating, but this divisive animation is still a must-see, especially for its presentation of meditation as a transformative experience of shape-shifting power. Why this one isn’t recognised as a bona-fide classic baffles me, but it might have something to do with its obscure referencing of 30s horror and 50s sci-fi/creature features, as well as the unexpectedly terrifying and violent ending, one of the true heartbreakers of our time. Jennifer Aniston, Harry Connick Jr. and Vin Diesel (voicing the robot, his most tailor-made role) round out the voice cast of this gorgeous animation which takes an unlikely friendship, which shouldn’t really work, and gives it every ounce of humour and depth it can find. I haven’t seen the film in almost ten years, but I can remember almost every scene, and the rather profound effect the deer scene had on me – with the iron giant struggling to grasp the concept of death, as the young boy – with no greater understanding – attempts to explain murder, and why humanity feels the need to kill. This becomes all the more important for the shocking finale, where the iron giant reveals his true (but unknowing) purpose as a machine built for death – and as he learns the importance of love, he accepts his fate as a sacrificial one. Playing with themes and concepts far above the heads of most animations, it’s a gentle and mature story, and an unforgettable one. 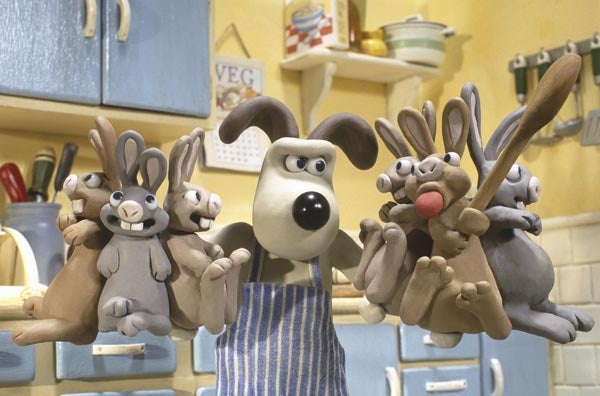 Funny, charming and quintessentially British, this cheese ‘n’ crackers comedy has as many gags-per-second as Airplane! (1980) but heart and wit to boot. As usual its a reference-spotting treat for cineastes too, with nods to Monty Python And The Holy Grail (1975), An American Werewolf In London (1981) and Top Gun (1986) intelligently peppered through the screenplay. The voice cast, including Helena Bonham Carter and Ralph Fiennes, is spot-on, but it’s the comically expressive Gromit who steals every scene, especially in the action finale where he’s chased in a toy place by a thuggish bulldog, who carries a quaint little purse, but sadly little change. Furiously paced, the film is much more ambitious than the standard TV shorts, delivering all the classic elements of the cinematic heyday – romance, drama, comedy and action. A genuine modern classic, Curse Of The Were-Rabbit also has the same stop-motion small-town charm of shows such as Camberwick Green and Postman Pat, but is smart enough to address decades of sci-fi and horror cinema, delivering a package that literally has something for everyone.

A clichéd and predictable choice, I know, but no animation list is complete without this visionary masterpiece from one of Japan’s premier filmmakers. An Oscar-winner, it tells the story of a young girl on her way to live in the crowded, faceless suburbs, but she soon wanders into and gets lost in a fantasy world of witches and monsters – a universe where her parents are kidnapped and turned into pigs. It’s not a film that can be described in 200 words, but by meshing traditional Japanese culture and elements of previous Studio Ghibli works Miyazaki creates an Alice In Wonderland style tale of self-discovery and love. It’s a cheesy message, but one presented by towering castles, dragons and the terrifying yet saddening presence of No-face, who has all sorts of allegorical implications, and provides a moral backbone for the story. The visual aesthetic is astonishing, but it’s the imagination evident in every frame that really rewards watching this dark fairytale over and over – the level of detail is frankly mind-blowing.

Abandoning the shallow philosophizing of Waking Life , Richard Linklater honed and perfected the rotoscoping technique he experimented with on that movie to create a hallucinogenic dystopia for his existential adaptation of Philip K. Dick’s 1977 sci-fi novel. A shape-shifting mystery, Linklater’s portrayal of alternative drug culture in a future-verse (seven years from now) is captivating and disturbing, making great use of colour, but also meshing images, forcing us to look closer. It’s a tale of government deception, insider-politics, substance abuse and the nature of addiction; its disruptive qualities, and slithering presence in the upper-echelons of the LAPD. It’s an intelligent movie, featuring a career best performance from Keanu Reeves (who gets unfair flack) but it’s most enjoyable for the visual contortions and slow, drug-induced pace and atmosphere. The cinematography by Shane F. Kelly is intoxicating, and the hilarious script gives proceedings an even more surreal quality; “what if they come in through the back door or the bathroom window like that infamous Beatles song?” Classic, and rewarding on re-watches. 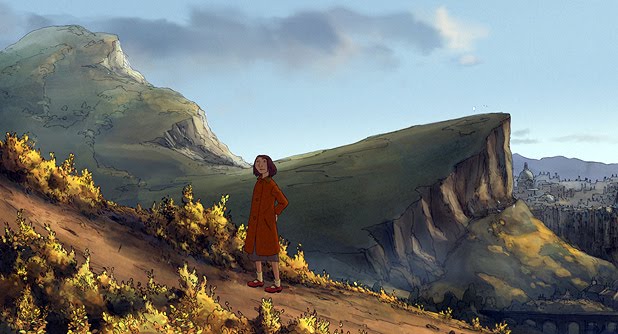 A loving homage to Jacques Tati (the screenplay is re-adapted from one of his unfinished works), Sylvain Chomet’s follow-up to The Triplets Of Belleville (2003) trades in cynical bleakness for romantic discovery. Set in Edinburgh in the early 60s, the film finds aging magician Tatischeff struggling to compete with the birth of rock ‘n’ roll music – especially Billy Boy And The Britoons, who steal every venue he attends. The age of the entertainer is painted as a dying one, and while one wide-eyed girl named Alice (a reference to her of Wonderland fame) believes magic to be real, she is also faced with the harsh realities of a suicidal clown and alcoholic ventriloquist. Tatischeff and Alice teach each other of their worlds, and the central themes are of time and place. By the shattering climax Chomet “relays the sad truth that, one day, the lights go out on everything. The people you love won’t be around forever and often you won’t know what you’ve got until it’s gone” (from my original review). A silent picture, The Illusionist captures a magical spirit that Tati would be proud of, but achieves a melancholic tone all of its own, relived in startling sequences that turn feathers into snow and pages into butterflies. A masterpiece. 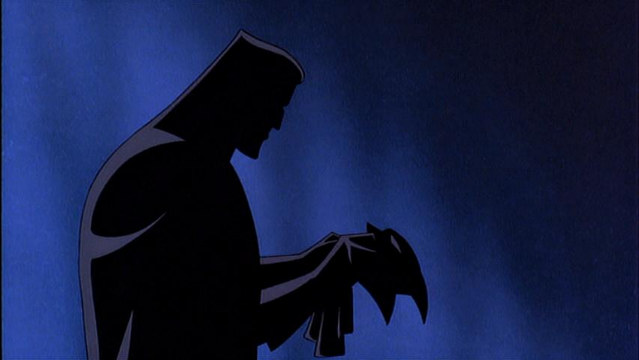 It’s the best Batman film. Yep, you heard me. As much as I love Burton’s Batman Returns (1992) with its spindly, creepingly gothic design, Mask Of The Phantasm most perfectly nails the tone of the original graphic novels, expanding upon the universe of the 90s animated series and masterfully weaving several plot-lines into an emotional, exciting 70 minutes. The animation is beautiful, especially in the classical opening credits sequence, and the lighting casts Batman in an Expressionist shadow (remember the DC Nosferatu issue). Best of all is the focus on Bruce Wayne, normally the least interesting character in his own story, here he is fascinatingly complex; the psyche of a man who must become a bat to fulfil the wish of his dead parents, and his role as a societal outcast wearing a human mask to fit in is fully explored in his heartbreaking relationship with Amanda Beaumont, the most sympathetic and likeable of all Wayne’s love interests. Their story, told through flashback, has a genuine warmth and believability, making the final quarter of the film all the more powerful. Oh, and Mark Hamill is the best Joker – his laugh finding the perfect note between hysteria and chilling menace. Also check out Batman & Mr. Freeze: Sub Zero (1998).

This gentle Japanese drama has suffered a terrible fate at the hands of UK distributors, originally planned for a cinema release but now having has its straight-to-DVD date pushed from August 2010 to March 28th 2011, to coincide with the anticipated release of Summer Wars (2009). It’s one of the most beautiful films I’ve ever seen, with Shinkai handling art direction, cinematography and colour design for his masterpiece. The opening shots of pink petals falling from a beautifully lit sky; making ripples in a puddle, softly landing on parked cars, illuminating the city like a snowfall of love, is instantly enrapturing. The story follows a man named Takagi through his life and love with Araki, a classmate in his youth and a lover in later life. As the seasons pass and the innocence of youth is lost to bitterness and isolation the characters keep in touch via beautifully written letters, often read aloud over images of astounding depth. Whenever the characters meet the heartstrings are pulled to breaking point, but the film never falls into cliché, or plays the card you expect. Love, as in real life, is not always found – but it can be glimpsed, by the passing of a train, as the unforgettable ending proves. Mature and romantic, this is one of the most underrated films of the last decade.

One of the most powerful films I’ve ever seen, this short from Suzie Templeton is a miserablist drama to rank with the finest works of Ken Loach and Lynne Ramsay. Shot in drab browns and greys, the film opens with a father entering the lonely room of his son and telling him that “she didn’t suffer” – a muffled attempt at sparing the child details of his mothers death. Soon their dog becomes sick, and the grieving father decides to put it out of its misery, placing a cushion over its head. Euthanasia is a tough topic for any film to address but Templeton handles it with maturity and grace; when the father removes the pillow and the dog once again draws breath he desperately reaches for the lamp, shadowing the room as the son watches; he can no longer be protected from the fact of death with the promise of peace. Still, the father tries his best telling the son that the dog “didn’t suffer.” “Like mum?” the boys asks. The father nods. We don’t know how the mother died, but it soon becomes shockingly clear that it was likely not peacefully, but painfully, and the well-intentioned deceit of the father will have devastating repercussions on the son. See it on YouTube.

Sitting right at home with surrealist 70s classics like El Topo (1970) and Performance (1970), Dougal And The Blue Cat is a bizarre animation from the minds of Serge Danot and Eric Thompson. Most people don’t know that The Magic Roundabout started life in France and when commissioned by the BBC was re-adapted by Thompson, who created his own stories and characters by interpreting the images without a translated script. One phantasmagorical set-piece (somewhat influenced by German Expressionism) which sees the Blue Cat on a quest to induct himself to the blue cause (literally a plan, fronted by the voice of Fenella Fielding, to turn everything blue), would feel more at home in a David Lynch film, but even that undersells its Gallic insanity. Beautifully designed and scored, the film has a real sense of impromptu imagination – like the meshing of two minds who, despite never having spoken about the film, are unknowingly telling one complete story. Of course the crowning achievement of Thompson is still Dougal who, upon encountering any sort of problem, addresses the situation with the promise of writing to The Times. Utterly bonkers, this is still an underrated treat.