The Miz returns to MTV after 12 years 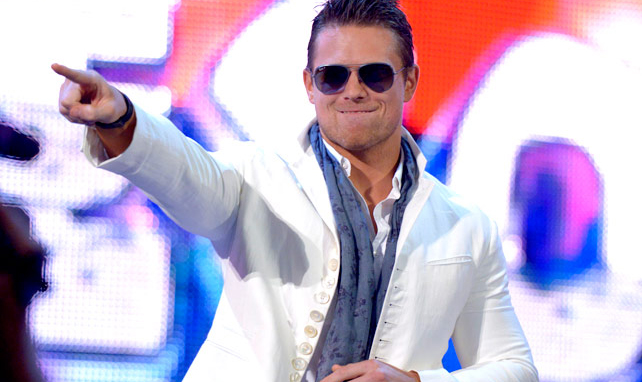 HOLLYWOOD, CA – MTV’s most iconic franchise “The Challenge” is back again with the debut of an eight-week special event “The Challenge: Champs vs. Stars.” Hosted by WWE superstar and former challenge competitor, Mike “The Miz” Mizanin, “Champs vs. Stars” will feature ten of the fiercest champions from past “Challenge” seasons. The alumni go head-to-head against ten celebrity athletes and entertainers in challenge-style competitions to determine who will reign supreme. Winners will compete for a chance to take a share of the $150,000 cash prize to donate to their beloved charities. “The Challenge: Champs vs. Stars” premieres November 21st at 10 p.m. ET/PT.

“Building on the success of ‘Champs vs. Pros’ we expanded the format for the second season,” said Tiffany Williams, SVP, Original Programming for MTV. “As a WWE Superstar and former Challenge competitor, Mike ‘The Miz’ Mizanin encompasses both athlete and star, making him the obvious choice for host as he has evolved into one of the most notable names and decorated athletes across the globe.”

“After 12 years, I can’t tell you how excited I am to be back on The Challenge, this time as the host,” said Mike “The Miz” Mizanin. “I can honestly say that if it wasn’t for this iconic show, I never would’ve had the confidence to fulfill my dream of becoming a WWE Superstar. ‘The Challenge’ has evolved since my days of playing and now it’s pitting the biggest celebrity athletes against the best ‘The Challenge’ has to offer. It’s must-see television at its finest!”

Each episode of the eight-week special series will pit the two teams against each other in grueling challenges. The winning team from each challenge will nominate their most valuable player (MVP) who will receive money for their charity, be safe from elimination, and choose their team’s least valuable player (LVP) to go into elimination. The losing team will nominate their own LV P to go into elimination, and the two will compete to keep their spot in the game and ultimately, their share of $150,000 to donate to their beloved charities.

Meet the Host and Stars of “The Challenge: Champs vs. Stars:”

Before evolving into “The Most Must-See Superstar in WWE History,” Mike Mizanin broke out on MTV’s “The Real World: Back to New York,” introducing his alter ego, “The Miz.” An MTV stalwart for several years, starring on several seasons of “The Challenge,” Mizanin was offered a WWE developmental contract after placing second on WWE’s “Million Dollar Tough Enough” in 2004. Over the next decade, “The Miz” climbed through the ranks to become one of the most recognizable faces in WWE. Mizanin is a former WWE Champion, two-time United States Champion, six-time Tag Team Champion and a seven-time Intercontinental Champion. He is the 25th Triple Crown Champion in WWE History, only the 14th Superstar to complete the Grand Slam, and main evented WWE WrestleMania 27 opposite John Cena and Dwayne “The Rock” Johnson. During his tenure with WWE, Mizanin has starred in the third, fourth and fifth installments of “The Marine” film franchise, where he plays the grizzled veteran Jake Carter. He has also starred in the comedy “Santa’s Little Helper” as well as the ABC Family original movie “Christmas Bounty.”

Triple threat performer Ariane Andrew is a dancer, actress and former professional wrestler. The former “Total Divas” star isn’t afraid to tell it like it is or throw down in the ring to prove a point. Ready to break new barriers, Andrew is bringing her athletic skills and conniving ways from the ring to “The Challenge.” Underestimated because of her size and swag, Andrew is not intimidated by any of the Champs and will do whatever it takes to claim the title and win money for her charity.

Best known for appearing as a contestant on “The Bachelorette” and “Bachelor in Paradise,” Josh Murray is no stranger to competition. Despite a history of striking out with love, Murray found success as a professional baseball player in his younger years and his love of sports and competition has never left him. Tall, good-looking, and athletic, Murray is certain to have the ladies swooning and the competition shaking in their sneakers.

From her signature bright locks to her larger than life personality, “Wild ‘N Out” star Justina Valentine always manages to shine in a crowded room. This singer, rapper, and songwriter is walking into the competition with one alliance already in the bag: her fellow “Wild ‘N Out” cast member and friend, Matt Rife. With her sunny disposition, Valentine is bound to charm over a Champ or two — but does she have the physical talents to compete at the level of our resident Champs?

At first glance, Kim Glass is quite the force to be reckoned with. At 6 feet 3 inches, Glass led her Olympic Volleyball team to a silver medal in the 2008 Beijing Games, but she’s not all brawn. Kim was one of only three athletes featured in Sports Illustrated’s Swimsuit edition. A fierce competitor, Glass is a team player and expects only the best out of herself and her teammates. She’ll be at the helm to lead the Stars as they come face-to-face with the Champs.

With his latest iconic role as one of the new hosts on MTV’s “TRL,” Matt Rife, is destined to break out even bigger. The 22-year-old stand-up comedian already made history as the youngest person ever to be cast on MTV’s “Wild ‘N Out,” where he harnessed his hilarious stand up skills. On ‘The Challenge’ he wants to show the Champs that he’s willing to go head-to-head in any physical challenge and is more than just a killer smile with perfect abs. Rife is ready to be the last one laughing when he sends those Champs home.

Don’t let her short stature and bubbly personality fool you, Michelle Waterson packs a punch. A life-long martial artist, Waterson lit up the MMA world with dazzling submission skills and lightning-quick strikes. Before joining the ultra-competitive UFC, Waterson was the #1 ranked fighter in the world and was crowned champion multiple times. Although she’s a newcomer to the franchise, Michelle is ready to earn a new title to her list as #1 on “The Challenge: Champs vs. Stars.”

The term “Riff Raff” is usually reserved for a person who is up to no good or someone you wouldn’t want to be associated with, and at first glance, it would be easy to write off this rapper as just that. But after looking past his braids, tattoos, and eccentric fashion choices, there’s more to Riff Raff than first meets the eye. From his appearance on “From G’s To Gents,” to his transformation into a viral internet sensation, Riff Raff, also known as “Jody Highroller,” is a master of reinvention and surprise. When the power of persuasion and manipulation can be your biggest asset in this game, Riff Raff is not one to be underestimated.

The son of hip hop royalty, Romeo Miller, formerly known as Lil’ Romeo, has a lucrative music and acting career all his own. His desire for competition isn’t stifled by the fact that he already has all the finer things that life has to offer. Miller is always up for a challenge and competing against these Champs will be no different. With celebrity charm running through his veins, Miller is certain to score a few points with the ladies while simultaneously threatening the competition.

They say good things come in small packages and legendary gymnast Shawn Johnson is no exception to the rule. Amongst her many titles, Johnson has four Olympic medals, including a gold in the 2008 Games. Even though she retired from gymnastics, Johnson still has the heart and drive of a competitor. At only 4 feet 11 inches, Johnson is all strength and power and despite her small size, the Champs shouldn’t underestimate her will to win.

Former NFL wide receiver, Terrell Owens, also known as T.O., is a powerhouse athlete with a colorful, and sometimes controversial, personality guaranteed to put the Champs on edge. Although he retired from football, T.O. is still extremely competitive and will stop at nothing to win. He’s used to being the alpha male on the team, and with his dominating presence, T.O. is ready to tackle “The Challenge: Champs vs Stars” like a pro.

MTV is a global youth culture brand inspired by music. MTV is a unit of Viacom Inc. (NASDAQ: VIAB, VIA).

Bunim/Murray Productions (BMP) is the leading producer of innovative entertainment content. The Emmy Award-winning company is widely credited with creating the reality television genre with its hit series The Real World (32 seasons on MTV). BMP continued to innovate with the first reality game show, Road Rules (MTV), in 1995; the first reality sitcom, The Simple Life (E!), in 2003; and the first reality soap opera, Starting Over, in 2003. BMP’s current programming includes Keeping up with the Kardashians, Life of Kylie, Total Divas and Total Bellas (E!), The Real World, The Challenge and The Challenge: Champs vs. Pros (MTV), Project Runway and Project Runway All Stars (Lifetime), Valerie’s Home Cooking (Food Network), Born This Way (A&E), Earth Live (National Geographic), Bill Nye Saves the World (Netflix), The Selection: Special Operations Experiment (History), The Healer (TLC), Chachi’s World (go90), GloBugz (YouTube) and Ball in the Family (Facebook Watch). BMP has also produced They Call Us Monsters (PBS), Valentine Road (HBO), Pedro (MTV) and the Emmy Award-winning Autism: The Musical (HBO) for BMP Films. Based in Glendale, CA, the company was founded in 1987 by Jonathan Murray and the late Mary-Ellis Bunim, who were inducted into the Television Academy’s Hall of Fame in 2012. The company joined Banijay Group in 2010.