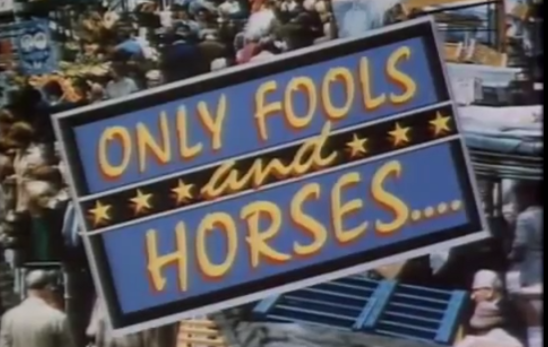 So it seems from the last two episodes that OF&H hit its stride early. After some early installment weirdness (perhaps?), we’ve had sharp comedy and performances going from strength to strength as characters are fleshed out and the cast became accustomed to the series. This next episode though is one I don’t ever recall seeing, which considering the amount of times some episodes are repeated is quite remarkable in itself. Let’s see what it holds.

Episode 5: A Slow Bus to Chingford

I’m going to have to do some research before the next episode to see what was opposite OF&H on other channels during this period as the fluctuation in ratings is pretty high week to week even for a new series.

We open on Rodney in the flat with a girlfriend, Janice (played by Gaynor Ward, who was the girlfriend of Nicholas Lyndhurst at the time). The lights are dimmed, romantic music is playing and Rodney is very much playing the pretentious artist, speaking as though he were an expert and making out he knows David Hockney. Janice is unresponsive to this though, only noting that her brother paints too, but much to Rodney’s disappointment, he’s a painter for the council. The facade wears off pretty quickly anyhow and Rodney asks Janice to remove her bra, to which she announces she isn’t wearing one. Oh my! Maybe that’s why this episode doesn’t air much in daytime reruns?

Just as they begin to get passionate though, Del walks in and very much ruins the mood. He belittles Rodney in front of Janice (a nice callback to episode two where Rodney specifically requested his older Brother not do that in front of women they were trying to impress). Del pitches in on the artistic conversation with his own opinions, Michelangelo was a “wally brain” and the Venus De Milo is sick, mocking the disabled! Quickly changing tack though, Del asks Rodney if he still wants a job. We get some topical conversation about the 3 million unemployed in the UK at the time (take that Maggie Thatch!) leading to Del announcing he’s got Rodney a job as a security guard. Rodney is over the moon, he’s going to be a “Trainee NSO”, but his enthusiasm wanes as he realises he’s going to be a Nightwatchman and further upset when he finds out the company employing him is called ‘Trotterwatch’, he’ll be working for Del. Things continue to turn sour for Rodney as Del produces his uniform, a knocked off Traffic Warden blazer and had (TW can stand for Trotterwatch too!) that is several sizes too big. Rodney refuses initially to do the job, but Del works on his insecurities in front of Janice, implying he’s scared to take on the job and soon draws in his younger Brother. Del heads for bed, but not before cracking a joke about Rodney having bondage gear and whips, leading to Janice making a hasty exit before Rodney can explain.

We cut to Rodney’s first shift at the Bus Depo. He’s complaining to Del about the effect this job will have on his lovelife with only every second Sunday night off. Del announces he’ll take Janice out instead to make sure she doesn’t cheat on Rodney, who remains unconvinced. Changing tack with talk of Rodney’s footwear (plimsolls so he can catch criminals more effectively), Del then leaves Rodney in the dark building, stopping only to whistle eerily to scare poor Rodney out of his wits.

Back at the flat the following morning, Grandad is watching Open University (on two televisions naturally). He tells Del he used to be a security guard himself before the war. Del alludes to the fact Grandad was a crook of some sort, shocked that someone trusted him with their property. He goes on to say he worked in a big warehouse, along with a suspiciously well off floor sweeper who drove a big car and always had a new attache case. This was highly suspect to Grandad…

Grandad: Anyhow, one night as he was leaving, I stopped him and searched his attache case, it were empty. Still, unperturbed by this minor hiccup in my investigation I stopped him and searched his case every night for a whole year. Then he left.
Del: I wonder why?
G: I don’t remember. I think he claimed he was being victimised by someone, no unions in them days ya see?
D: This is it eh?
G: Coupla weeks later, Auditers came. You know what they discovered?
D: No?
G: We was missing 348 attache cases
D: You mean you’d been searching the stolen gear?
G: Yeah and I got done for it! Fingerprints! There’s a moral to this story Delboy, but for the life of me I can’t find it!

I love Grandad’s anecdotes. They’re always genuinely amusing shaggydog tales told in a very authentic manner. Lennard Pearce perhaps doesn’t get the credit he deserves next to David Jason et al for his time on the show.

Rodney is up at last, at Del’s behest, recovering from his shift. He asks Del how “I’m getting on with Janice”. Del says it’s going well, one more steak meal could crack it. I’m unclear where this plot thread is going, and I’m not sure I like it.  Rodney realises it’s still only morning and is furious at being woken, but Del elaborates on his true scheme. The tourist trade is booming, but the coach tour party trade is falling away because people are sick of the same old sights. Del has set up Trotter’s Ethnic London Tours, taking people to see the “true sights of London”. Rodney was working as a Nightwatchman so Del could have an open top bus for the tour, a family endeavour with Del as MC, Grandad distributing leaflets and Rodney as driver. Rodney, quite reasonably insists he needs sleep, he can’t work all night and then drive a bus all day, but Del promises him help, an ex-Police dog. Trouble is, that turns out to be Janice’s pet, Nero, not exactly a disciplined attack dog.

Aside from the strange Janice subplot, this was another masterful scene of moving parts. Dynamic Del selling a project to an unenthusiastic Rodney and Grandad. I was going to throw in more quotes but I would have ended up typing out the entire scene, it’s one worth looking up though!

Despite that though, I’ll say at this stage, the main plot really hasn’t grabbed me yet. The Del/Janice thing intrigues me, but I can’t put my finger on it. Is Del cheating with his Brother’s girlfriend? That doesn’t seem like something the established character would do.

We see a sign for Trotter’s Ethnic Tours on the street and the bus waiting. Noone is around, Rodney is asleep. The start time was supposed to be two and a half hours ago, but Del is unperturbed, believing the bus not to be big enough for what he has in mind. Grandad bets Del £50 that noone will turn up, Del elaborates further though, he’s charging £17 a piece for tickets (not a small sum in 1981). He’s selling Venus De Milo statues as statues of Boudica (she fell off her chariot and lost her arms). Del concedes he knows nothing about the places they’ll be visiting, but he’ll blag it. Sherlock Holmes childhood home? (Actually there may well be one of these dotted around now) The summit of Mount Pleasant? The people will be packing onto the bus soon!

Hours later, it’s dark and noone has arrived. Del though is still going strong, trying to sell the idea to Rodney and Grandad. He’ll show them Jack the Ripper’s burial place, not bothered by the fact nobody knows where that is! (Again, given the volume of awful Jack the Ripper tours around, this is probably a feature of one of them. The best established one however I went on recently and is a really interesting evening, not too graphic or gratuitous and sticking largely to facts (in the form of very well told stories)). Rodney has to go to work at the Depo so they give up for the evening.

The following morning has Grandad bringing some beers for him and Rodney, and as the bar didn’t do Pina Coladas, Del got a Mackesons. Del continues to demonstrate his ability to blag, able to make up things on the spot, including an elaborate story of how Elephant & Castle got it’s name (it involves Elephants and Castles). Quite wistfully he tells the others he’s wanted to do this for years. He’s got a dream of owning a penthouse on the South Bank with the initials of Trotter’s Independent Traders in neon letters on the roof. Through this discussion of uh…TIT, Del reveals he knows Janice doesn’t wear a bra. Rodney looks concerned that Del knows this too, but simply points out the subliminal message of Del wanting a sign that says “TIT” on his house for everyone to see. That spells the end for Del though, they return the bus. He pays up his bet with Grandad and bemoans their luck; 1000 leaflets printed and not one taker.

Can you subvert something that hasn’t happened yet? The Mum-on-her-deathbed quotes haven’t started yet, so this is interesting. We haven’t fallen into cliches or catchphrase at all yet. It’s a nice moment of reflection for Del’s character too and a recollection that seemed fond and genuine.

Del takes the sign for the tour to the dust chute, which just happens to be where Grandad dumped all the leaflets he was meant to distribute. Del of course is furious and chases Grandad off as the credits roll.

Well….what to say…this episode was STRANGE.

There are some highlights, the scenes in the flat as always are superbly scripted and acted, and we got some nice moments of characterisation too, but for the first time since the pilot, which was more about setting the scene than anything, we got a plot that didn’t go anywhere. Nothing happened, and the characters weren’t especially entertaining in that either.

The Del/Janice stuff remains a mystery unless it gets expanded in another episode. It only served to make Del quite unlikable though if the most obvious implication of it is true, which you don’t really want in your protagonist, especially one we’ve already established has some quite undesirable traits. A heart of gold is Del’s redeeming feature even at his worst, and in this episode he lost that in places.

The episode wasn’t bad per se, just dull, flat and uninspired, which after two great episodes is a real momentum killer. I hope it picks up next time.

Share
Facebook
Twitter
Pinterest
WhatsApp
Previous articleTim Cook on taking a few years to create the HomePod: “It’s not about being first, it’s about being the best”
Next articleThis Week on Impact Wrestling: Sonjay Dutt v. Low-Ki for the X Division Title