Monday Night RAW is LIVE tonight from the FedEx Forum in Memphis, Tennessee! 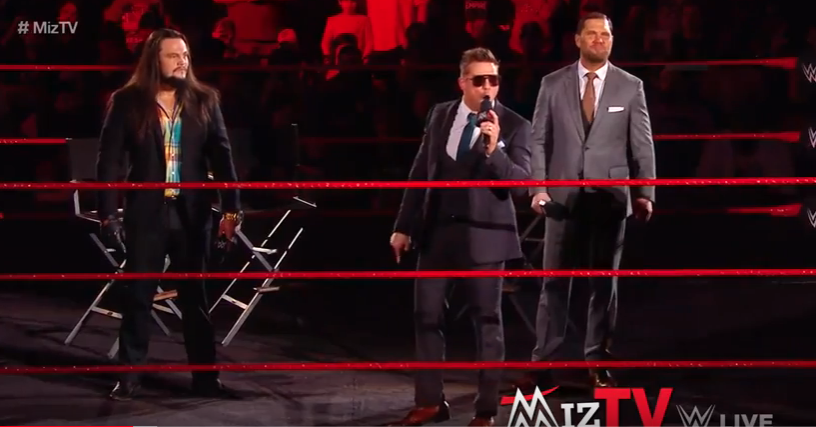 We’re exactly two weeks away from the 25th Anniversary of Monday Night RAW!  The night started with our Intercontinental Champ Roman Reigns in the ring, calling out Samoa Joe for not being ready for him.  Reigns continues with a message for the locker room, when he’s interrupted by Jason Jordan coming to the ring. Jordan mirrors Reigns statement for the locker room ‘you mess with one of the Shield, you mess with all of them’. Seth Rollins interrupts, joining Reigns as well as his tag team partner, Jordan in the ring.   Rollins goes on to say while he appreciates what Jordan is trying to do, he still has a lot to learn.  Cue the Balor Club, out comes Finn Balor followed by Luke Gallows and Karl Anderson.  Balor takes us back by talking about how he’s been teaming with Gallows and Anderson for the better part of 10 years, and took a dig at Jordan saying it’s been ‘longer than Jordan’s known Kurt Angle was his dad.’  Cue Kurt Angle’s music, and the GM comes out and makes the main event for the evening: A 6-man tag match, Reigns/Rollins/Jordan VS. Balor Club.

Before we get to the next match, we learn that The Miz is back tonight, as is Paige and Mickie James!

Next up, Sasha Banks teams up with Bayley accompanied by a returning Mickie James, to take on Sonya Deville and Mandy Rose (Absolution), accompanied by a returning Paige!  Mandy and Bayley get the match started, with Mandy taking an early lead in the match.  That is, until Bayley gains control and Mandy ends up on the outside of the ring… after the commercial break Sasha’s in the ring, with the trash-talking Mandy, but she shuts her mouth real quick when the 4-time Women’s Champ slaps her in the face!  Mandy manages to reach her tag team partner Sonya DeVille, a martial arts expert, to try and take Banks down a few notches.  Bayley anxiously waits to be tagged in by Banks, but it doesn’t happen in time and Mandy Rose tags back in, but not for long!  Sasha hooks her in an inside cradle, but there’s a kick out.  Sasha remains in control of the match and picks up the win for herself and Bayley when Mandy Rose taps out to the ‘Bank Statement’.

I don’t know about you, but I’m always curious to see wrestlers before they put their makeup on, so Goldust’s time lapse video of putting on his ‘face’ if you will, got my attention.  It’s during this video when he finds out who his mixed match tag team partner is going to be one week from tomorrow, immediately following Smackdown…drum roll please: A very enthusiastic Alicia Fox!

Next we hear the unmistakable sound of ‘Woken’ Matt Hardy’s laughter as he makes his way to the ring.  His opponent, the man who lost every single one of his matches in 2017, Curt Hawkins.  Hawkins claims he’s undefeated in 2018 so far, but that doesn’t last very long as his springboard crossbody misses and Hardy gains the advantage in the match.  With an ending that was surely a surprise to no one, Hardy gets Hawkins in a Twist of Fate and gets the 1,2,3.   However, when he turns around he’s met face to face with Bray Wyatt.  They stare each other down and maniacally laugh at one another.  Delete. Delete. Delete….

Next up, the Miz has finally returned to RAW after being away for 6 long weeks!  He’s got his Miztourage in tow, Curt Axel and Bo Dallas.  They praise Miz by telling him how amazing their 2017 was because of him, calling it ‘Mizmas’ and like ‘Winning the Mizzies!’, respectively.  Miz claims he allowed Roman Reigns to simply ‘borrow’ his Intercontinental Championship while he was away filming a movie and now he’s back to claim it.

Up next, the Cruiserweight championship match up: an on the mend Enzo Amore, just recovering from a hospitalized sickness, vs. Cedric Alexander.  In order for the title to change hands tonight, Enzo needs to lose by pinfall or submission.  Cedric gets the immediate lead in the match, Nia Jax is watching closely from the back.  Enzo gains control and throws Cedric out of the ring.  The match returns after a commercial break to Cedric doing a handspring off the ropes, and going for the pin, but it’s only a 2-count. He still has his momentum though, delivering a kick to Amore’s face while clenching the ropes.  Both men end up outside the ring, Amore’s face is all bloody and he gets counted out.  Cedric Alexander is declared the winner, but the title doesn’t change hands since the loss was neither by pinfall nor submission.

Cedric, in the back now, with Nia Jax by his side, gets looked at by a doctor who says he may need an MRI.  We then cut to RAW GM Kurt Angle on the phone, with a “mystery” woman…sounds like a yet-to-be-revealed entrant into the highly anticipated upcoming 30-Women Royal Rumble…

Onto the next match, Sheamus and Cesaro vs. Titus O’Neill and Apollo Crews.  Titus and Sheamus square off first, Sheamus starts with a kick to the midsection and runs with the lead.  Shortly after he’s tagged in,  Cesaro teams up with Sheamus to throw Crews over the ropes and pummel him into a turnbuckle.  When they make it back into the ring, Crews still has the advantage over Cesaro, and is now hammering on his left knee.  Sheamus is tagged in and continues to dominate Crews, going for a submission move with the left arm in a lock, inside cradle by Crews, but Sheamus kicks out.  Titus is tagged in and takes control over Cesaro..slams him into the mat, goes for the pin, but it’s a kick out.  Titus is distracted by Sheamus on the ropes and Cesaro takes advantage…brogue kick, but misses.  Titus goes for the roll up on Sheamus and it’s an upset!   Titus and Apollo win the match.

After the commercial break, Brock Lesnar comes out accompanied by Paul Heyman, naturally.  Heyman does his thing on the mic, telling the world how amazingly talented his client Brock Lesnar is, and why he is and should always be the Universal Champion.  Heyman and Lesnar go to leave and are attacked from behind by Kane!  Braun Strowman joins in and now we’re watching a monstrous fight in the back. Brock is thrown into a table by Strowman and Kane gets taken out by a massive road case!  Strowman doesn’t stop there though, he’s got a hook and he knows how to use it!  He manages to throw the hook onto a huge piece of scaffolding and brings it tumbling down onto both men.   An ambulance is called and EMT’s are feverishly working to get Lesnar onto a stretcher.  Kane seems to be hanging in there and doesn’t require medical attention.  Whew!

The next match is Samoa Joe vs. Rhino accompanied by Heath Slater.  Rhino and Joe exchange blows, Joe takes control over the match up.  Samoa wins by submission when Rhino taps out to the Coquina Clutch.  Quick and dirty.

Asuka makes her way to the ring next, but her time there is short lived, as Nia Jax surprise attacks her in the ring from behind!  And now folks, we’ve got ourselves a women’s match for next week…Asuka vs. Nia Jax!

Finally, it is now time for the main event!  The match made by RAW General Manager Kurt Angle at the beginning of the show, Balor Club (Finn Balor, Luke Gallows & Karl Anderson) vs. Jason Jordan and The Shield (Roman Reigns & Seth Rollins). Balor and Rollins start out the match, they go at it until Rollins tags in Reigns.  Reigns comes in and cleans up on Balor in the ring, on a turnbuckle and with a swift kick to the face!  Gallows tries to interfere and gets a sucker punch to the face by Reigns, which knocks him to the ground.  Reigns is then caught off guard and Balor takes full advantage.  Balor tags in Anderson and he takes Reigns down to the mat, pummels his face repeatedly and goes for the pin, but Reigns kicks out at 2.  At this point in the match, we still have not seen Jason Jordan in action… Reigns continues to take the beat down in the ring by Gallows and Anderson until finally Rollins tags back in.  Rollins delivers a couple of suplexes to Anderson and goes for the pin, but Anderson kicks out.  Anderson reaches for the corner to tag in Gallows, but nobody’s home.  Gallows makes his way back into the ring eventually helping out his tag team partner, when finally Jordan gets involved helping out Rollins and knocks Gallows over the top rope to the floor. Jordan is back on the outside looking in, but desperately trying to get the tag from Rollins, he doesn’t make it and gets knocked right off the apron. Reigns is now desperate to get in on this match and Rollins is trying to make the tag.  Jordan, not the legal man, gets in the ring and the ref is distracted, missing the legal tag between Reigns and Rollins.  Reigns and Jordan get into it, Reigns asks Jordan “What are ya doin?” Meanwhile, Rollins is still in the ring and needs help, but it’s too little too late, the damage has been done and Finn Balor capitalizes on the rookie mistake by Jordan.  Balor climbs up the top rope and BOOM! He lands on Rollins with the Coup de Grace for the 1,2,3 and Balor Club gets the victory!

There you have it!  This week’s re-cap and results of Monday Night RAW!