January 11, 1993, Monday Night RAW airs for the very first time on the USA Network.  January 22, 2018, RAW celebrates it’s 25th Anniversary and 1,287th episode on the same channel, at the very same venue it first debuted, the beautiful and intimate Manhattan Center in New York City.  It also took place at the Barclays Center in Brooklyn, yup, two venues for this special show!

I don’t remember exactly, but I’m pretty sure my 11-year-old self watched the very first episode of Monday Night RAW, and I was a loyal viewer every single week for years. If you told me at 11 that Monday Night RAW would still be on the air 25 years later and that I’d still be watching it, I’m not sure I’d believe you.  There’s not a lot of things I was doing at 11 that I am still doing today, but my love for wrestling has never faltered.

During the 3+ hour show tonight, there were some amazing moments, some great nostalgia and some disappointing moments as well.  Most of the time when I watch RAW, I focus on the matches, but tonight, the matches were secondary for me, I really wanted to see the superstars from years past.

My favorite moments of the night were as follows:

Stone Cold Steve Austin coming out and stunning Shane and Vince McMahon.  I will ALWAYS pop when I hear that glass break!  It’s never not going to be entertaining as hell to watch the rattlesnake put back a couple of Miller Lites, deliver a stunner and throw up a couple of middle fingers.  By the way, Steve Austin is now 53-years-old and looks great, he looks exactly the same as he did in the 90’s! I think Reby Hardy said what we were all thinking in her tweet tonight:

I want the whole show to just be Austin stunning everybody. The whole 3 hours. #RAW25

Another great moment was when the Undertaker came out at the Manhattan Center and cut a promo in the ring. I was kind of disappointed with his entrance though, the venue didn’t go dark like it usually does before he comes out. All the lights remained on when his music hit, kind of a buzzkill. However, I still got chills hearing his music hit, the man is an icon, a legend and arguably the very best character ever created by the WWE. When I was a kid, I was terrified of the Undertaker and wouldn’t go to a show if he was advertised on the card. Now, I kick myself because he’s legendary, I would love to see him live, maybe one day I’ll get to!

My favorite part of RAW 25 was when Degeneration X came out, hands down, they brought back the most memories for me. I was (and still am) a huge Shawn Michaels fan. I always loved HHH and have followed his career since his debut in WWF/E. The same goes for X-PAC, I was a fan of his since the days of the 1-2-3 Kid back in the 90’s, so I was patiently waiting for him to come out at the Manhattan Center, joining the rest of the DX crew in the ring. Oh! And then Razor Ramon came out! I had heard he’d be at RAW tonight, but good ol’ Scotty Hall has had some issues in the past, so I wasn’t sure if he’d show and/or be coherent. He’s aged, that’s for sure, but The Bad Guy was back in the ring tonight, woo hoo!  I also loved that Triple H mentioned Chyna. She was a major part of the WWE, paved the way for a lot of others, and was taken from us far too soon. I’m glad she was not forgotten tonight and was properly recognized.

Thank you @wwe and @TripleH for remembering Chyna tonight. https://t.co/f2S8sLIXRR 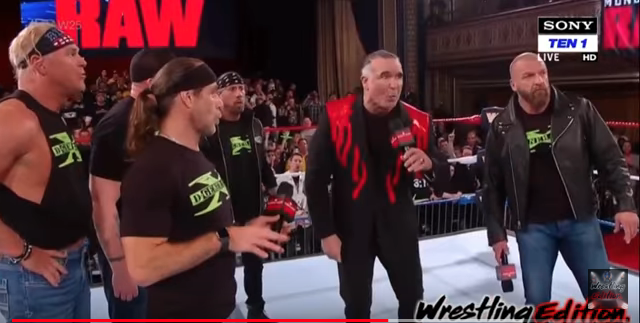 Now onto the disappointments, there were a few, mostly stemming from certain people not being on the show for one reason or another.

Where was my girl Lita?!  Ok, so I’m not even going to sugar coat it, I love Lita, she was my favorite diva, she’s the reason I got into the wrestling business, I idolize her in a totally non-creepy ‘I wish we were friends in real life’ kind of way.  When the divas were being brought out to be recognized one by one (or two by two in the case of the Bella’s), I was eagerly awaiting  Lita’s music to hit (and was ready to cry when it did), but was so stinkin’ disappointed when the last name was called and they moved on to the next segment (or went to a commercial for Hardee’s, that sounds more likely).  I was happy to see Trish Stratus though, looking amazing as always, I was always a big fan of hers as well.  So, I tweeted my lack of Lita disappointment by the way, and LITA LIKED MY TWEET!  Day. Made.

I was waiting for @AmyDumas to come out but she didn’t. 😭😭😭Lita was my girl!! My favorite of all time. At least @trishstratuscom was there though! #RAW25 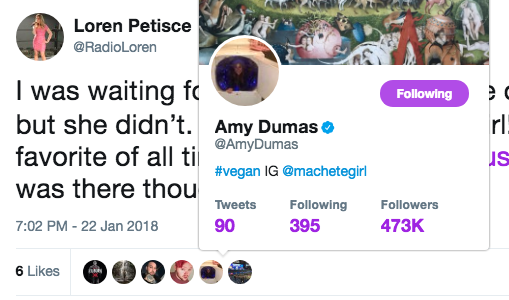 I’m kind of bummed that Kevin Nash wasn’t on RAW 25, but at least he said he wasn’t coming ahead of time, so I was prepared. He said he wouldn’t be able to make the show because he recently had knee replacement surgery and wanted to avoid any issues he may incur while flying. Understandable.

We saw Christian, but you know who we didn’t see? His best buddy, Edge! I was curious if there was a legit reason as to why Edge wasn’t there, so I googled it. Turns out, he said he wanted to be there, but was on location in Ireland, so he couldn’t make it. Boo.

A few of you wondering if I’ll be at #RAW25 tonight. If you listen to the non award winning @EandCPod you know the answer. So start listening dammit! And no, I’m on location in Ireland so I won’t be there as much as I’d love to be. I will be there in spirit.

Bret Hart, my ALL TIME FAVORITE WRESTLER (besides Lita)…I got a chance to meet The Hitman in 2014 and I cried like a child when I did…yes, it’s true.  I was so damn excited to meet my idol that I couldn’t make words, just tears.  Anyway, would have loved to see him on the show, but read somewhere that he wasn’t able to make it because he had a meeting with a hand surgeon who was flying in from Paris, and he couldn’t postpone.  I wasn’t sure if Bret still had heat with the WWE, I thought it had been squashed, but didn’t know for sure…either way, I’m sad that the best there is, the best there was and the best there ever will be, wasn’t at RAW 25.

Last by not least, where in the world was The People’s Champion? The Great One?  The Most Electrifying Man In Sports Entertainment? The Rock!  He’s been a massive part of WWE and Monday Night Raw, it seems wrong that he wasn’t there!  In fact, after the show was over, I went over all the segments in my head, assuming I’d just missed his…nope, he was not there.  I don’t know why  The Rock wasn’t there, but I imagine it has something to do with his ridiculously busy schedule.  What a shame, he’s been such an integral part of wrestling, it felt like something was missing without him.

In closing, I read a lot of comments online about what people thought of tonight’s show, some were good, some were bad, some were in the middle.  For me, tonight’s show brought me back to a simpler time in life, when I was just a kid and these performers were everything to me.  WWE has always been a huge part of my life and these people were my heroes growing up.  I believed what they said on TV, I cried when they lost the belt or turned heel, I was invested!  I know more about the insides of the business now, but WWE, you always made me feel something and I was always entertained, still am…thank you.