Here’s What Lindsay Lohan’s Beach Club Employees Have To Say About Her, & Some Insider Details on the Premiere

As an entrepreneur and boss of this new business, Lohan made her debut as a reality show star with the premiere of this show tonight, Jan. 8.

Many speculations were made about Lohan’s strict work ethic in her management role. However, the employees of Lindsay Lohan’s Beach Club spoke very highly of her to E! News on the red carpet at the show’s premiere.

Kyle Marve, one of the VIP hosts at the center of the series, said “Going into Mykonos, it was like this mental thing. Lindsay’s the celebrity, this huge figure. When I got there, she was the opposite of that.”

Marve claimed that she was personable and approachable, and made him feel like a part of the team right away.

Another employee, May Yassine, mentioned that Lohan is “not this little girl that I watched in Mean Girls, Parent Trap, and all of that. She’s a boss, like a boss lady’s walking in.”

Lohan has transformed her old reputation full of drugs, alcohol, and jail-time to a new reputation of a strong professional, businesswoman.

According to Lohan, she may come off strict when regulating her employees to be the best representatives of the Lohan brand. Her business partner Panos is more cutthroat.

Panos said, ” She’s a good boss, I can say that. She’s very realistic, she’s very good. She’s a sweetheart to me, but as for the people that work for us, she’s a bit strict sometimes. But I’m worse, so don’t worry.

Mykonos is held to a very high standard. “It’s beautiful, it’s open-minded and most of all, it’s safe,” said Lohan.

Watch this video of Lohan answering the toughest workplace questions and see how Lohan would handle these real-life work situations:

A fun fact about Lohan is that she’s a really good cook, according to another employee Sara Tariq. She also mentioned that Lohan made her cry a couple times because she keeps it real.

It’s understandable that Lohan’s managerial style leans toward the harsh side because she has been through years and years of critiqued spotlight.

Alex Moffitt said, “I don’t think she has the patience sometimes to just be soft with people.”

During the premiere episode, Lohan walked into the house where the employees are staying. She said she felt like she walked into “Girls Gone Wild,” and doesn’t want the people from America to party too hard.

Also in the premiere, Lohan said she is religious in the sense of meditation as her own personal religion. She finds the space that she needs to function.

A key component of the Lohan Beach Club is customer satisfaction.

“All of the guests must be treated with royalty,” said Lohan.

On This Day: Mean Girls Was Released In 2004

It’s been 14 years since the iconic teen comedy ‘Mean Girls’ was released in theaters.

Since then, we’ve tried to make ‘fetch’ happen, we’ve let people know if they can sit with us or not, we’ve worn pink on Wednesdays, and we’ve asked our friends if they wanted to do something fun…”you want to go to Taco Bell?”  The movie has so many memorable, relatable, quotable lines…we even post a meme every October 3rd, because that’s the day Aaron Samuels turned around in math class and asked Cady if she knew the date and she answered ‘it’s October 3rd’. 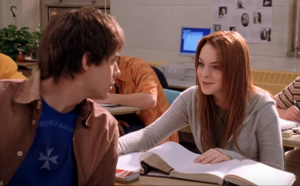 It was this day back in 2004, we were all introduced to ‘The Plastics’ and the ‘Burn Book’ and it’s the movie that skyrocketed Lindsay Lohan’s career.

We learned a lot from the movie as well, not all ‘mean girls’ stay ‘mean girls’.  Regina had a life-changing experience and quite the personality transformation after she got hit by a bus; and Cady learned who her true friends were all along,  Janis and Damian.  We learned that it’s important to be nice to one another and accept others for who they are. 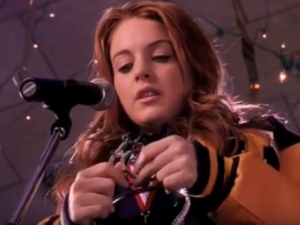 In celebration of another year of ‘Mean Girls’ greatness, now is as good a time as any to let you know:

“She doesn’t even go here!” 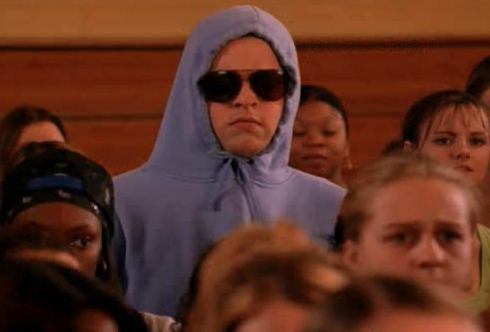 Lindsay Lohan is on her way to rehab, and on her way there, she is picking up some serious checks. According to TMZ, all she has to do is hang out in South Africa to get this pay check. She is also scheduled for an episode of Charlie Sheen’s Anger Management.

Lindsay Lohan has scored herself a HUGE paycheck before she goes into rehab, and TMZ has learned she’ll be earning her keep by hanging out in South America.

Our sources say Lindsay will head down to Brazil on Wednesday (with a small entourage in tow) after she shoots her appearance on Charlie Sheen’s show, “Anger Management.” We’re told Lindsay is scheduled to shoot her scenes Monday and possibly Tuesday.

The money will certainly come in handy. As TMZ first reported, Lindsay was recently hit with another tax lien in the amount of $56,717.90 … in addition to two other liens she has outstanding.