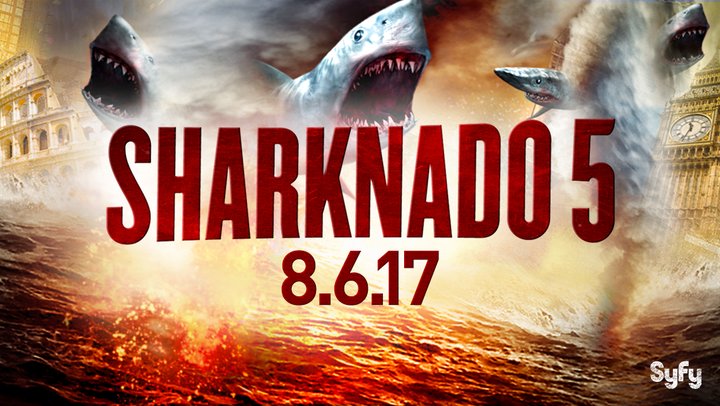 NEW YORK, NY – June 1, 2017 – Pack your passport and grab a chainsaw, because SHARKNADO is going global! Taking the world – and unsuspecting celebrities – by storm, the movie event of the century blows into town this summer, and today, SYFY and The Asylum revealed its chilling title:SHARKNADO 5: GLOBAL SWARMING. The latest installment in the hit pop culture franchise premieres on SYFY Sunday, August 6 at 8/7c and will air in more than 100 countries.

SHARKNADO 5: GLOBAL SWARMING and the film’s official tagline, “Make America Bait Again!,” are the result of a fan-sourced social initiative launched this April. Calling on fans for inspiration, SYFY invited Facebook users to submit their most creative and outrageous ideas via an interactive bot.

In SHARKNADO 5: GLOBAL SWARMING, the mission gets personal for Fin Shepard (Ian Ziering) and his bionic wife, April (Tara Reid) when their young son gets trapped in a traveling ‘nado and transported all over the world. From London to Rio, Tokyo, Rome, Amsterdam and beyond, our globetrotting heroes will seek assistance from a highly-skilled squad of royals, scholars and Olympians, enlisting famous faces from news, entertainment, and sports in their most epic battle yet.

SHARKNADO 5: GLOBAL SWARMING, a production of The Asylum, is directed by Anthony C. Ferrante based on an original screenplay by Scotty Mullen.