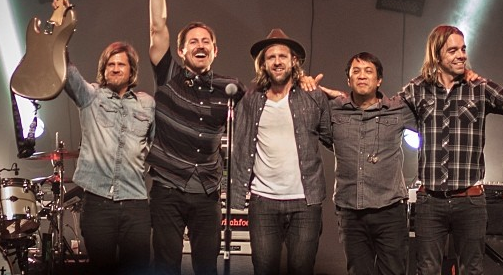 Well, it’s time for me to talk about how much I love certain bands and why I was so excited to see Switchfoot  live on Friday night at the Wiltern in LA. This is actually life coming full circle. The first time I ever saw a full switch foot concert was at the Wiltern. To say I was excited is an understatement.

The show started with the opening act who I think LA fell in love with right away, the royal concept. The band has an electronic pop-rock sound that electrified the crowd. The lead singer brought humor to the show. It was definitely worth being early to the performance.

One thing that switchfoot has consistently had is great opening acts.

Now it’s time for switchfoot. The band came out and played nearly two hours. They played their biggest hits from the past including Stars, Dare you to move Meant to live. They some of their newer stuff of the new record Fading West.

Jon foreman will forever be one of my favorite entertainers. He takes the experience of a concert to the next level. I have never seen a performer go over and beyond to make sure that hey went out and was apart of the show. I’ve also never seen a singer so humbled to be playing in front of a sod out Los Angeles crowd.

Switchfoot brought out a few musicians to help with Meant to Live and broke the song down acousticly for about a third of the song. It was seriously amazing. Here’s a video you can check it out at:

9 albums into their career, switchfoot is like a fine wine – getting better in time. I cannot wait for what comes next. You can go to switchfoot.com to to find out what venue they are playing near you.