Suits Season 8 Premiere: The War For Zane, Specter, Litt Is On 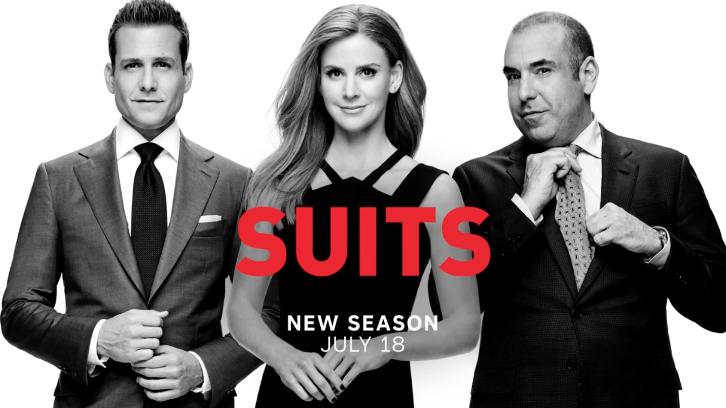 Suits returned to television last night. Season 8 will be the first season without Patrick J. Adams or Meghan Markle on the cast.

The show opens with a recap of season 7’s ending and then it’s back to where last season ended: The wedding to end all wedding. Well, the party. But still.

We see Harvey Specter and Robert Zane sitting at a table trying to figure out what name they are going to call their newly merged firm. Will it be Specter, Zane, Litt, or Zane, Specter, Litt. Either way, Litt goes last, according to the two of them.

We then cut to seeing Alex William played by Dule Hill running to his home where Specter is waiting for him. Specter drops the news that Zane is joining the firm. Williams is upset about the idea of Zane becoming a name partner before him.

Specter promises that William’s name goes up next.

We are in Louis Litt’s office with Katrina Bennett and they are discussing the merger between the two firms. Katrina is the only associate who has worked for both firms.

We then see Zane and Donna looking into Rachel Zane’s office. The two have a sentimental moment over Rachel’s departure. Zane then tells Donna that he plans on being a managing partner, setting up what I believe will be the story arch for the season.

We cut to the opening credits and the show debuts their new opening signature. It’s really cool and fresh. This is the first time in 8 seasons that the show updated their opening credits.

We are back from commercial break and we see the three powers at be in a conference room. Litt is leading the meeting and says that they need to decide who they are going to drop from their client list to avoid conflict of interest. Litt makes a suggestion to get their clients to drop the conflicted departments.

Donna then talks to Harvey about not sabotaging the mission. Harvey says that he won’t sabotage it. He then goes to Williams and asks him to go and try to get him to get Zane’s client to drop their manufacturing division.

Zane goes into a gym and talks to his right-hand woman to get Harvey’s client to drop their division instead.

We go to commercial and return with Katrina and Louis in his office. Katrina is asking for the opportunity to fire the least efficient associates.

We return from commercial and we see Katrina and Brian (an associate) having lunch. Brian catches on to the idea of him being fired and ends up making the situation worst. Katrina ends up firing him and then leaving the bill with him. Ouch!

Williams and Litt are in Litt’s office and the two have a good moment where they made amends. Brian is seen walking to Litt’s office to confront him on the firing situation. Litt and Brian have a moment and Brian walks away from the conversation with his head up.

Litt then confronts Katrina about the firing. She’s claiming she tried to save Brians job. A very heated conversation. Harvey is then given a proposed contract from his client proposing to sell his clients division.

Harvey then talks to Robert Zane and demands that they stand down. The fight for managing partner is in full force with Zane up a battle.

We are back into Robert Zane’s office with Specter. Specter conceded managing partner position and Specter asks for his old office back.

New friendships and alliances are being made in the firm.

Commentary: This was a good show for their reset season. Feels like they are going to be setting up an all-out war for control of the firm and for the first time in the show history, Louis isn’t the one who is looking for control.

I also feel like they are setting up Dule Hill’s character as the new Mike Ross. It will be interesting to see how the characters work out.