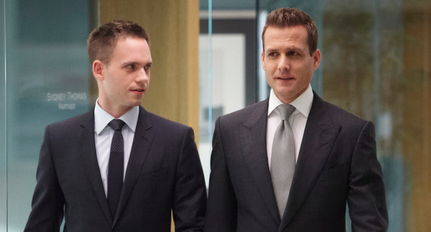 Suits left us in the fall with Mike Ross being arrested for conspiracy for committing fraud. Suits comes back we heard the voice of ADA Anitta Gibbs (played by Leslie Hope) talking to Mike about what is going on. Gibbs is the perfect character to oppose Harvey Spector.

The entire episode is Harvey and Mike trying to figure out who sold him out. Was it Scottie? Or was it Trevor? Maybe someone inside the firm. Louis is being a team player (for once) and he lets Donna do her Donna thing and try to help Harvey (and also makes for one of the most hilarious hug scenes ever).

This is a great episode. Who do you think did it?
Interviews with the cast.