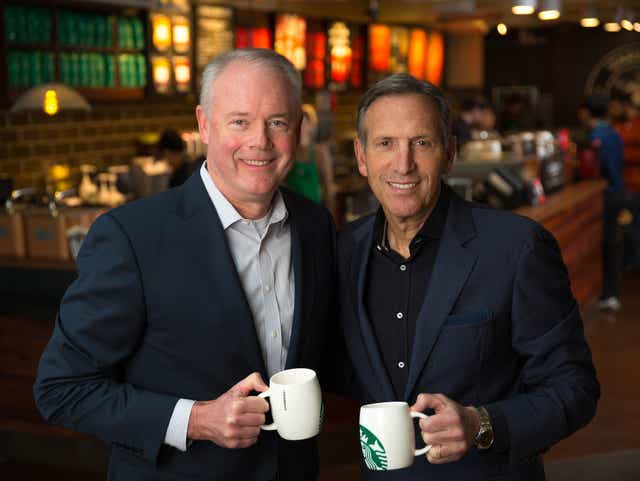 After 5 years as CEO, Kevin Johnson is retiring from Starbucks. Howard Schultz, the former CEO and a failed Presidential hopeful, is returning as CEO for a third time, the New York Post reports.

Johnson announced his retirement Wednesday morning. Schultz’s return is a temporary appointment. He will be compensated $1 for taking over as CEO.

“A year ago, I signaled to the Board that as the global pandemic neared an end, I would be considering retirement from Starbucks,” Johnson said in a statement.

“I feel this is a natural bookend to my 13 years with the company.”

Johnson will officially retire on April 4. He says that he is “fortunate” to have Schultz willing to step back in.

“As I make this transition, we are very fortunate to have a founder who is able to step in on an interim basis, giving the Board time to further explore potential candidates and make the right long-term succession decision for the company.”

Johnson is credited for helping the company jump into the digital era they are in now. He is also responsible for Starbucks entering China.

Schultz has already said he does not plan to be the full time CEO,

“When you love something, you have a deep sense of responsibility to help when called,” he said.

“Although I did not plan to return to Starbucks, I know the company must transform once again to meet a new and exciting future where all of our stakeholders mutually flourish.”

Schultz added: “With the backdrop of COVID recovery and global unrest, it’s critical we set the table for a courageous reimagining and reinvention of the future Starbucks experience for our partners and customers.”