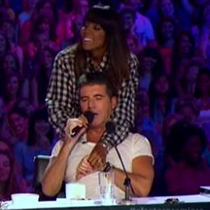 After over a decade of criticizing singers for a living, Simon Cowell has revealed what his own singing voice sounds like.

On Thursday’s “X Factor,” he sang a line of what was supposed of Elvis’ “Can’t Help Falling In Love.”

The impromptu song was brought on by a joke from fellow judge Demi Lovato.  Following a less than impressive audition from one hopeful, Demi remarked that she had a feeling the contestant’s voice is what Simon’s would sound like.

The 54-year-old father-to-be refused to take the mic, until new judge Kelly Rowland jumped onto the stage to fetch the contestant’s microphone for him.  Kelly then held him down to his seat and with the microphone in his face, leaving him no choice but to please the crowd.  After singing, Simon said, “Thank you. That will never be aired.”

Auditions continue on season three of “X Factor” next Wednesday on Fox.