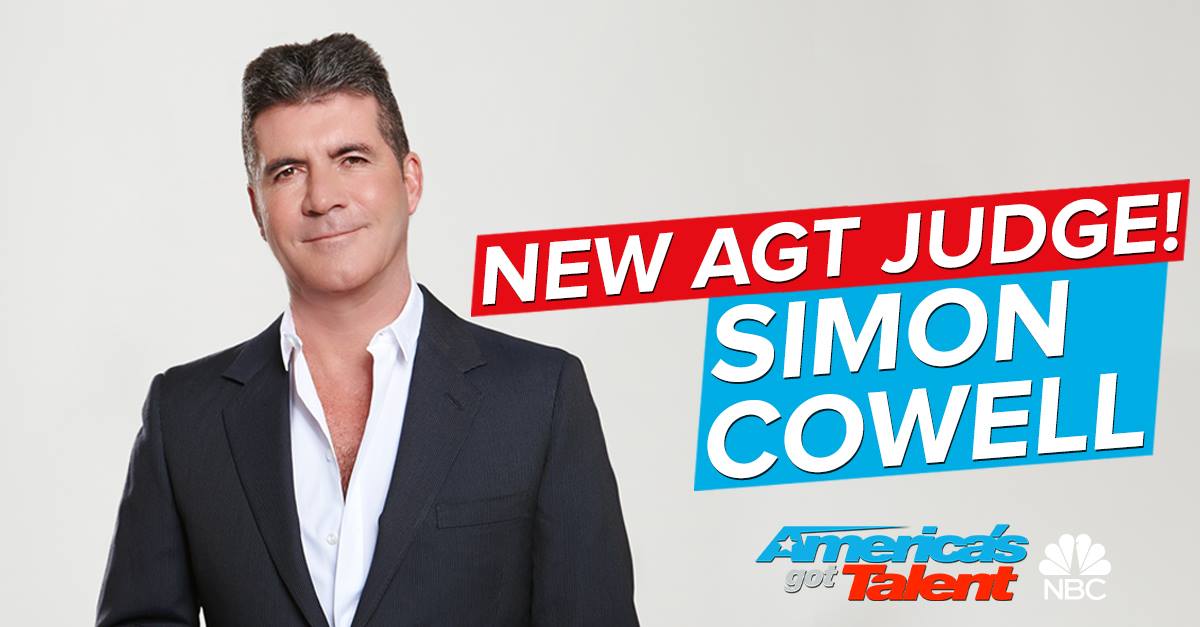 UNIVERSAL CITY, Calif. – Oct. 22, 2015 – Simon Cowell will be taking to the judges table for the upcoming 11th season of NBC’s summer hit series “America’s Got Talent.”

Cowell created the “Got Talent” format that first launched with “AGT” in 2006. It is now the most successful TV format of all time.

“I am really thrilled to be joining ‘America’s Got Talent’ next season,” said Cowell. “What I love about this show is that it’s open to absolutely anyone. America has some fantastic talent just waiting to be discovered, and I would like that talent to come to our show, including any dogs who can sing!”

“Simon knows this format better than anyone and he’s been producing the show with us since the beginning, so we’re thrilled to have him to step in front of the camera and take his rightful place at the head of the judges’ panel,” said Robert Greenblatt, Chairman, NBC Entertainment. “We welcome him to the on-screen NBC family.”

“As the creator of the ‘Got Talent’ format, he genuinely loves the show more than anyone and is uniquely qualified as we take ‘AGT’ into its next decade,” said Paul Telegdy, President, Alternative and Late Night Programming, NBC Entertainment. “We can’t wait to see the incredible acts the show will uncover as we head into season 11.”

Said Trish Kinane, President of Entertainment at FremantleMedia North America and executive producer of “America’s Got Talent”: “Quite simply, Simon Cowell is one of the best judges of talent in the world. He has a brilliant ability to identify acts with raw talent and develop them into superstars. We are delighted to have Simon’s honest critique at the judges table for season 11 of ‘AGT,’ entertaining audiences and sparking conversation as we search for America’s next great talent.”

Cowell, who will continue his role as executive producer of “America’s Got Talent,” is a music executive, TV producer and star of some of the highest-rated television shows in the world. His discerning eye for talent and candid remarks have transformed popular culture and made him a household name across the globe, influencing TV and music for more than a decade.

Simon Cowell’s Syco Entertainment, a joint venture between Cowell and Sony Music, is one of the world’s leading global music, film and television production companies responsible for some of the most successful global TV and music franchises. Syco’s television assets include the global franchises “The X Factor” and “Got Talent,” both of which are co-produced by FremantleMedia. Syco’s music artists include One Direction, Fifth Harmony, Little Mix, Susan Boyle, Il Divo, Labrinth and Ella Henderson. In total, Cowell has worked with artists selling more than 380 million records worldwide.

“America’s Got Talent” has long crowned winners who have had wildly successful careers, including ventriloquist extraordinaire and season two champ Terry Fator, who has performed to sold out audiences at the Mirage Hotel in Las Vegas since 2008; magician Mat Franco, who won season nine on “AGT” and began his Las Vegas residency this past August at the LINQ Hotel; season five quarterfinalist and classically trained violinist Lindsey Stirling, whose debut album racked up 97 million YouTube views and whose 2014 second album, “Shatter Me,” debuted at #2 on the Billboard Top 200 chart; and season five finalist Jackie Evancho, who auditioned for “AGT” when she was only 10 years old and saw her debut EP “O Holy Night” go platinum with sales exceeding 1 million copies.

This past season of “America’s Got Talent” on NBC averaged a 2.9 rating, 10 share in adults 18-49 and 12.5 million viewers overall with its Tuesday edition, ranking it the #1 among summer alternative series in total viewers for a 10th consecutive year and delivered its most-watched season in four years.

The “Got Talent” format, co-owned by FremantleMedia and Syco Entertainment globally, holds the Guinness World Records title for the highest number of adaptations, making it, officially, the World’s Most Successful Reality TV format, now airing in 183 countries worldwide with more than 500 million global viewers since 2006. “Britain’s Got Talent” has remained the U.K.’s #1 entertainment show since it first launched in 2007. In 2009, “Britain’s Got Talent” discovered the global singing career of Susan Boyle, who has sold 19 million records to date.

Auditions for the upcoming Season 11 of “America’s Got Talent” are currently underway. The hit talent show will kick off auditions in Detroit on Nov. 7 and make stops in 12 U.S. cities, including New York (Nov. 14), Phoenix (Dec. 3), Salt Lake City (Dec.5), Las Vegas (Dec. 6) and San Jose (Dec. 8). Full details on the nationwide tour, including additional cities and the ability to audition online, can be found by visiting www.AGTAuditions.com.