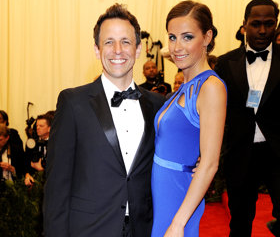 Here’s a weekend update for you: Seth Meyers is married!

The “Saturday Night Live” funnyman and future host of “Late Night,” 39, said “I do” to human rights lawyer Alexi Ashe on on Martha’s Vineyard in Massachusetts.

Us Weekly reports the bride wore a cap sleeve lace dress while Meyers opted for a dark colored suit.

There were plenty of famous guests in attendance…

The small island, where President Obama and the first family vacationed earlier this month, was buzzing leading up to the holiday weekend wedding, which took place at September 1. That’s because guests including Tina Fey and Amy Poehler were spotted, and word spread quickly with locals and vacationers about a “‘Saturday Night Live’ wedding.

Ashe’s parents own a home on the island and she and Meyers, who met at a wedding and dated for several years before confirming their engagement in July, have visited many times together this summer and in years past.

There is no doubt that tears were shed at the ceremony, including by the groom himself.

“I’m a crier,” he told Elle in 2012. “When my girlfriend and I talk about being happy, I’ll get choked up, which I think is the greatest gift you can give a girlfriend.”

And earlier this month Meyers talked to Jimmy Fallon about wedding planning, which was in full swing, hinting a beach wedding was in the works.

“Every now and again, she’ll throw me a courtesy question,” he said. “Do you think the invitations should have seashells or lighthouses? I’ll be like, ‘Seashells?’ And she’ll be like ‘… Not lighthouses?'”

None of those small details matter anymore … just the happily ever after part.