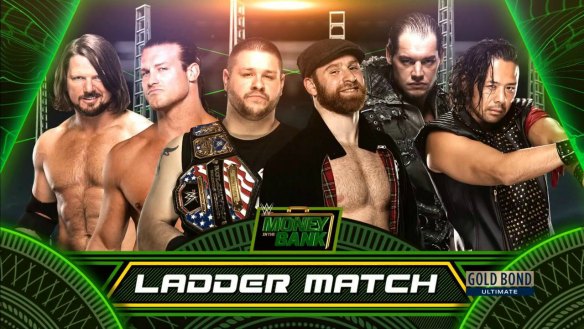 It’s showtime! The night starts with a recap of the weeks leading into Money in the Bank!

The show is hosted by Tom Philips, Byron Saxton and JBL.

The first ever Women’s Money in the Bank (MITB) match. Charlotte Flair kicks off the show. Charlotte is over in St. Louis. 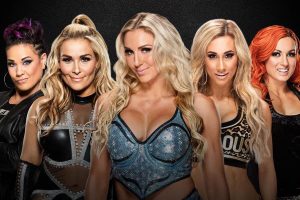 Becky Lynch is out next. What happened to her? She used to be one of the most over Women Wrestlers. It took her a while to get cheered by the crowd. Out next is Tamina Snuka (Who?). I don’t understand why she’s in this match other than her being on the roster. Carmella is out now with James Ellsworth. Carmella looks great! Natalya is on her way to the ring. She needs to win this. She’s the one who can make this MITB briefcase work.

We cut back to WrestleMania watching Naomi winning the Women’s title. Now we are looking at all the great Women’s champions of the past.

It’s bell time, and all the women except Tamina go out for ladders. Is she the only smart women on Smackdown? Tamina takes out all the competition and is left in the ring by herself with a ladder. She attempts to take the ladder on her own and Charlotte stops her. Now Charlotte is taking control of the match.

Tom Philips points out that it’s been two years since Tamina’s last championship opportunity. Becky Lynch takes down Tamina. Becky and Natalya have a tug of war over the ladder and end up using the ladder to take down Tamina. Finally, Becky realizes she can use the ladder to push into Natalya. Eventually, Natalya slams Becky onto the ladder. Natalya is the first one to try to get the briefcase. She actually grabs the briefcase. Charlotte tried two times to stop her but fails. Third time is the charm with an Electric Chair off the ladder.

Charlotte repositions the ladder, an obvious time killer. She tried to climb the ladder but Carmella stops her. Carmella is trying to get the case now but Charlotte stops her this time. The two women fight at the top of the ladder. Charlotte is able to grab the case but is stopped. Tamina comes in and knocks over the ladder.

Becky finally gets her chance to climb the ladder and try to touch the briefcase. Carmella stops her. It looks like WWE is trying to set up Carmella to be the next big thing in the women’s division on Smackdown. I don’t think she will win.

The crowd begins to chant “Becky! Becky!”. James Ellsworth stops Becky and throws her off the ladder. Ellsworth starts to climb the ladder and the crowd is chanting “No! No! No”. He grabs the case and throws it down to Carmella. The bell rings. The refs argue! This is really stupid. I hope this isn’t the real finish. The energy is in the arena is sucked out. If this is the final call, the energy is going to suck!

Commentary: This was a decent match. But this ending was seriously stupid. I cannot believe that this is what the WWE decided to go with.I see them doing another match soon.

We are back for an interview with Lana. Lana says that the other women are lucky that she wasn’t in the MITB ladder match because she would have won the match.