Welcome to WWE’s Battleground. The show is kicked off with The New Day. 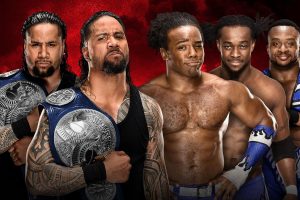 The New Day is out first. The Usos come down to the ring to defend their title. The WWE takes us back to the rap battle on Smackdown a few weeks ago. Tom Philips reminds the WWE Universe that Jey Uso had a career threatening injury at hands of the New Day.

Kofi Kingston is up first for the New Day against Jey Uso for the Usos. Jey Uso tags in Jimmy and corners Xavier Woods on their side of the ring.

There is a “Uso’s Suck!” chant for a minute. The Uso’s have complete control over the New Day. Jey Uso attempts a super plex but Woods is able to stop Jey for the moment. Woods hits a missile drop kick from the top rope. Kofi is tagged in against Jimmy Uso. Kingston is taking control of the match. Woods sends both Usos out of the ring and attempts a freefall but fails. The Usos catch him and powerbomb him.

Jimmy Uso attempts a splash on Woods but Woods moves out of the way and hits some cool new move. Two count for Woods. Woods attempts an Honor Roll move but misses and is hit with a Samoan Drop. Jey goes for a splash in the corner, Woods gets out of the way and Jey tags Jimmy. Woods tries to take control of the match again. Woods goes for a splash on Jey and Jimmy hits Woods with a superkick.

The Usos can’t believe that Woods kicked out of the move. Kofi is back into the ring and hits a Midnight Hour and gets a two! Jimmy Uso hits a Superkick on Kingston and Jey hits a splash; Kingston kicks out at 2! The Uso’s are going for a double splash. They miss. Woods hits an elbow drop and gets a three count!

The announcers take us back to WWE’s Money in the Bank to set up the next match of Shinsuke Nakamura v. Baron Corbin.

The NWO Are Reuniting And Going On Tour:...

Chris Jericho Talks About His Deal With AEW,...

Women of Wrestling Is Coming To L.A. Comic...

WWE Takes you behind the scene’s of their...