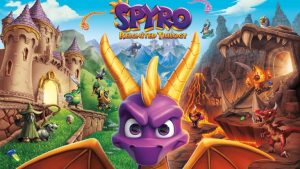 Toys for Bob recently released one of the most incredible remasters in years: Spryo Reignited Trilogy. After playing and completing one hundred percent of these two incredible games, I have moved on to Spyro: Year of the Dragon. With the utmost certainty, I can tell you, Spyro is back and better than ever. Gone are the days of Skylanders: Spyro’s Adventure and whatever that game was trying to do. Back is the awesome purple dragon I have come to love.

First off, the game is beautiful. All three of the games look exactly the way I had pictured them in my head since I was a little kid playing on the original PlayStation. I know that some of the redesigns of the characters and enemies got some hate for the way they look now, but honestly, I love the way Toys for Bob has recreated all these amazing characters. Back in the day, the models for these characters were all blocky polygons, so it took some imagination to visualize how some of the characters looked. Today, the game has colors that are truly awesome. Overall, the graphics are amazing.

Mechanically, I feel this game plays even better now. For those of you who are worried if they capture the same feel as the originals, do not fear. Toys for Bob remade everything, down to about the exact frame as the original games. For example, the way the charge attack feels when you hit an enemy or break a pot is incredible. The fluidity of the movements has improved to such extent that even attempting super charge runs in levels like Tree Top is significantly easier. Mind you, Tree Top, still requires the correct timing, but it was so much easier to run than in the originals. However, the games don’t feel too different. It’s still the Spyro we know and love, it simply has a smoother ride when playing.

The story across all three games are different adventures for Spryo. Spyro: Year of the Dragon has much more of a plot than the other two games. However, this is a callback to the 90’s experience of the story. Gameplay took the forefront while the story took a supporting role. This isn’t necessarily a bad thing—sometimes as a gamer we want to just have a nice, easy game that tells us where to go and what to collect. Spyro is just plain old fun and the little story that goes along with it is really has some great humor in it. Hearing Spyro be the king of sass adds so much joy to the game. If you were wondering who is the voice behind our dear purple dragon, it is none other than Tom Kenny. He actually redid the lines for the original game as well so that we have one clear voice for Spyro.

Overall, Spyro Reignited Trilogy is a faithful and incredible return to form for the purple dragon. Whether you are playing it for the nostalgia or if you are a newcomer to the series, you will find the game has so much to offer in either regards. The game is roughly around 20 hours to beat if you put 100% effort into all three games. It also has the nice price of only forty dollars. I highly recommend you give these games a try. Playing Spyro was some of the most fun I had as a kid. I couldn’t be more happy to see them brought back to life in such an amazing way. I hope to see Toys for Bob continue their journey with Spyro and make brand new games for new generations to see. The purple dragon is back and that’s why I give this game a perfect 10/10 rating. Now go and find those gems everyone!

Megyn Kelly Nears Exit Deal With NBC, Is Expected To Get Paid $69 Million

One Word or Less Comic Reviews for April...

One Word or Less Comic Reviews for May...