Fantastic!  Exceptionally well done!  Hilarious!  Outstanding!  Those are just some of the adjectives I used to describe the Broadway production of the 2004 motion picture, ‘Mean Girls’.

My husband surprised me with tickets to the show for my birthday last week, for what would be my very first Broadway show!  We arrived for the 2pm matinee showing just a bit early so we could check out the ‘Mean Girls’ merchandise selection and find our seats.  The merch was cute, but a tad overpriced as you would probably expect for a show in NYC.  I did pick up a “You’re Like Really Pretty” mug however, before going in to find my seat. 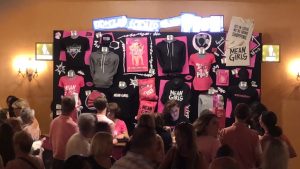 There isn’t a bad seat to be found inside the August Wilson Theatre.  The interior is stunning and whether you are seated on the first level or in the mezzanine, you will have a great view of the stage!

The pre-show stage production was beautiful, very colorful and reminiscent of the 2004 movie, with photos resembling pages from the infamous ‘Burn Book’ with handwritten captions like “Shane Oman…HAWT, but dumb, but HAWT…” 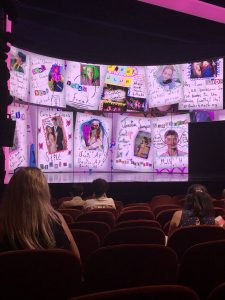 While I was very excited for the show, and was certain I’d enjoy it since the movie is one of my favorites; I wasn’t sure I would be able to embrace the Broadway stars in the same way I embraced the Hollywood stars who played the original parts in the movie.  I was wrong.  From the moment the show began, the actors and actresses portraying the stars from the movie proved immediately that they were worthy, perfect for their respective roles and exceptionally talented.  I was blown away from the start of scene one to the last bow at the end of the show.  The show was cast perfectly, I loved every single character in the production, and though it was hard to pick a favorite, if I had to choose, my pick would be Gretchen (played by Ashley Park).  She absolutely killed it, playing the part of Gretchen!  Her ability to act, sing, dance and run around in giant stilettos on stage simultaneously and flawlessly, was astounding.  I don’t think there’s anything that girl CAN’T do!  Regina George, played by Taylor Louderman, was a fabulous bitch!  I mean that in the most sincere way possible of course!  She too was flawless in every way and also impressed me with her amazing ability to sing, dance and act simultaneously and perfectly!  Taylor was the perfect choice to portray Regina…nailed it!!

There were some small changes made to the show, which were not very noticeable and did not effect the story or production at all.  For example, Janis Ian had a different last name on Broadway than she did in the movie, she was Janis Sarkisian this time.   There were some small memorable parts from the movie that were left out of the Broadway production, as I imagine it must be difficult to include every single phrase and scene.  For example, you will not see Karen ask Regina if she wants to ‘go to Taco Bell?’, Regina doesn’t exclaim ‘Boo, you whore!’ to Karen over the phone after she fakes being sick, and Karen doesn’t have a “fifth sense” or “ESPN”.  Speaking of Karen though, Kate Rockwell pulled off that part fabulously, she was hilariously dumb!  Again, I mean that in the most sincere way possible!

However, MANY notable scenes and quotes DID remain in the Broadway production.  I don’t want to spoil it for you, so I’ll just name a few.  There IS a burn book.  Aaron Samuels does ask Cady what the date is, (Oct. 3rd). And Regina did wear sweatpants and wasn’t able to sit with the Plastics at lunch.

There were also some added parts to the show, small scenes that I believe made the show better.  For example, social media was incorporated into the show, which makes sense for a production running in 2018.  The movie didn’t have that because social media really wasn’t much of a “thing” yet when Mean Girls was released in 2004.  There was some mild swearing in the show, which personally I found hilarious and not offensive, but just FYI if that’s not your cup of tea.  I was asked by a few people about the music in the show…whether it was good, whether the show was mostly music and how it all fit together in the production.  The music was good, the singing was excellent, and no the show was not all music.  I felt that the songs came in at exactly the right time and that the music/dialogue ratio was perfect.  The songs were written specifically for the Broadway show and I believe were sold on CD at the merchandise booth. 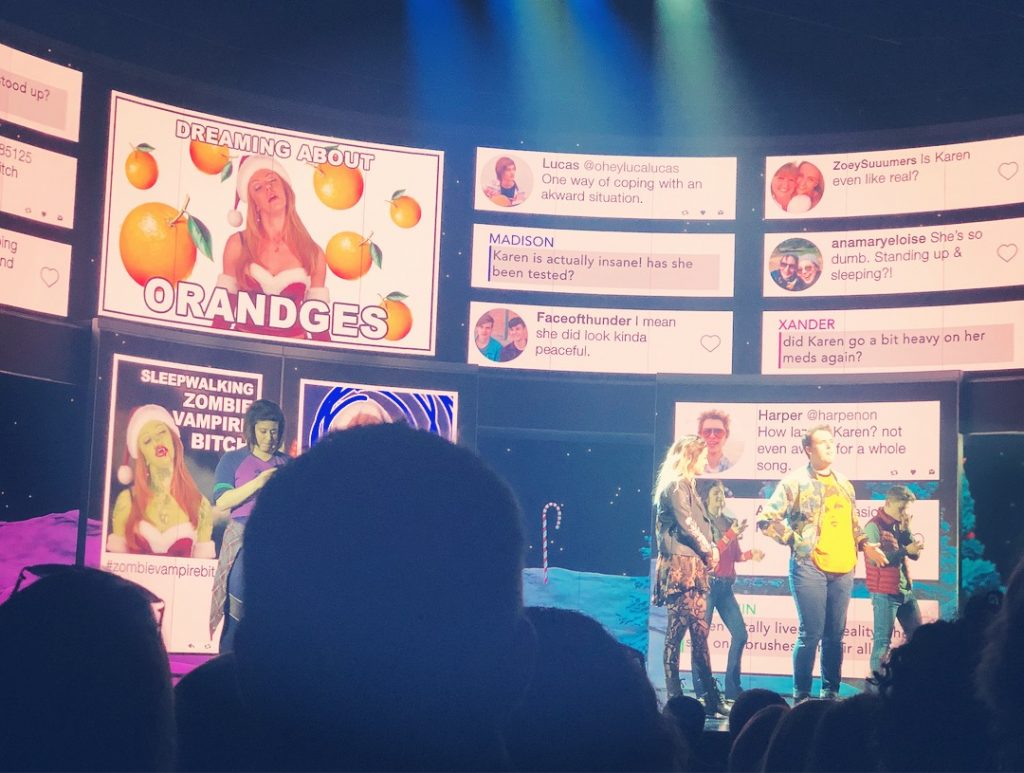 I had one tiny gripe about the production and while I believe they weren’t wrong in doing this since they were likely “catering to their audience”, I personally didn’t care for the political innuendo.  There were a few small left-leaning political jokes, which most of the audience found entertaining.  Regardless of whether it’s left, right or center, I personally don’t like politics involved in my entertainment.  I understand why they did it, and I wasn’t particularly upset, I would have just preferred that politics be left out, that’s all.

All in all, an absolutely fabulous production!  I laughed a lot, it was really, really funny and I even cried at the end, not because it was sad, but because I was sad that it was over!!  Bravo!!  I give Mean Girls on Broadway 10 out of 10 stars!!  You go Glen Coco!! 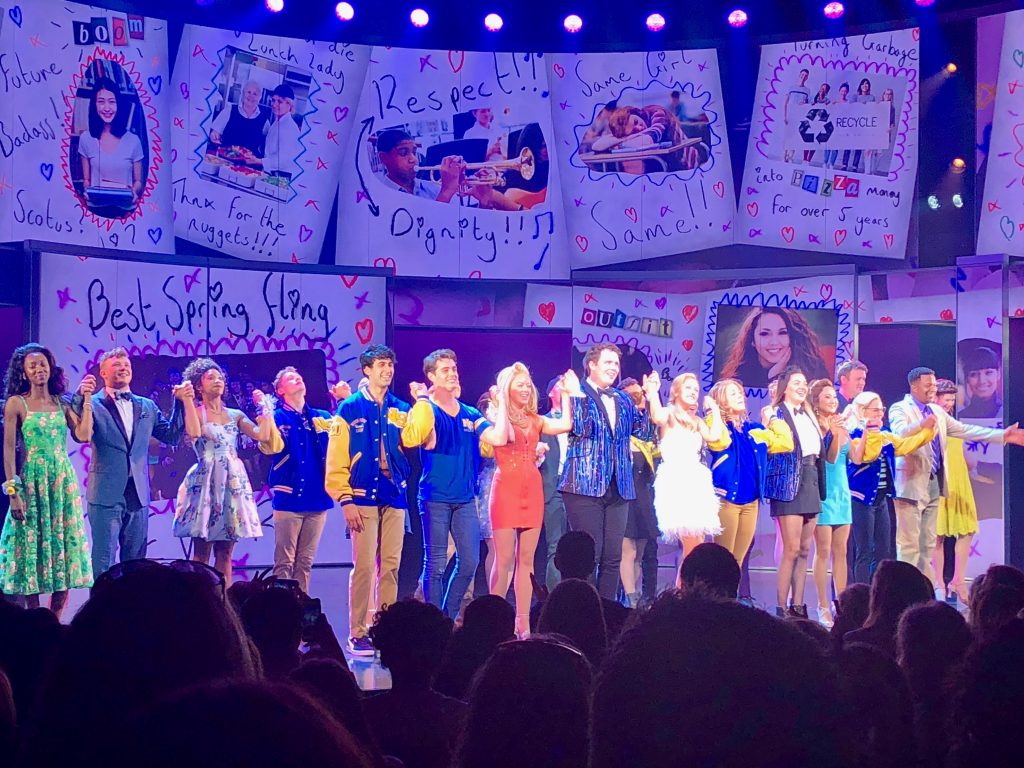 The Shortlist: Most promising actors under 25

Watch The FINAL Trailer For ‘Rise of Skywalker’

Happy Birthday To The King of Pop: Michael...

Sundance London: Peaches Does Herself