It has only been a couple days since Chris Cornell was found dead in his hotel room after a Soundgarden concert in Detroit. Medical examiners ruled it to be a death by suicide, which made the story even more surprising and unfortunate. Fans of the late singer shared their thoughts on the singer’s death on Twitter, and it just goes to show how much of an impact Cornell’s music made on everyone. 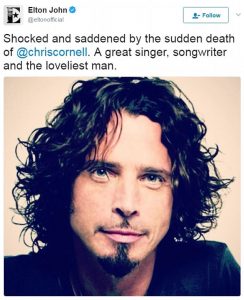 Growing up, it was so rare that we didn’t have something Chris Cornell playing. Without even really knowing it, I was introduced to the music from Audioslave, Soundgarden, and Temple of the dog and fell in love with it all immediately. When he released his third solo album, Scream (2009), it easily became one of my favorite albums of that year… mainly because my dad had it on repeat… but I never got tired of listening to it, even to this day. His music has been around in my life for as long as I can remember and, in someways, it was kind of like home to me, and anytime I’d hear a song I’d think to when we’d be driving in the car and my brother and I would be jamming out in the back seat, not 100% sure of what the lyrics were and what they meant, but we were still jammin’. My parents have introduced me to a wide range of music, but any of Cornell’s music in particular I’ve never got tired of, and probably never will. It’s the little things.

Cornell’s death was shocking and devastating in every way possible.  It’s rare that I get emotional over celebrity deaths, but this one was definitely one of the harder ones. It’s hard to believe that we won’t be hearing his voice on any new tracks. (Any unreleased songs anywhere?!)

College student who loves binge watching shows on Netflix, and The Voice. Follow my life on Instagram: Marissarami_

Who Is Daniel Durston?