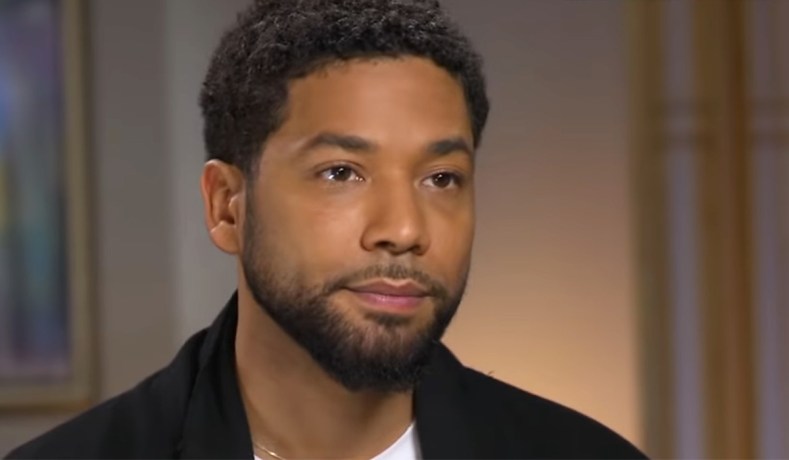 Yesterday, Jussie Smollett was arrested and charged with disorderly conduct for filing a false police report about being attacked by MAGA supporters last month. The felony charge was announced by the Cook County state’s attorney’s office. He posted bond yesterday at $100,000. His phone records have been released which revealed that Smollett was responsible for orchestrating the attack. Smollett was forced to hand over his passport after posting bond. One of the attackers, actor Abimbola (Abel) Osundairo, says he was in contact with Smollett via text with a message which read:

Might need your help on the low. You around to meet up and talk face to face.

When the two met up they allegedly discussed where and how the attack should happen. Smolett also included a script for the attackers to say during the attack which read, “Empire N****,” and “this is MAGA country…” He had given the Abimola a $100 bill to buy supplies for the attack which included rope, bleach, and ski masks. Smollett paid the brothers with a check made out for $3,500 to participate. The released text messages also revealed a drug exchange of ‘Molly’ between Smollett and Abel prior to the attack.

After being bonded out, Smollett retuned to the ‘Empire’ set to apologize to his cast members and staff saying,

“I’m sorry I’ve put you all through this and not answered any calls. I wanted to say I’m sorry and, you know me, I would never do this to any of you. You are my family. I swear to God, I did not do this.

Below is the full bond proffer.

It has been breaking news after Jordyn Woods was spotted leaving the home of Tristan Thompson at 5 am after it has been reported the two were making out during the night over the Valentine’s Day weekend. Tristan is the baby daddy of Khloe Kardashian and Jordyn is the best friend of Kylie Jenner. Via Instagram, Khloe and her best friend Malika Haqq have somewhat confirmed the allegations. It was also reported that Kylie has since removed Jordyn from her Hidden Hills home.

Recently, Jordyn made her first appearance at the launch of her eyelash line Eylure.

She spoke with her audience saying,

“I just want to say thank you guys for coming out and supporting me through everything that’s going on, you know, it’s been real. And Eylure has been super real and this has been a project I’ve been working on for over nine months right now, almost a year, so I hope you guys can enjoy the lashes as much as I do and thank you for coming out.”

“Oh my gosh. Tia. This is amazing. Your breast milk is the best milk I’ve ever tried in my life. Oh my god.”