Going into this event, I wasn’t sure what to expect. Obviously, you get the goofy, gimmicky stuff (the Street Fighter IV and Resident Evil stuff pretty much being that) but it’s more about what was going to be the experience and feeling you get about a system that has mixed views going into its release at the end of March.

Nintendo is one of those companies whose rights overshadow its wrongs but even I kind of doubted things would work out with it. People doubting the high price of entry ($250 in America, £220 in Europe) and the quality of the release day catalogue (which, to their credit, has improved recently) putting people’s minds in doubt over whether this will follow the DS Lite, the DSi and even the DSi XL in being big time sellers.

If people doubt the last two, the fundamental point of the system, the 3D, cannot be doubted. It works and, in some cases, works really well. One of the better demonstrations of this was Pro Evolution Soccer 2011 3D. Done in the field view instead of the TV camera view in most football games, it is a really nice showcase to the pure scope the 3D brings, giving you a good view of the pitch as you either chase your opponent or run towards the goal to score. It doesn’t quite convince me to not stick to playing it on the home consoles and also, graphically, it kind of looks poorer then it really should, but as a showcase title, it gives justification for having 3D involved in the first place which, in the age of 3D movies and large screen 3D versions of games, isn’t an easy thing to do.

Like I said, it's not the best looking game on occasions for the 3DS but it's a good showcase for the tech and isn't too bad as a football game.

Super Street Fighter IV 3D was there and, honestly, it was quite incredible how easier it was to play then the console version which is something I didn’t think I’d be saying. It pretty much works exactly the same way as the console version does except where the touch screen is, there are four buttons for performing special moves depending on how much offence you get in. For me, having the console version and not being that good at fighting games, it makes things easier to get into. Yeah, for the hardcore, it feels more cheap and you’re better off playing the 360/PS3 version with all the bells and whistles that includes but with all the StreetPass features, allowing data to be transfered from one 3DS to another without the need for putting them next to each other, and the potential to quickly connect from one system to another to fight with, this is actually a viable handheld version of an already great fighting game. Whodafunkit? 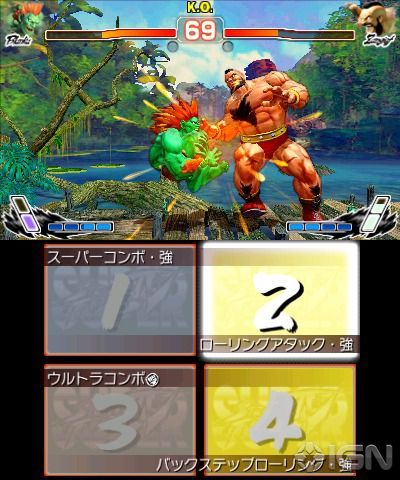 It was a real surprise how good this game actually felt. If and when I get my 3DS, This will literally be the first game I get with it.

The two big stand outs, for me, were two games that really demonstrated the hardware potential of the system in terms of motion tracks and scope. AR Games, standing for Augmented Reality, is pretty much a glorified tech demo but it’s a tech demo that puts over this. The 3DS outer camera scans a card placed on a surface in front of you and then the next thing you know, it springs into life giving you targets to shoot at that move the surface around and give you many little touches to do. What makes this even more cool is that, when you move the system around the area (and obviously not doing anything crazy with it), it follows it around as though you’re looking at it from that perspective. This especially helps when you’re fighting a dragon and need to shoot every bit of his body, who also follows you around when you move with the 3DS. It was quite the showpiece and like PES 2011, a damn good showcase to the deep potential of the technology which goes beyond just ‘great looking 3D’.

The 3DS will come with 6 of these cards, allowing you to play different targeting games including the one played at the event that climaxed with the dragon battle.

The other game is the much talked about 3DS installed software ‘Face Raiders’ (the game known as Face Ace back at E3) where you take a picture of yourself or someone else you know and then, well, chase their face around and shoot it. This, again, is a great showcase of motion tracking because, as demonstrated by people at the show, you’ll be moving the 3DS all over the area to find the targets to shoot at. If you get it right, it’ll capture your face and transform it into some kind of evil floating head Ming the Merciless, sticking it in a helmet and shooting it around. It’s not exactly the most perfect measurer of accurate face scoping (got measured as a young adult in one game and a baby in another…huh?!) but it was a tonne of fun and will probably be scarier when you get all your friends and family on there and shoot them a lot.

I will say, though, that despite this some of the 3D doesn’t feel right. Steel Diver is one of those games. I didn’t really play enough of it to really get it, but the basic idea is that you drive a submarine using the touch screen around various areas and shoot missiles and whatnot. Nothing really stuck out about it, especially in terms of scope and view since it’s in essance, a 2D sea shooter with weird controls and not much going on unless you play a really hard mission. Basically, it felt bland.

It's not that Steel Driver is a bad game, it's just really not that exciting. It's realistic, which is fine and really cool in a way but as a 3DS title...doesn't work that well.

The other game I wasn’t too keen on was Kid Icarus, actually. It wasn’t so much that it was bad, it’s a very pretty little game, it just felt like a rail shooter in the style of something like Panzer Dragoon that expected too much from people. You move the stick to move Kid around and you move the dual control to move the target to the enemy you want to hit during the flying scenes. This is never explained at any point so you’re wondering what you’re doing wrong and why it never feels quite as right as it should. It’s a shame, since it was one of Nintendo’s big showcase titles and one that the staff at the show instantly tried to get me onto.

I only wish that the title was better then it was. It's also a shame it isn't a launch title as, besides Pilotwings Resort and Nintendogs + Cats, there isn't a big franchise for Nintendo to push to showcase the 3DS' capabilities.

Besides that, the rest of the launch titles varied to degrees and some of them are worth checking out (Pilotwings Resort, Ridge Racer, even Nintendogs + Cats) and some are…well, not that different to their console counterparts (Splinter Cell, Lego Star Wars III) and not being able to at least test out the Ocarina of Time remake is something I’m kicking myself for not doing. At the same time, though, that isn’t why you should be picking up a 3DS. Nintendo have, on tech alone, created something very special in terms of a handheld competitor. The price point may not be the best for everyone and some of the games may not capitalise on this as much as others have done, but to say that they merely tried to jump on the James Cameron fronted 3D bandwagon would be exceedingly unfair. If more companies, including Nintendo, capitalized on even the motion sensors and the StreetPass and SpotPass features, Nintendo could have another huge handheld hit on their hands to once again blow Sony out of the water.

The Nintendo 3DS is out on March 25th. The best offers seen for it have been £197 over at Amazon and Tesco.com.

One Word or Less Comic Reviews for September...

One Word or Less Comic Reviews for April...

X-Box Series X: What we know