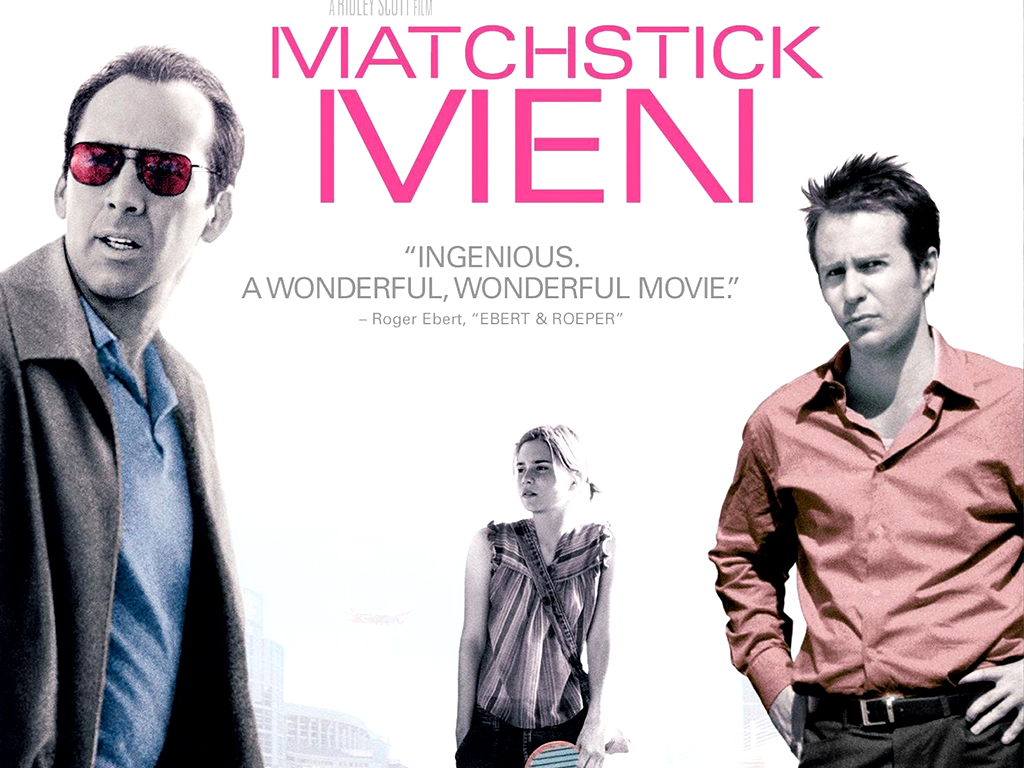 Usually, I don’t really fixate on the actors of a movie. If all of the other moving parts come together and the acting is decent at least, I can enjoy the film, and being generally terrible with names it can be hard to remember who they are beyond a couple of popular characters they played. Other than Tommy Wiseau, whose antics I’m tempted to revisit at a later date with the advent of his return in Best F(r)iends, the only exception I can think of is Nicolas Kim Coppola, known professionally as Nicolas Cage. I can fairly reliably count on enjoying his acting even if the movie itself isn’t great (The Wicker Man, Drive Angry, etc.), so after browsing on Netflix through a few movies with him that I haven’t seen yet I settled on Matchstick Men, directed by Ridley Scott.

This crime film focuses on Cage and Sam Rockwell as a pair of con artists, Roy and Frank respectively, operating a fake lottery by selling water filters, although Roy suffers from severe OCD, panic attacks, and verbal and facial tics that he keeps suppressed with illegal medication. Roy suddenly learns that he has a 14 year old daughter living with his ex-wife, which leads him to agree to Frank’s proposal of a long-term con that he had always refused. What follows is a strange mix of a crime film plot and the story an emotionally broken man trying to put the pieces of his life back together to reconnect with his long-lost daughter.

As weird as it feels to say, Matchstick Men has what can be considered one of Nicolas Cage’s more subdued roles; by that, I mean that he only has one hilariously over the top freak-out in the whole movie. When I learned a short way into the movie about Roy’s conditions, I braced myself for the worst, but Cage surprisingly veers mostly away from portraying Roy as a raving lunatic and instead gives an excellent performance of a man who has some ethical, emotional, and mental problems, but is still very human. Some of his character’s quirks are of course used for comedic purposes, and the movie and Cage do succeed in being genuinely funny when they’re trying to be, but I was pleasantly surprised at some of Roy’s more serious moments and the way he grows as a character all the way until the very end. Alison Lohman, who plays Roy’s daughter Angela, and Rockwell are also great, but Cage’s acting stood out due in part to both his starring role and the contrast to his acting in other movies.

As for the movie itself, I really liked how some visual elements correlated to Roy’s mental state. Dark interiors dimly lit by what little of the almost blinding outside light is let in highlights Roy’s fear of outside places, and the distortion of both time and vision during his panic attacks was interesting as well. Netflix lists this movie as both a comedy and a drama, and while in my opinion the ratio was distinctly weighted in the favor of drama, as I mentioned before the comedy portions are solid. Plot-wise the film somehow manages to stay interesting in the parts focused on the cons, the scenes about Roy growing closer to his daughter, and the times when the two intermingle. It also ends with a twist that, while not overly obvious beyond some callbacks to certain lines after it’s revealed, has enough little clues and tidbits hidden throughout the film so that the viewer could figure it out before the end. That person would be admittedly smarter than me, but even without realizing it before it was revealed, the twist was entertaining and the bittersweet ending left me satisfied.

Its generally positive reviews despite its lack of box office success meant that, for the most part, critics were left satisfied as well. Matchstick Men holds a respectable 83% positive rating on Rotten Tomatoes and a four out of four stars from Roger Ebert, although some critics were dissatisfied with Cage’s acting, the deviations from the original novel by Eric Garcia, or both. Although I’m a sucker for almost any movie with Nicolas Cage in it, I firmly believe that Matchstick Men would merit being called a great film even without his unique acting talents, which is a lot more than I can say for some of the other movies he has appeared in. So, if you’re looking to enjoy some good old fashioned “Cage rage” crime drama, it admittedly can be found in about 80% of his movies that are on Netflix right now, but I can vouch for this one in particular.