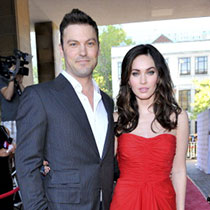 (Yahoo!) – Megan Fox has said she wants to have more children – and she’s on her way!

Less than a year after welcoming son Noah, the 27-year-old actress has announced that she’s expecting her second child with husband Brian Austin Green, 40.

“I can confirm Megan is expecting her second child with her husband Brian,” a spokesperson for the actress, who has been filming the “Teenage Mutant Ninja Turtles” movie in Manhattan, confirmed to the New York Post’s Page Six.

Since Noah was born last September, Fox – who is also stepmother to Green’s 11-year-old Kassius, hasn’t been shy about her plans to expand her family.

“All I wanted to do my whole, whole life was have a baby and, now, I’ve finally done it,” she told the U.K. edition of Marie Claire in January. “I just want to give Noah as much of myself as I can. And I want to have more kids. That is where my heart is.”

And she didn’t want to wait. Around that time she hinted they were ready for number two.

“I’m so tired, I don’t know if my body could do it right now, but if it happens, it happens,” she told Extra, adding, “[Brian] wants a little a girl.”

The proud dad, who was with her during the interview, chimed in, saying, “That’s what I want, a little girl, I have two boys.”

The celebrity parents have been masterful when it comes to keeping little Noah out of the spotlight. He has rarely been seen, but Fox says he’s the spitting image of his dad.

“He looks I would say 70 percent like Brian,” she said on the “Ellen DeGeneres Show.” “He was his identical twin when he came out and recently he’s been getting chubbier and everyone’s like oh, he’s so chubby now he looks like you and I don’t know how I should take that.”