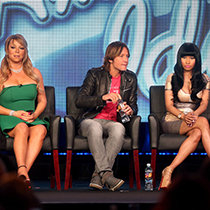 (Yahoo!) – Keith Urban was in Nashville over the weekend for Yahoo’s Ram Country Live concert, but before he hit the stage, “omg! Insider” contributor Kristen Aldridge got the chance to ask him about his new album Fuse, and what it was like sitting between Nicki Minaj and Mariah Carey on “American Idol” season 12.

“I’ve played in so many different bands and it was like being in a band,” middle man Urban revealed. “Everyone’s got their thing. But the whole point of it is to have different personalities, and we had colorful personalities. I enjoyed it.”

While Mariah and Nicki won’t be back at the judges table this season, Jennifer Lopez’s return is something that Keith is pretty excited about. “I love that Jen’s come back. It’s really nice to have her in the center.”

Check out this video to see what the country crooner has to say about Harry Connick Jr. and the chemistry of the new “Idol” judging panel, and for more on the latest in entertainment news, tune in to “omg! Insider” on television tonight!