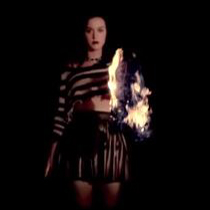 Katy Perry may be leaving her “Teenage Dream” days behind her.

In a new video posted to her YouTube channel, the singer is shown dramatically lighting fire to the signature bright blue wig she became known for during the 2010 album’s extensive tour.

The video is named “Burning Baby Blue,” is being seen as Katy’s signal to fans that she won’t be taking the bubblegum pop route on her upcoming album Prism, out in October.

The video also confirms that her new single will be called “Roar,” as previously rumored.  It follows similar hints dropped by her longtime songwriting collaborator Bonnie McKee, who told “MTV” last month that the new album will sound “more grown up” and “mature.”