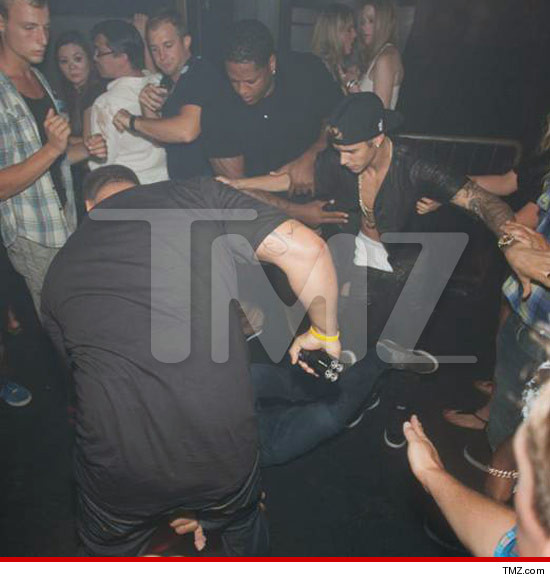 Justin Bieber got in quite the predicament Friday night when the singer was attacked by a partier at a Toronto nightclub, TMZ reports.

The scuffle — caught on camera — happened at 3 a.m. whenthe 19-year-old entertainer left his VIP section to interact with other people in the room. A male charged at the “As Long As You Love Me” singer and security immediately rushed in to the manage the situation. The attacker was kicked out of the club and the police were not called.

In photos released, the “Boyfriend” star is seen wearing an unbuttoned black top while sporting a backward black hat at the club. He also wore several gold chains around his neck. During the brawl, Bieber was seen being held back by security, but later helped to push others aside once the attacker was shoved to the floor.

Hours before the incident, the Canadian native shared a recent photo of himself sitting in front of the public steps he used to sing at in Stratford, Ontario, Canada at a young age. “Remember where you come from,”he wrote via Instagram. The area where he used to play for onlookers — before getting discovered by American talent manager Scooter Braun in 2008 — now has a gold star plaque dedicated to the megastar.