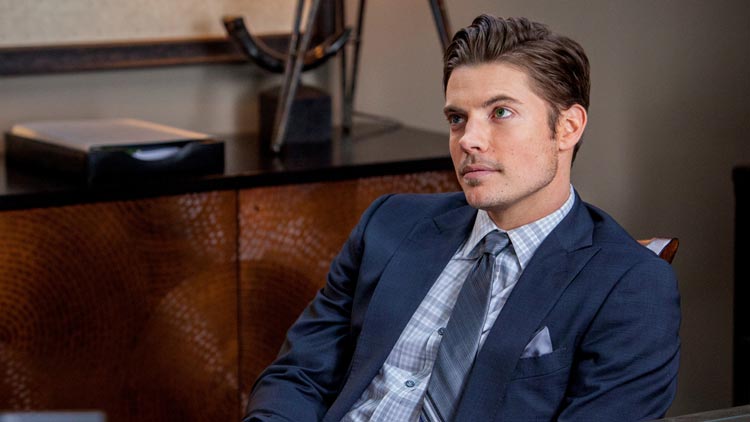 “The Arrangement” is a mysterious and complicated Hollywood love story that goes beyond the glamour and lights of the red carpet for a look at the cost of stardom. The show follows Megan Morrison (Evangelista), a beautiful young actress who auditions for the female lead in a summer blockbuster playing opposite Kyle West (Henderson), one of the world’s top movie stars. After Megan’s amazing audition leads to an incredible first date (and more) with Kyle, her Cinderella story takes an unexpected turn when she is presented with a contract that would change her life forever and secure her fame. However, it raises the question: is their relationship about love or about the contract? And while Megan has a mysterious past she is trying to keep hidden, Kyle seems to be hiding his own big secret as well.

Kyle’s mentor Terence Anderson (Vartan), who runs a self-help organization called the Institute of The Higher Mind and is married to Kyle’s producing partner Deann (Doig), is the creator of this contract that is designed to “protect” Kyle. But are his own motives much more sinister? In a town where fame means everything, Megan must decide how far she’s willing to go to launch her career and whether or not she will accept “The Arrangement.”

“The Arrangement” is the second scripted project from E!, following the highly-successful first two seasons of “The Royals,” which is currently in production on season three in London. “The Royals” has contributed to E!’s ongoing growth and success, which includes a year on year primetime increase of +10% among A18-49 in first quarter 2016.

About E! Entertainment:
E! is the only global, multiplatform brand for all things pop culture. The network is currently available to 91 million cable and satellite subscribers in the U.S. “E! News” airs nightly on the network and delivers breaking entertainment news and pop culture coverage 24/7 across all digital and social platforms. E! programming includes popular series “Keeping Up with the Kardashians,” “Total Divas,” “#RichKids of Beverly Hills,” “Botched,” “I Am Cait,” “Hollywood Medium with Tyler Henry,” “WAGS,” and “Fashion Police,” as well as the network’s first original scripted series “The Royals.” Additionally, E!’s “Live from the Red Carpet” signature events keep fans connected to their favorite stars on pop culture’s biggest nights. E! is a network of NBCUniversal Cable Entertainment, a division of NBCUniversal, one of the world’s leading media and entertainment companies in the development, production, and marketing of entertainment, news and information to a global audience. For more corporate information, visit www.nbcuniversal.com.

About Universal Cable Productions:
Universal Cable Productions (UCP) creates innovative and critically acclaimed original scripted and digital content across media platforms for domestic and international distribution. In the U.S., UCP’s programming can be seen across various networks including the Golden Globe and Peabody award-winning drama “Mr. Robot,” “Colony,” “Playing House,” “Royal Pains” and “Suits” on USA Network; “The Magicians,” “12 Monkeys,” and “Killjoys” on Syfy; “Girlfriends’ Guide To Divorce” on Bravo; “The Royals,” on E!; and “Difficult People,” on Hulu. UCP’s content library includes critic and fan favorites such as the Emmy-award winning “Monk” as well as “Psych” and “Battlestar Galactica.” Universal Cable Productions is a part of NBCUniversal Cable Entertainment, a division of NBCUniversal, one of the world’s leading media and entertainment companies. Follow us @UCPisTV