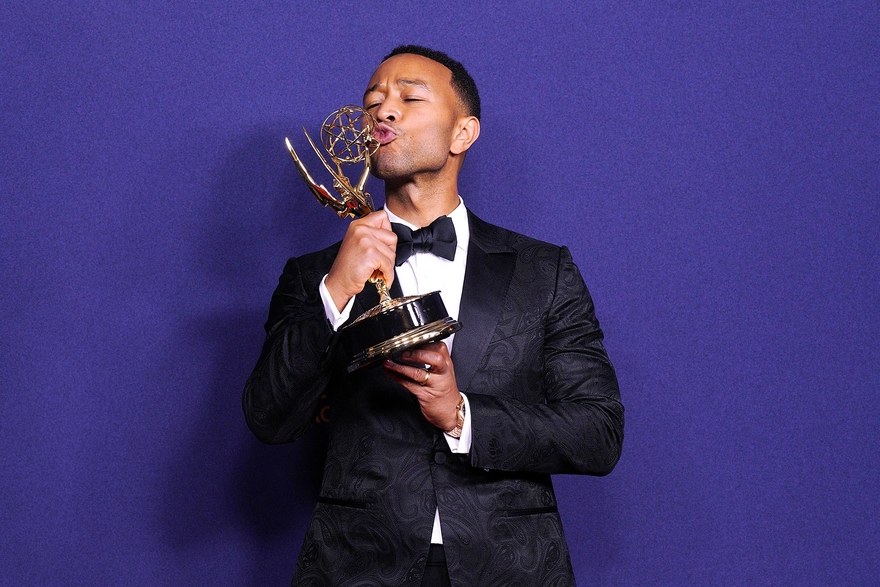 UNIVERSAL CITY, Calif. – Sept. 13, 2018 – John Legend, who this past weekend earned coveted EGOT status after winning an Emmy Award as a producer for “Jesus Christ Superstar Live in Concert,” will serve as a coach on the upcoming spring cycle of NBC’s four-time Emmy-winning musical competition series “The Voice.” Legend will be joined by returning music superstar coaches Kelly Clarkson, Adam Levine and Blake Shelton, and host Carson Daly.

“John Legend is a one-of-a-kind musician and producer with remarkable skills that are beyond measure,” said Paul Telegdy, President, Alternative and Reality Group, NBC Entertainment. “His multi-dimensional career and incredible talents provide a repertoire that will excite and inspire our artists. This coaching panel is sure to ignite season 16.”

“I’m thrilled to join the coaches of ‘The Voice.’ I’ve been a guest and mentor on the show multiple times and I’m so excited to discover talented singers and help them make the most of their gift. I hope the world is ready for #TeamJL,” Legend said.

A highly accomplished musician, songwriter, actor, film producer and philanthropist, Legend is one of the most versatile and talented artists in entertainment today.

Legend won an Oscar in 2015 for his original song “Glory” (co-written by Common) from the movie “Selma”; won a Tony Award in 2017 as producer of August Wilson’s “Jitney,” which won for Best Revival of a Play; and has won 10 Grammy Awards. Legend has released five studio albums and began his impressive Grammy run in 2006 when he won Best New Artist for his debut release “Get Lifted,” which captured Best R&B Album. “Get Lifted,” along with each of his next three albums – “Once Again,” “Evolver” and “Love in the Future” – reached the Top 5 in album sales on the Billboard charts and achieved gold status.

As a film producer, Legend worked on the 2016 film sensation “La La Land,” in which he also appeared. In addition, Legend has acted in several TV and film productions, including “Underground,” “Curb Your Enthusiasm” and “Soul Men.”

“The Voice” ruled last season as television’s #1 alternative series in both adults 18-49 and total viewers, with the show’s Monday edition winning its timeslot among the broadcast networks in every key ratings measure. “The Voice’s” successful season culminated when its May 22 finale led NBC to the nightlong win.

EGOT-winning, critically acclaimed, multi-platinum singer songwriter John Legend has garnered 10 Grammy Awards, an Academy Award, a Golden Globe, a Tony Award, and an Emmy Award among others. In 2016, Legend released his fifth studio album “DARKNESS AND LIGHT,” to rave reviews and toured to sold out audiences across the globe. He serves as one of the principles for Get Lifted Film Co., a film and television production company based in Los Angeles. Get Lifted Film Co. served as executive producers on NBC’s live production of “Jesus Christ Superstar Live in Concert,” the HBO documentary “Southern Rites,” 2018 Tribeca Audience Award Winner Documentary “United Skates,” WGN America’s series “Underground,” and films such as “Southside With You” and “La La Land.” In 2015, Legend initiated the #FREEAMERICA campaign; a campaign designed to change the national conversation of our country’s misguided criminal justice policies and to end mass incarceration. In April 2018, Legend released a new track “A Good Night” featuring Blood Pop and starred as Jesus Christ in NBC’s “Jesus Christ Superstar Live in Concert.” He was nominated for an Emmy Award this year for Outstanding Lead Actor in a Limited Series Or Movie and just won an Emmy as a producer in the category of Outstanding Variety Special (Live) for “Jesus Christ Superstar Live in Concert.”