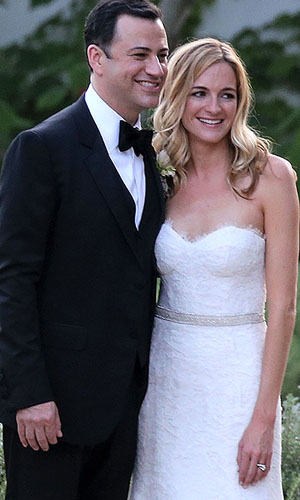 Though the newlyweds could have gotten some pretty nice wedding presents out of that crew, the couple requested that their guests make a charitable donation in lieu of gifts.

On Friday evening, Kimmel and his bride-to-bewere spotted (both wearing white) as they welcomed friends and family to the Ojai Valley Inn & Spa, where they kicked off their rehearsal dinner.

The funnyman began dating McNearney — who is co-head writer on “Jimmy Kimmel Live!” — in 2009. Kimmel popped the question in August 2012 while the couple was vacationing in South Africa’s Kruger National Park.

In early June, Kimmel had a bachelor party in Vancouver, Canada, with 12 pals, including his former “Man Show” co-host Adam Carolla and comedian Jeff Ross. But it wasn’t your typical blowout bash. Surprisingly, the guys opted for a two-hour bike ride around the city followed by dinner.

This is the first marriage for McNearney, and the second for Kimmel, who was previously wed to Gina Kimmel from 1988-2002. They have two children together, Katie and Kevin. Following his divorce, Kimmel went on to have an on-off relationship with comedian Sarah Silverman for nearly seven years before they split for good in 2009.