Jerry Brown’s Rejection of More Wildfire Legislation- Could It Have Saved Lives? 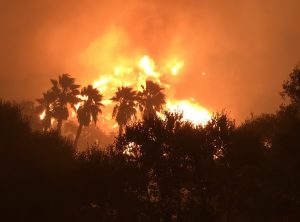 Flames burning into the palm trees on the coast of Santa Barbara during California’s Thomas Fire in December 2017 (Greg Birchfield, CalFire).

Due to the wildfires burning in California for the past week, many are asking: Was there something the state government could have done to prevent these disasters?

One possible solution was rejected by the state’s governor a couple years ago. Senate Bill 1463, introduced by California State Senator John Moorlach of Costa Mesa, was vetoed by Governor Jerry Brown in September 2016. 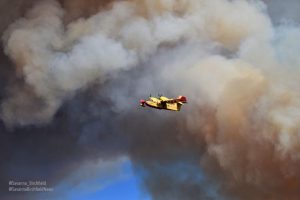 California has had 7,579 fires during 2018, the most destructive number on record for the state (Savanna Birchfield, MultiMediaMouth).

This bill would authorize the Public Utilities Commission to establish rules for public utilities- like Pacific Gas and Electric (PG&E) and Edison- to reduce fire hazard in brush and wooded areas near power lines. This means they would have to “maintain a clearance in all directions between all vegetation and all conductors that are carrying electric current”, according to the bill’s text at the California Legislative Information website.

With the knowledge that the Thomas Fire, which burned through Ventura County and Santa Barbara County, being started by Edison power lines and PG&E currently being blamed for the Camp Fire that destroyed the town of Paradise in Northern California, many people are blaming this veto for the 80 deaths and almost one thousand people unaccounted for. 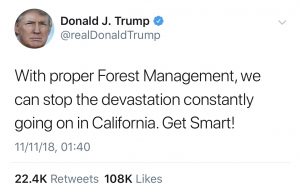 President Trump again tweeted about his unhappiness with the forest management on November 11 (@realDonaldTrump, Twitter).

In Brown’s veto letter, he says the bill is redundant with the Commission already “doing just that through the existing proceeding on fire-threat maps and fire-safety regulations”.

To further the discontent of the public, Brown recently passed Senate Bill 901, which reverses previous laws that “prohibit an electrical corporation or gas corporation… from recovering from ratepayers expenses”.

Critics, including President Donald Trump, condemn the “gross mismanagement of the forests” in California, which the president stated in a tweet November 10.

With many so unhappy about the governor’s decisions in relation to fire prevention, Californians are waiting to see what his next move will be before his term ends in January.

Troops Being Sent to Meet the Caravan Coming...

On this Memorial Day, we remember why we...

Trump authorized the air strike in Baghdad that...

FBI’s Russia inquiry launch was justified, but the...