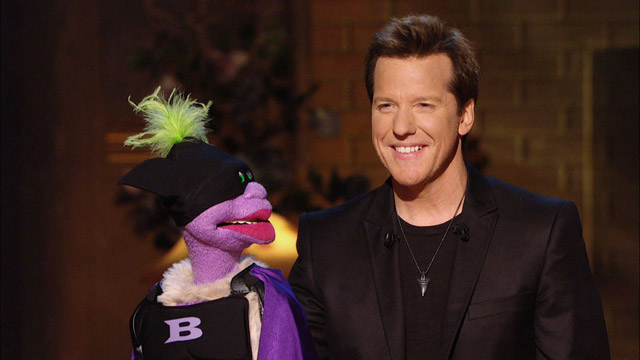 Hourlong Primetime Special Will Be Taped Aug. 19 at the Dolby Theatre and Include a Performance from Country Superstar and Multi-Grammy Award Winner Brad Paisley

UNIVERSAL CITY, Calif. – July 9 , 2015 – Jeff Dunham, the wildly popular and internationally acclaimed comedian and ventriloquist, is coming to NBC to star in his own special, “Jeff Dunham: Unhinged in Hollywood,” set for Thursday Sept. 17 (8-9 p.m. ET).

Jeff Dunham: Unhinged in Hollywood” will tape Aug. 19 at the world famous Dolby Theater in Hollywood, home of the Academy Awards. The special will include a live performance by country music superstar Brad Paisley as well as guest appearances by comedian-actor Chris Parnell and mixed martial artist fighter and former UFC champion Chuck Liddell.

The special will also include never before seen stand-up and behind-the-scenes sketches featuring Dunham and his eccentric beloved characters.

“NBC has been very good to me over the years,” said Dunham, “and it’s a true honor to have a special on the network. Walter, (Dunham’s curmudgeonly old man character) said he’s looking forward to performing again in the showbiz/divorce capital of the world.”

The special will be also be available to own on Blu-ray and DVD later in the year and will include additional stand-up footage from Dunham’s stage performance. It will mark Dunham’s first full-length stand-up performance to be released on DVD in more than three years.

Dunham has carved out one of the most unique and successful spaces in comedy. Besides recently extending his residency of “Jeff Dunham: Not Playing with a Full Deck” at Las Vegas’ Planet Hollywood Resort & Casino, the comic is also a regular on Forbes’ Celebrity 100 list of most powerful entertainers. He has used his ability to create unforgettable characters, such as the cranky and elderly Walter, as well as the sometimes-banned Achmed the Dead Terrorist, to become one of the world’s top-grossing comedians. His massive following has registered record-breaking television ratings, more than 7 million DVDs sold, more than 1 billion YouTube views, and arena-sized live shows on five continents ¬– from Reykjavik to Johannesburg to Abu Dhabi.