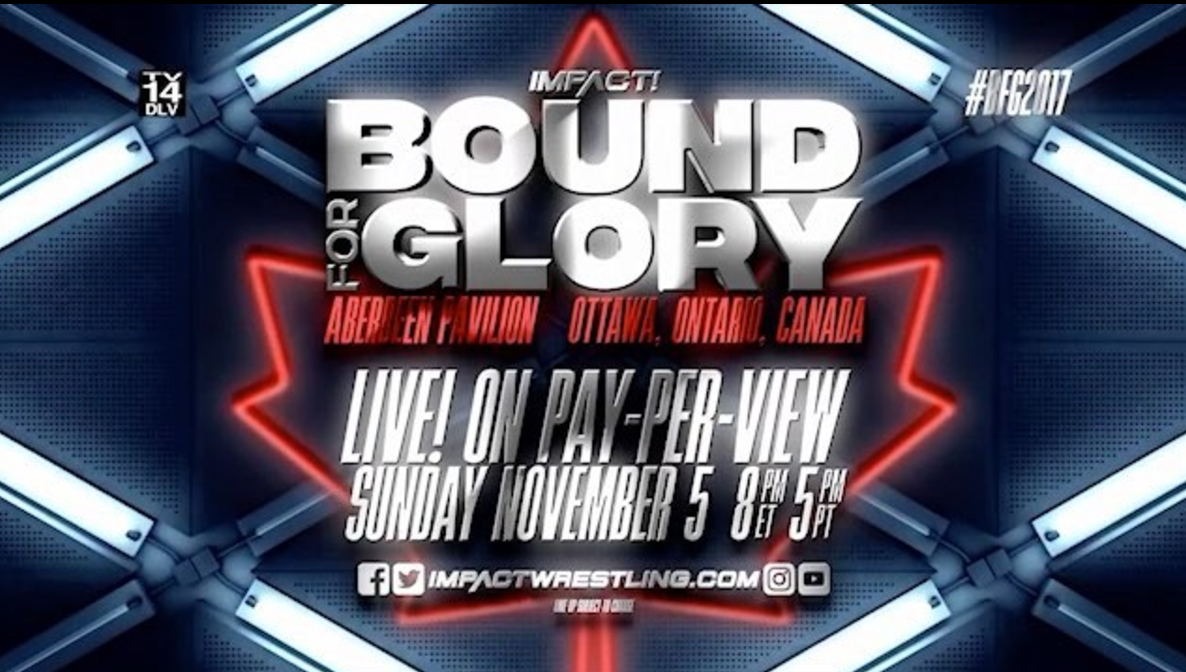 IMPACT Wrestling, a subsidiary of Anthem Sports & Entertainment Corp., announced today that Bound for Glory, its premier annual pay-per-view event, will be broadcast from the historic Aberdeen Pavilion in Ottawa, Ontario, Canada on Sunday, November 5, 2017.

The Aberdeen Pavilion will also play host to five days of IMPACT television tapings from Nov. 6 to Nov. 10. Ticket on-sale information for Bound for Glory and IMPACT will be revealed in the coming weeks.

“We are ecstatic and honored to bring our blockbuster event Bound for Glory to a Canadian venue rooted in cultural heritage and tradition,” said Ed Nordholm, president of IMPACT Wrestling. “Our loyal Canadian viewers on Fight Network and GameTV have been vocal supporters of IMPACT Wrestling over the years and we thought the nation’s capital would be a fitting place to stage our biggest event of the year. Canadian professional wrestling crowds have a reputation for their energy and enthusiasm, so we are excited to bring them an unforgettable night of action.”

Bound for Glory will feature World Champion Eli Drake, former champion Alberto el Patron and Johnny Impact, the holder of the Mega, Latin American and World Cruiserweight championship belts in Lucha Libre AAA, who will be making his inaugural Bound for Glory appearance. Bobby Lashley has unfinished business; will he return and will his cohorts from American Top Team, led by owner Dan Lambert, continue to meddle with his career? The Knockouts will collide as Hall of Famer Gail Kim works through her final year in professional wrestling, and the stars of the X-Division will bring their high-flying brand of athletics to the ring. International talent for the event will include El Hijo del Fantasma, Pagano and El Texano Jr. from Lucha Libre AAA.

Located in Lansdowne Park, the historic fairgrounds of Canada’s national capital, the 33,000-square foot Aberdeen Pavilion is an Ottawa landmark, which has been home to many significant events throughout the city’s history, including Stanley Cup challenge matches in 1904. Built in 1898 and inspired by London’s Crystal Palace, the venue was designated a national historic site of Canada because it is the only large-scale exhibition building in Canada surviving from the 19th century.

Showcasing some of the biggest stars in professional wrestling, IMPACT airs on Thursdays at 8:00 p.m. ET/PT on Pop in the U.S., as well as Fight Network and GameTV across Canada.