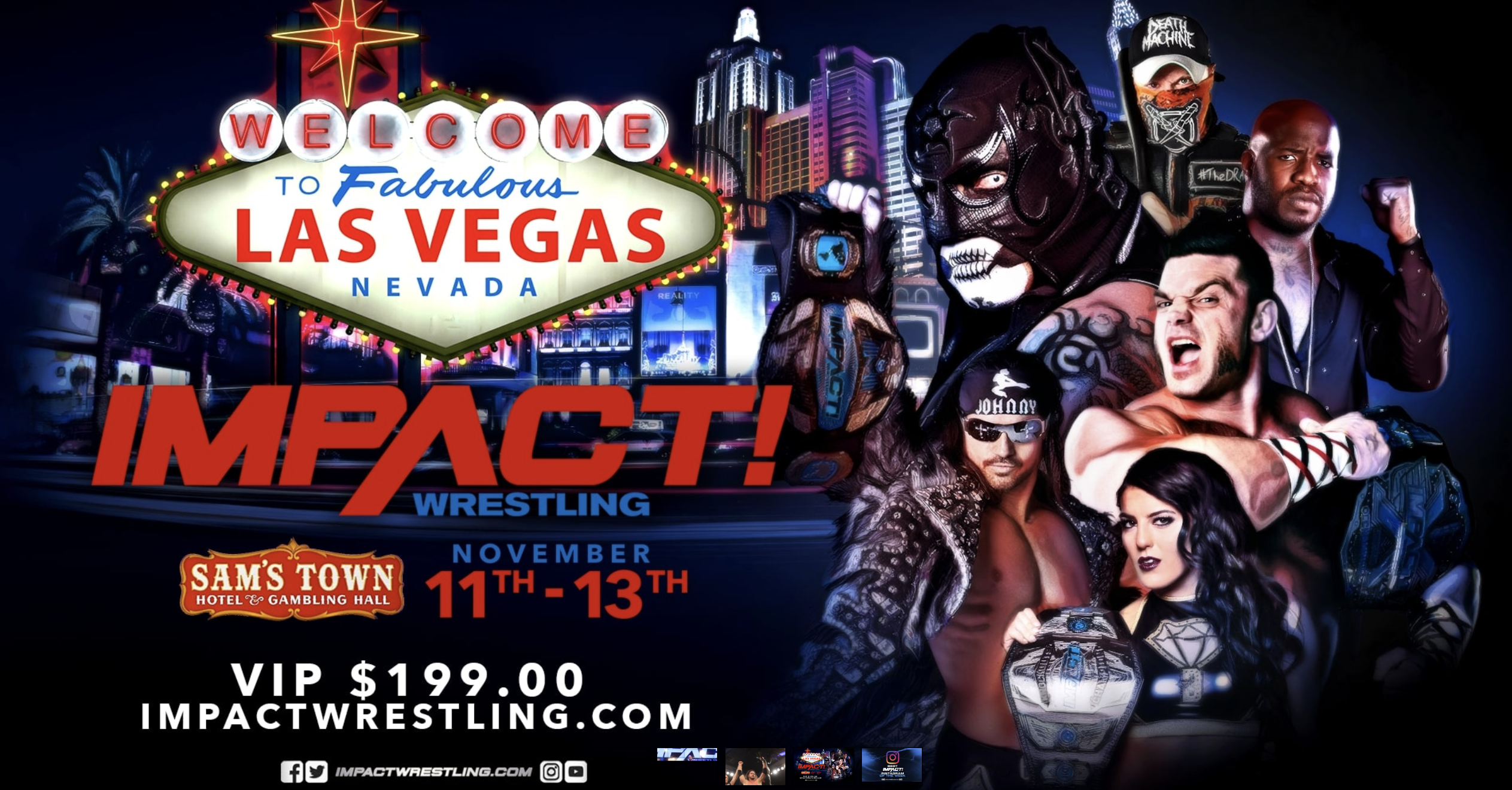 I arrived pretty early to the Impact Wrestling taping in Las Vegas at Sam’s Town Live. There was a line out the into the casino floor to get into the venue. One of the things I looked for going into the venue was for any promotional material for the show. I didn’t see any. For other shows from ROH and Paragon Pro, there were signs and digital advertising for the event. I didn’t see any. They have their nice new stage that they debut at Redemption. I’ve been to sams a few times for Wrestling, Impact’s set up is probably the best I’ve seen. The Pillars of Destiny (Hunter & Jackson?) vs. The One Percent (Joerel Nelson & Royce Isaacs). The Pillars of Destiny win with an impressive slam off the second rope and then a diving head put off from another turn buckle. Both teams have really good looks. It’s time for Impact to start. IMPACT Wrestling tapings began. There were about 5-7 minutes of downtime where the crowd then chanted “Awkward silence” and Josh Mathews approved. Match One:  Fallah Bahh and KM vs. LAX with Konan. Fallah in the match first with Santana. Ortiz, from the apron, yells at Santana to knock Fallah off his feet. Pretty funny moment. LAX attempts to do a double suplex on KM but KM reverses it. LAX takes the win. LAX was super over with the Vegas crowd. The ring announcers comes out and announce that the next match will be the opener for one of their show. So they are going to tape out of sequence, Match Two: Ray Lyn vs. Impact Wrestling Women’s Champion Tessa Blanchard. Ray Lyn has a very impressive series of kicks. Blanchard stops her and takes control of the match. Blanchard presses Lyn above her head and drops her into a knee to the face. Blanchard does a cutter move. Lyn is able to regain control of the match and does a running knee into the corner. Hurricanronna. The crowd is really into Blanchard. Winner: Knockout’s Champion Tessa Blanchard After the match, Blanchard grabs the microphone and calls out Taya Valkyrie. Blanchard says that she’s been called every name in the book and Taya has made too many excuses. She said Taya’s nots the champion because she is. Blanchard asks how it feels to be nothing more than Johnny Impacts Wife. The crowd ate that up. Cue Taya’s music. She runs to the ring and Blanchard bails. Taya says that Tessa’s running. She said she is Johnny’s wife and proud of it, She says shes also the “Weda Loca”, and the Queen of Lucha Libre. Match is set: Taya Valkyrie vs.Tessa Blanchard in Nashville. Up next: Matt Sydal vs. Impact Wrestling World Champion, Johnny Impact. Impact is super over. Impact is in control of the match from the start. Impact throws Sydal into the corner and runs after him, but is kicked out of the rin by Sydal. First pin attempt is by Sydal with a two count. Impact attempts a Starship Pain but Page pulls Sydal out fo the ring. The two brawl outside the ring for a second. Sydal throws Impact into the ring. Superkick. Sydal goes tot he top rope but Impact stops him. Impact hits the Starship Pain and wins the match. After the match, Killer Kross comes out to the ring. Great reception from the crowd. Killer Kross starts with a very deep voice saying “Hello John”. Kross is super over. Kross says when he started in the business, he wanted to be the catalyst for change. Kross says that he lost to IMPACT fair and square as the crowd chants “one more time”. Kross says that maybe he isn’t the catalyst of change and maybe Impact is. Sounds like Kross is getting ready to offer an alliance of sorts to Impact. Looks like Impact is going to shake Kross’ hand, but instead, he grabs the microphone. Impact says that the crowd doesn’t know Kross as Impact does. He said straight up that Impact doesn’t trust Kross. Eli Drake is out to cut a promo. The crowd begins to chant “ELI. DRAKE” and then “SUCKS!”. Eli responds by saying “I didn’t ask any of you, dummies”. Drake then says he’s the last of a dying breed. Drake says that he ended Abyss’ career. Drake says that companies can’t sell out buildings and ratings tanking (after Impact gets record low ratings). As Drake is saying he will kill the gimmicks in wrestling, Tommy Dreamer comes out to the ring. Dreamer says that its skinny jean wearing millennials who forgot what wrestling is. Says “Hardcore is a lifestyle”. Dreamer says the most “Hardcore” people are the fans”. Dreamer and Drake tease a fight but Drake runs. Heather Monroe vs. Su Yung. Su Yung wins by submission. I missed the angle that happened next. Rich Swan & Willie Mack vs. Lucha Brothers. Willie Mack has an impressive standing hurricanronna. Lucha Brothers win the match. LAX comes out after the match. They show respect to each other. Ortiz grabs the microphone and says the match was legit. LAX says that they are looking for their next challengers. They said that they’ve been all over the world defending and retaining theit titles. LAX says that they want to give their “Familia” a chance for the titles. LAX challenges the Lucha Brothers for a title match at Homecoming on January 6 from Nashville. Off camera: the ring announcer comes out and tries to get the crowd pumped. He tries to do a “YES” chant and gets booed out of the arena.    Knockouts action. Katarina vs. Jordynne Grace. Grace wins by submission. This was an incredible match. Some filler matches I missed going to the restroom. X Division Championship Brian Cage vs. Sammi Callihan. Cage wins.
JOIN NOW!