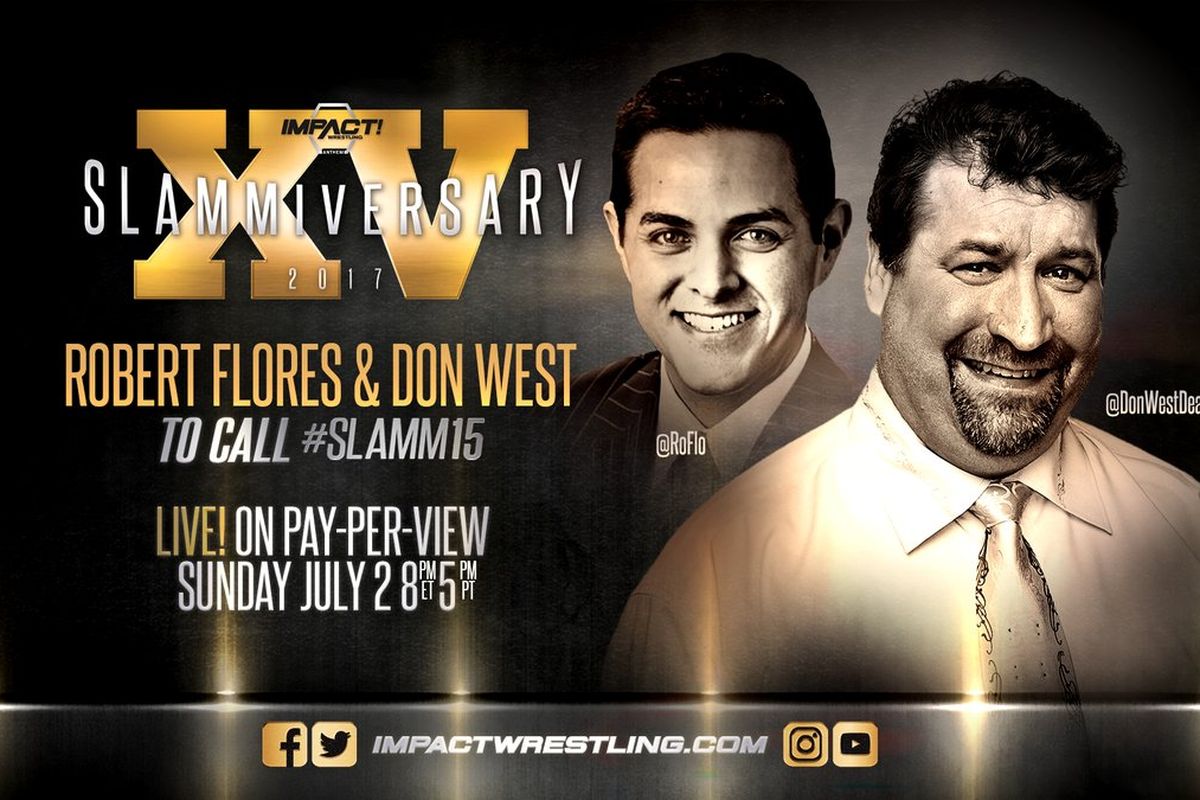 NASHVILLE (June 13, 2017) — IMPACT Wrestling is dipping into the high-profile sports world for a little broadcasting help at Slammiversary 15, a pay-per-view extravaganza on July 2 in Orlando, Florida.

IMPACT has signed Robert Flores to be the lead announcer for Slammiversary, to work alongside longtime IMPACT color commentator Don West, who is making a one-night return behind the microphone.

IMPACT faced an announcing dilemma for Slammiversary as broadcasters Josh Mathews and Jeremy Borash are wrestling in a tag-team match as the animosity between the two has boiled over in recent weeks.  Borash and Joseph Park will team up against Mathews and “Big Poppa Pump” Scott Steiner, one of the most powerful and feared wrestlers of all time.

Flores joined MLB Network and NHL Network in 2016 from ESPN, where he most recently anchored SportsCenter, ABC’s college football studio updates and ESPN2’s Fantasy Football Now.  Flores joined ESPN in 2005 as an ESPNews anchor and later contributed to a variety of studio shows, including Baseball Tonight, NBA Fastbreak and Friday Night Fights.

“I’m excited to have a part in this year’s Slammiversary and grateful to Jeff Jarrett for this unique opportunity,” Flores said.

Flores said the match that he’s most excited to announce is for the X-Division Championship. “I’m a fan of high-flyers,” Flores said.

A Texas native, Flores earned his bachelor’s degree in radio and television from the University of Houston in 1992. Flores attended J. Frank Dobie High School in Houston and is a member of their JFD Hall of Fame.  His wrestling roots are engrained in his Houston childhood.

“To play a role in Slammiversary alongside Don West is really cool,” Flores said.  “Slammiversary is an event 15-years in the making, and the best always separate themselves on the biggest stages – be it the in the wrestling ring or the World Series.

“I can’t wait to see what the IMPACT Wrestling stars do on July 2nd at Slammiversary.”

Don West broke onto the broadcasting scene in the 1990s on the Shop At Home Network.  He was the popular, loud, energetic, abrasive salesman, pitching countless products on late-night television – and he even was in a parody video (portrayed by actor Will Ferrell) during a segment of Saturday Night Live.

West spent about 10 years as a color commentator for IMPACT Wrestling, dating back to the company’s first-ever event on June 19, 2002.

“I am so excited to be a part of IMPACT again and to be a part of the great Slammiversary weekend,” West said.  “As an avid sports and baseball fan, it will be a great honor to work next to Robert Flores as I have admired his professionalism for years.  When Jeff Jarrett asked me to do this, I had only one response, ‘YOU’VE GOT TO BE KIDDING ME!!!’”

“It will be great to see and hear Don West back on an IMPACT Wrestling broadcast; no one brings more energy and excitement to a broadcast than Don,” said Jeff Jarrett, the Chief Creative Officer for IMPACT Wrestling.  “Having a broadcaster on Slammiversary at the level that Robert Flores has achieved is unbelievable.  We are so excited to have RoFlo in the IMPACT family – and broadcast booth.”

IMPACT Wrestling specializes in television properties, events, products, merchandise and music, as well as the management and promotion of professional wrestlers. The roster features such greats as EC3, Bobby Lashley, Eddie Edwards, Davey Richards, James Storm, the high-flying X-Division, Gail Kim and the lovely and lethal Knockouts. Its highly successful flagship, IMPACT WRESTLING, broadcasts in more than 120 countries around the world, including Thursdays at 8 p.m. ET/PT on Pop (a joint venture of CBS Corporation and Lionsgate) in the United States, and on Fight Network and GameTV in Canada.