I is for Ill Communication: A to Z Recap 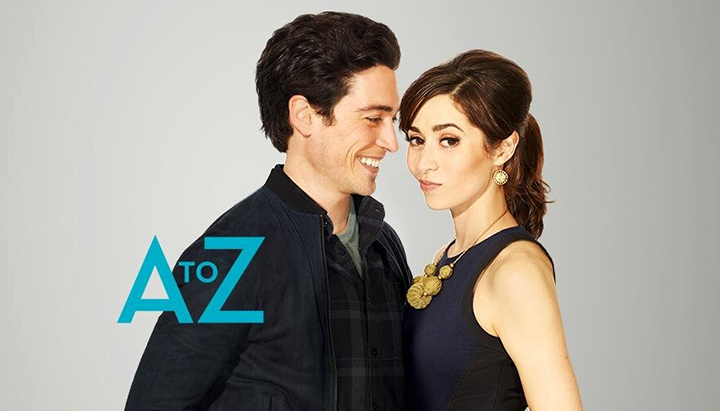 After taking a mid-season break, A to Z returns with yet another adorable episode that leaves its viewers and fans with a giddy feeling in their hearts. In I is for Ill Communication, Andrew and Zelda plan to spend the holidays together. After Andrew claims that he is an exceptionally good gift giver, the couple decides to challenge each other to see who is the better gift giver. Dragging along the others’ best friend to go shopping with them on the quest to find the perfect gift, both Andrew and Zelda confide in Steph and Stu that they actually do not want to spend Christmas with each other.

While this crisis unravels in Andrew and Zelda’s relationship, another one comes to light at Wallflower, the online dating site that Andrew and Stu work for. A customer, Irene Wallace, has been on the site for 3 years, has spend a grand total of $14K in the process, but has yet to find true love. She schedules an interview with Huffington Post to bash on Wallflower, sabotaging the company at the most inopportune moment, as most of its customers come rolling in around the holidays.

To counteract this attack, Lydia, the head of Wallflower, plots for her partner, Howard, to go on a date with Irene via a fake Wallflower account, and talk her out of doing the interview with Huffington Post. Howard complies, and returns from the date surprisingly satisfied, and even makes plans to spend the holidays with Irene. This leaves Lydia is a perplexed emotional state, as she is abandoned in the office over Christmas break, left to do the work she and Howard usually do together, alone.  Employees Dinesh and Lora suggest to her that she has feelings for Howard, and that he is her “work husband.” Though Lydia denies this profusely, nothing makes her happier than when Howard returns to the office, after a strange second date with Irene, which left him in her bedroom, alone, which smelled overwhelmingly of marina sauce. The viewers find themselves marveling at the budding romance as Lydia gives Howard a box of peppermint bark, which is his favorite Christmas treat.

Things take a turn for the worst when Zelda sees a text from Andrew on Steph’s phone that reads, “Thanks for not telling Zelda about Christmas,” and Stu blurts out Zelda’s true feelings to Andrew. Four days before Christmas, the couple get together to decorate the Christmas tree, and a fight over decorating technicalities ends up revealing the true about where they’d rather be for Christmas: not with each other. The couple furiously books last minute tickets to their respective destinations to spend the holidays with their family, and go as far as the airport without addressing their fight.

But right before they part, Andrew and Zelda both realize that they cannot leave each other without saying what they really need to. Andrew confesses that his not wanting to spend Christmas with Zelda stems from his insecurity that he likes Zelda more that she likes him, but Zelda dispels this fear when she admits that she felt the same way about him. The couple finally say the much awaited “I love you” to each other, even after dating for only 2 months. The two have proven to have the love, care, and chemistry they have for and with each other only nurture and strengthen their new romance. Though their relationship seemed to be on the rocks for a majority of the episode, its ending assured its audience that Andrew and Zelda are now stronger than ever before.

The roller coaster ride continues as we dive deeper into the 6 months, 2 hours, and 12 minute account of Andrew and Zelda’s relationship, from A to Z. Where does it all go wrong? Why is the reason behind Andrew and Zelda’s break up? There’s only one way to find out: Be sure to watch next week’s episode for another half hour of love, laughter, and the deciphering of a romantic mystery.