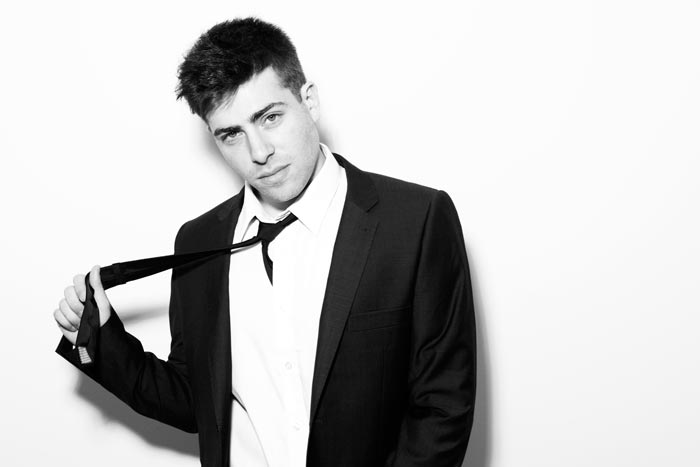 On Friday, November 28th, confused yet amused onlookers stared questioningly at the crowd of fans camped outside of The Theater at Madison Square Garden. “Hoodie Allen? At MSG?” one guy even asked me. Yes, it’s true, one of the venues of the People Keep Talking Tour was indeed held at Madison Square Garden. With opening performances from artists MAX and Chiddy Bang, the night proved to be one for the books.

Singer/songwriter MAX kicked off the night with a high energy performance of new songs off of his EP,  SAY MAX, including “Mugshot” and “Streets of Gold.” He also treated his fans to the one and only “Baby Medley,” which has become a tradition to every MAX set. The young and multitalented artist anticipates an album release sometime within the next year; something that his fans have been eagerly awaiting for quite sometime. MAX also came on later in the night to perform the songs “Won’t Mind” and “Numbers” with long-time pal and main act Hoodie Allen.

Next up was rapper Chiddy Bang, who pumped up the crowd with his raps, even bringing a fan up on stage to enjoy a moment of fame, and giving out free t-shirts. Chiddy also featured in the number “Fame is for *ssholes” during the main act, a record from one of Hoodie’s older albums.

Finally, Hoodie tore up the stage with songs from his new album People Keep Talking, which was released last October. Fans went wild as they sang along to new jams like, “Act My Age,” “Show Me What You’re Made Of,” and “All About It,” as well as old hits like, “No Interruption” and “Two Lips.” Allen ended the night by crowd surfing on an inflatable raft and spraying water through the crowd. NYC proved to be the loudest crowd on tour when its cheers and screams reached 27.1 decibels, beating Chicago’s record of 26.3. Allen’s passion for his craft and energy on stage made the treacherous wait out in the cold extremely worthwhile, and truly made the experience “one of the best Friday night of [the audience’s] lives,” as promised.