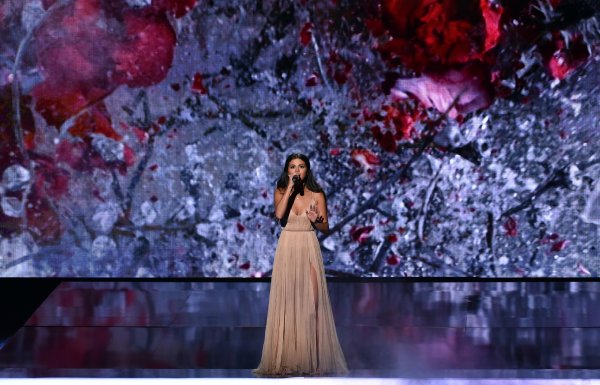 Hits & Misses From The AMA’s

The 2014 edition of The American Music awards happened this past sunday night at the Nokia Theatre in Hollywood and although the show didn’t have any major noteworthy moments, it was still fairly entertaining for what it is these days, a b­grade award show that has seemingly devolved into a less tacky Teen Choice Awards. That being said,  there was still plenty of wonderful highs and uncomfortable lows during the 42nd annualAMA’S. Lets take a peak at the hits and misses from sunday nights show:

You know, once upon a time I was a little skeptical of these guys but the more I see them the more I love them, including last night when they snagged the Best New Artist Award. Although it might be a little too teeny­boppy for my tastes, im happy that there is guitars on top 40 radio, and it makes me ecstatic to hear so many kids getting excited over rock and roll music again, no matter how cool or uncool your friends might think they are. My only problem I had with them was deciding to play a cover instead of one of their originals. This past year they released a few of the catchiest pop rock songs to hit top 40 radio, yet they’re still relatively unknown, so I think they would have been better off with one of their big singles like “She Looks So Perfect” or “Don’t Stop”. Side note, those girls scream really really loud.

Im sorry, I know shes still just as hot as she ever was, but enough is enough. Isn’t she like, 45 now? The lady has kids, toss on a dress or something, jeez. At one point during the weird exhibit of twerking lights, the song stopped so shecould answer a phone call from “Big D” who she said is just a booty call. I don’t know, doesn’t seem very responsible for a middle aged mother. Plus, lets be honest, that dance club trash that she packages up as songs is some of the most soulless and bland music we as a society have ever had to have forced upon us through top 40 radio torture. Seriously, I bet “Waiting for Tonight” was playing when a Guantanamo hostage finally broke his

code of silence and led us to Bin Laden. Now, back to last night. I have one major question about this song. Was Jennifer Lopez just chillin’ at home when she “wrote” this? What compels someone to write a song called “Booty”? Either way, god bless America.

The past year has seemed like a relatively quiet time for the California Gurl (sorry, it was too easy, won’t happen again). On sunday night the world was reminded that Katy Perry hasn’t gone anywhere after she scooped up 3 trophies, tying with One Direction for the biggest haul. Although, she wasn’t able to attend the show since she’s on tour, she still took up plenty of headlines that night as she was also announced as the performer of this years Super Bowl halftime show, the biggest show of all time, with over 110 million sets of eyes watching worldwide each year. Safe to say that by the time we get to the 2015 AMA’s, we will probably be seeing a lot more of Katy.

Selena came out to perform her brand new single,I know, it was emotional, it was powerful, yada yada yada. I don’t care. Why do they have to trot someone out there every year to perform a yawn­inducing heartbreaker about some other celebrity ,while angel wings or unicorns run around on a big dumb video screen behind them? Seriously, think about it. They do this every year. I get it, everyone loves a ballad, but in performances as “fake” as some award show performances have to be, then I would think its best to play a big hit. Just me though. Also, how did this girl date that Justin Bieber kid for so long? Didn’t every person on earth warn her about how much of a grease ball that kid would end up being? Eh, I guess hindsight is 20/20.

I hate to say it but these kids are straight killing it. Its nothing you’d really ever catch me listening to, mainly because I’m a grown man, but they have been on top for almost 4 years now and they are showing no signs of slowing down. The boys took home awards in all three categories they were nominated in, including the biggest award of the night, Artist of the Year. Their performance was pretty cool too, even though it looked like they were on the set of Ferngully or something. The song was pretty catchy, and the group has a cool style while still being very distinct. There was the handsome gypsy kid in the middle, the handsome guy that looked like a waiter, the handsome turtle neck dude, and the other two fairly attractive guys. I guess I see why there was so many deafening screams at the mere mention of their name. Either way, good for them, and they must be rich as all heck after a sold . It’ll be interesting to see how their legacy plays out in the near future and what we will think of them in 5 years. I’ll tell you one thing though, their mob­like fan base of millions leads me to believe they’re here to stay, at least for the time being.

Miss: The actual awards part of the show

Maybe I’m just getting old, but isn’t Lorde a pop act? Why is she always being included in rock and alternative categories these days? Also, in what world is The New Classic a better album than Nothing Was The Same or The Marshall Mathers LP2? Iggy bested Drake and Eminem in the Best Rap Artist category as well. Don’t get me wrong, I like Iggy Azalea just fine but Drake is one of the biggest artists on the planet who releases hit after hit, and Eminem was having a resurgence after his return to form on the critically acclaimed MMLP2. I understand that award shows like to involve fans, but with social media being dominated by fanatical teenage girls with iPhones and Twitter accounts, I don’t think think fan votes should be a factor to such a large extent, except for at the TCA’s

Taylor Swift might be having the best month of her life this fall, capping it off on Sunday by receiving the Dick Clark Award of Excellence, and with a huge opening performance of her new single “Blank Space”. After seamlessly transitioning to full on pop music, she has been in the spotlight recently for igniting a national discussion on the future of music and streaming after she pulled all of her music off of streaming sites like Spotify. She responded by selling 1.3 million copies of 1989 in the first week, the biggest debut in 12 years. She also became the first artist to have three albums sell one million copies in their first week. Needless to say, there is a certain charm about Taylor that makes people buy into her, and that charm was front and center during the shpw. From her performance, to the video package for her Dick Clark award, to every time the camera went her way during another artists performance, Taylor Swift really has something about her that makes her seem like the realest person in the room.