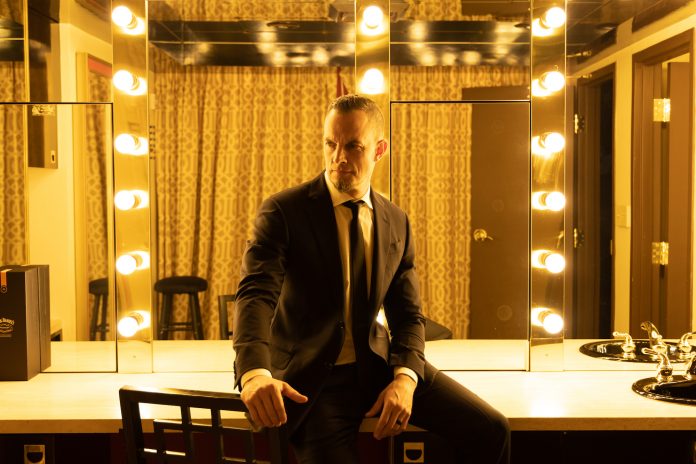 Rock guitarist and singer Mark Tremonti (Alter Bridge, Tremonti, Creed) has given his fans a pleasant surprise with his new release. Tremonti Sings Sinatra is being released May 27, 2022.

The new project from Tremonti also highlights an important philanthropic effort in raising money for the National Down Syndrome Society.

Full disclosure, I am not well versed in Sinatra’s library. In fact, there are only three songs on this record that I could name from Sinatra.

The Backstory: Last year, Tremonti and his wife welcomed their daughter Stella. Stella was born with Down syndrome. According to Tremonti, it was then that the “stars aligned.” He would be able to put his longtime love for singing Sinatra to good use: raising money for charity.

Tremonti states, “When we found out about our daughter’s Down syndrome diagnosis, the stars aligned. My obsession with Sinatra had its reason. Frank Sinatra raised more than a billion dollars for charity and that is a fact I wish the public knew more about. Beneath his cool and calm persona, he had a big heart. Doing this charity in his name was another way the stars had aligned. I decided to do this record to raise funds for families and individuals with Down syndrome. This project is the start of a new purpose that I will have for the rest of my life.”

The Record: With the idea in hand, Tremonti got to work getting his team on board. Tim Tournier, manager of Alter Bridge and Tremonti, was all in. Tremonti was able to get the approval from the Frank Sinatra Estate to record the songs. He was even able to get Sinatra’s original band to record the songs with him. The stars completely aligned.

Now we have Mark Tremonti in a form fans never thought they needed.

The Review: From the opening notes, Tremonti captures listeners with his soothing tone and controlled notes. If you knew nothing about Mark Tremonti, you would think he was a long time crooner. You would never guess that he is a metalhead and rock singer.

Tremonti’s talent is unrivaled. He is not only able to pull off a tone similar to Sinatra’s, but he is able to command the record in the same way Sinatra did. You can hear Tremonti singing with the swagger that Sinatra and his counterparts were famous for.

The lead single off the record is “I Got You Under My Skin.” The song choice for this release was brilliant and they did a great job of setting the scene for the listeners. Right off the bat, Tremonti made it clear that he could pull off the task of honoring Sinatra.

In the final moments of the song, Tremonti showcases his vocal prowess. He is able to take the song into his lower register and slowly jumping up into a higher tone. It is a great song to kick off the record AND get listeners to open a bottle of whiskey while lighting a cigar.

We quickly transition into “I’ve Got the World on a String” and Tremonti picks up right where he left off. What I love about this song is you have the true familiarity of Sinatra’s horns and band accompanied by something new with Mark’s vocals.

This song will make you want to light the fireplace, grab your love, and dance to the music.

Tremonti slows things down with “I Fall in Love Too Easily.” Right from the start, you want to sway with the music while listening to the soothing vocals. Tremonti also has a bit of a rasp at certain points. His vibrato sent shivers down my spine.

Again, Tremonti was able to showcase his range in a way that both paid tribute to Sinatra while also allowing him to be authentic to himself. You could hear the styling of Sinatra in Tremonti’s voice while hearing Tremonti not lose his own voice.

With “Waves,” Tremonti gives his best vocal performance on the record so far. We hear him hit some really low notes. He digs deep to hit some powerful bass lines. I also want to point out how good Sinatra’s orchestra is throughout the record. The string work on this song is in a league of its own.

“Fly Me to The Moon” is probably one of the most well known Sinatra songs. Usually, when I hear people cover this song, I cringe. It is such a classic song and people never do it justice. Women change it so much that it loses its prestigiousness; men usually cannot do it justice.

Tremonti was able to walk the line of making it his own while keeping it classic. Tremonti added his own swagger to this classic hit and allowed his personality to shine throughout the song. You could hear Tremonti having a good time. Maybe by this point in the record he had settled into the idea of paying this kind of tribute to Sinatra.

Things slow down again on “Nancy (with The Laughing Face).” At this point, I poured my second glass of whiskey and continued to sip my way through the record. Another great performance from Tremonti and the Sinatra Orchestra.

Tremonti then takes on “My Way.” This has got to be my favorite Frank Sinatra song. For Tremonti to try his hand at this song and have me immediately fall in love with his version is a win for the rocker. What I love about Tremonti’s version of this song is I believed I was listening to him tell a story, I didn’t feel like he was just singing a song. I could feel true conviction from Tremonti. I could feel his passion through my headphones.

Tremonti’s voice is also extremely comforting and soothing. I truly loved this rendition of the song. In keeping with the classic version of “My Way,” the song slowly climbed as it progressed. As the song’s energy began to climb, so did Tremonti’s notes. He really hit some high notes as the guitar began to solo. The guitar work on this song is truly fantastic.

I would like to note, there are times where I forgot that this wasn’t Frank Sinatra singing.

The energy of the record picks up again with “You Make Me Feel So Young.” This song is one of the tracks I got lost in and had to come back to the reality of it being Mark Tremonti singing. I am so used to him singing rock and roll. The final notes on this song once again showed the world that Tremonti is much more than just a guitar player or rock singer.

“Luck Be a Lady” is up next. Tremonti sings this song in a slightly higher key than Sinatra but it sounds amazing. It is very clear that Tremonti is having a good time on this piece. You can almost feel Tremonti dancing as he sang. As I listened, I closed my eyes and could actually picture him performing this song. Incredible job from Tremonti.

Tremonti really let loose on “That’s Life.” You can hear him releasing some of his pent up aggression as he sang “I’ve been a puppet, a pauper, a pirate, a poet, a pawn and a king”. “That’s Life” could not be a more worthy song for this record; its focus is on the idea that life is hard and the world keeps turning, and you should never give up. A message for us all.

“Come Fly With Me” was another great performance from Tremonti. He was able to pay tribute to Sinatra again while having fun. This song always makes me feel like I’m flying high in a plane over New York city, and the big finish gets me every time. Tremonti’s voice carries those final notes with pristine clarity and the band backs him up perfectly. Expertly executed.

Tremonti’s take on “In the Wee Small Hours of the Morning” is incredible. There’s a more delicate quality to his tone here, and his vocals are spot on with Sinatra’s band complimenting him extremely well. I loved the strings especially on this track. The original piece has a melancholy, contemplative feel, and Tremonti has replicated it to a T.

Finally, we reach the point in the record where the time has come for Tremonti’s inspiration for this project, “This Song is for You”. Tremonti makes it feel like this song is for Stella. Maybe it is, I don’t know for sure. I honestly teared up listening to this track.

There are a few moments where Tremonti’s vocal skills make you stop and think, “wow, this is really good.” Even without another final track, this song would have been a beautiful way to wrap up the entire project.

The final song on this record is “All or Nothing At All.” This is yet another masterpiece from Tremonti. His vocals are top notch. Honestly, there isn’t anything I can say about this song that I couldn’t say about the rest. He ended this song with an incredible final note that wrapped up the record nicely.

Tremonti killed this record. It was a fantastic listen from start to finish. I found virtually nothing wrong or unlikeable about this record. The concept, the cause, and the execution are all excellent. I hope we get a follow up to this record because that would be amazing.

All in all, this is clearly a home run for Tremonti. Tremonti Sings Sinatra can and should go down as one of Tremonti’s best and most important records. This was a fun listen and will make you want to dance, sway, and cry. Get this record.