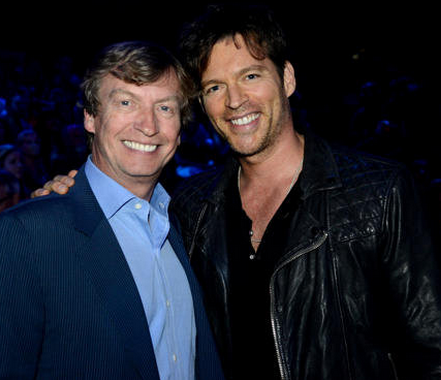 On Tuesday, it was officially announced that the judging panel for “American Idol” Season 13 will be Jennifer Lopez, Harry Connick Jr., and Keith Urban. Ironically, this was actually the “dream team” suggested by longtime “Idol” producer Nigel Lythgoe, before he was fired from the show earlier this year. So Nigel got his way in the end — but it was all too little, too late.

On Tuesday evening backstage at his other Fox franchise, “So You Think You Can Dance,” Nigel was candid when speaking about his reaction to that morning’s “Idol” news. “Both [fellow ousted ‘Idol’ producer] Ken Warwick and myself asked for that team last year. It feels a bit like a kick in the teeth,” he admitted. “But I’m thrilled for ‘American Idol.’ At least they’ve made one good decision this season!”

When asked if the door would ever be open for him to return to “Idol” in light of this development — and in light of the news that veteran judge Randy Jackson, who supposedly left the show this year, will be back next season as the series’ in-house mentor — Nigel answered, “I very much doubt it.” He then added: “I think Randy is a fantastic ambassador, [but] I’m sorry that they’ve lost [former mentor] Jimmy Iovine. Jimmy Iovine was a good voice and a good opinion, whether you agreed with him or disagreed with him.”

Nigel didn’t totally bad-mouth his old workplace, however, claiming that the J.Lo/Harry/Keith panel might be “Idol’s” best yet, and saying, “It’s going to be an interesting season, one that I think they’ve now put on the right track…It’s never going to be the same, it’s never going to be in that 35-40 million mark, but the program is still brilliant…For me, every single season that I worked on ‘American Idol,’ even when we were going downhill last season, has been brilliant. It’s been an honor to work on it.”

“American Idol” Season 13 will kick off in January 2014. The “So You Think You Can Dance” Season 10 finale will air next Tuesday, September 10.