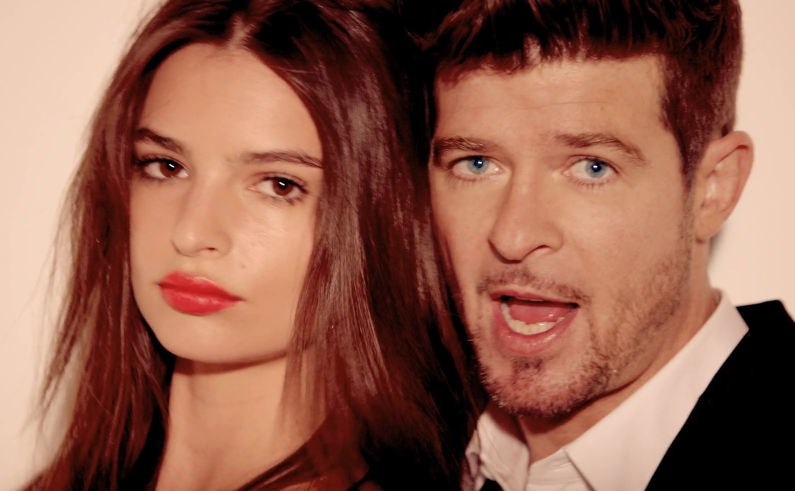 The model has a book coming out next month titled My Body where she makes an accusation against the pop singer, Robin Thicke. According to the New York Post, Thicke spend most of the day for the ‘Blurred Lines’ music video drinking. When Ratajkowski was undressed, Thicke reportedly grabbed her breasts.

The ‘Blurred Lines’ music video featured Thicke, Pharrell Williams, and T.I. singing and dancing with Ratajkowski and two other models while the models were nude. There were two versions of the video published, one with the models dressed and one with the models completely nude.

“Suddenly, out of nowhere, I felt the coolness and foreignness of a stranger’s hands cupping my bare breasts from behind. I instinctively moved away, looking back at Robin Thicke,” writes Ratajkowski.

Ratajkowski claims to have enjoyed the filming of the music video until Thicke began to drink.

“He smiled a goofy grin and stumbled backward, his eyes concealed behind his sunglasses. My head turned to the darkness beyond the set. [The director, Diane Martel’s] voice cracked as she yelled out to me, ‘Are you okay?,’” the book states.

“I remember the moment that he grabbed her breasts,” she said. “One in each hand. He was standing behind her as they were both in profile. I screamed in my very aggressive Brooklyn voice, ‘What the f–k are you doing, that’s it!! The shoot is over!!’”

Thicke was reportedly apologetic about the incident. Martel went on to say that she didn’t think that Thicke would have done had be been sober.