So that’s how a professional wrestling show feels like with a crowd. What a wonderful thing.

Double or Nothing was remarkable for the simple fact it occurred. All-Elite Wrestling owner Tony Khan made the decision several weeks ago to make the company’s first full-capacity show since the beginning of the COVID-19 epidemic. The company, the crowd, the wrestlers, the announcers couldn’t have been better.

The show was pure joy – from Serena Deeb and Riho’s classic during the pre-show, to the main-event cinematic Stadium Stampede (complete with a cameo from college football coaching legend and current Jacksonville Jaguars head coach Urban Meyer). The end summed up why AEW and this show worked, with Sammy Guevera and Shawn Spears getting their star-making moment as the center to the main event. They began the match, they were the meat in the middle and they finished it and they delivered.

Sports are important because they aren’t important. Things that are of significant duty rarely involve joy. In the last week, since the COVID-19 world began to slip away and we have been able to gather together, we’ve seen Phil Mickelson’s legendary run to the PGA Championship, Helio Castroneves win his fourth Indy 500 in front of 150,000 fans as he did his Spider-Man climb only to run the length of the straightaway to celebrate with the crowd. Double or Nothing was professional wrestling’s special moment. 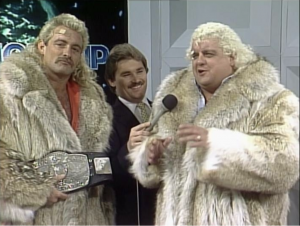