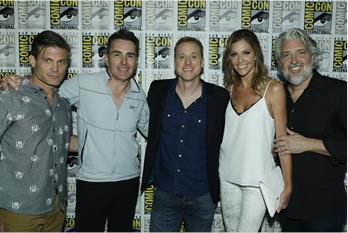 The SyFy channel, known for hosting critically acclaimed shows such as Battlestar Galactica and quirky movies like Sharknado, has announced their acquisition of Season 1 and 2 of the Emmy®-nominated web series Con Man from Redbear Films during their panel “Con Man: Cons and Fandom Culture.” Alan Tudyk, star of the series, moderated the panel while sharing memories of some of Con Man’s memorable guest stars such as Tricia Helfer, Amy Acker, Nolan North, Casper Van Dien and Executive Producer PJ Haarsma.

Along with this reveal and a few trade secrets on making a successful web series, audience members were treated to a performance of the iconic hoedown from the second season. Mere words wouldn’t do it justice, but if you would like the pleasure of watching a cardboard cutout of Nathan Fillion dance onstage to western music dedicated to Of Mice and Men, you can watch it here.

The series follows the journey of a washed-up sci-fi celebrity who, after starring in a show that suspiciously resembles Firefly,  relives his glory days on the convention circuit. If you haven’t had the chance to catch up on this show’s lampooning of both popular science fiction and convention culture, you can look forward to its television premiere this September. If you can’t wait that long, check out the preview below!