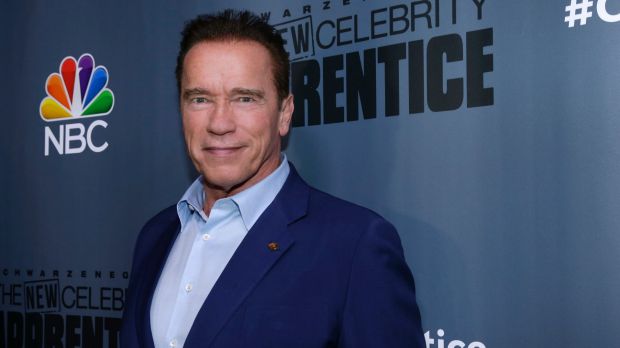 The NEW Celebrity Apprentice opens up with a recap of Arnold Schwarzenegger’s career. Then the introduce the new specialists Steve Ballmer, Warren Buffet, Tyra Banks and Jessica Alba. The preview in the opening shows that this season will be incredibly entertaining.

The celebrity cast show up at “Schwarzenegger Inc” where the receptionist welcomes them with “Mr. Schwarzenegger will be with you shortly”. I will say this, Chael Sonnen looked really confused.

It only took a few minutes to find out what his catch phrase will be…”Terminated”. The contestants are broken up into boys and girls and we see the boys trying to get a team name. Matt Iseman showcases his love for Arnold and they end up with “Team Aret”. The ladies are seen next trying to come up with a team name and Snooki showcases stupidity by suggesting the name “Vagina”.

The boys are having to convince Boy George to manage the project. Tyra then goes into the meeting rooms to showcase the products and it looks like the boys are getting really hands on.

The guys decide to do a “Man on the street” make over and argue on who should be applying makeup. The girls decided to have models test the makeup and do commentary on how easy it is for an average woman to apply the makeup. Boy George decides to have the guys practice applying the make up.

Its time for presentation and in comes Tyra, Patrick and Arnold. The girls are up first and they do a “TyOver”. Carnie Wilson takes the microphone and belts out “Refresh Your Face” and does not impress Arnold. Matt Iseman comes out and showcases the future of pitchman. All the guys are doing amazing! I truly thought they took the challenge above and beyond the call of duty.

Its now time for the decision in the boardroom. Arnold made it clear that you need to call him “Governor”. Tyra thought the girls didn’t utilize their persona’s but thought the guys did a great team. Boy George gets $50k for his charity and Arnold excuses the guys.

Porscha volunteers Snooki to be fired. Arnold fires Carrie and sends her to the “Choppa”.

End of hour one.

We come back for hour two in the El Capitan Theatre in Los Angeles. The next project with Trident and the Apprentices need to write an original song and music video for the brand. Carnie Wilson is elected Project Manager for Prima and Jon Lovitz for the guys.

Porsha and Carnie clash over time. Its time to play the commercial.

Now it’s time for the woman to battle it out. Carnie chooses Leslie and Snooki back to the boardroom. Arnold fires Carnie WIlson, and rightfully so. Arnold told Carnie that she made a mistake not choosing Kyle.