Wrestling With AEW Chief Brand Officer, Brandi Rhodes: Brandi Discusses What Is AEW, Where They Are As Far As TV Deals Go, And Double or Nothing In Las Vegas

Brandi Rhodes, the Chief Brand Officer (Or Chief Brandi Officer) of All Elite Wrestling called into Wrestling With Ruben and discussed all things AEW.

What is All Elite Wrestling? What type of TV will they do? And much much more!

In a recent interview, The Young Bucks discussed the idea of All Elite Wrestling having a streaming deal.

I recently wrote the idea that AEW could survive and thrive on a streaming deal with fan support. Brandi did discuss what she thinks could happen with AEW’s TV deal.

Brandi also discussed why she thinks now is a much better time to launch a wrestling company than it was a few years back when Jeff Jarrett attempted to launch Global Force Wrestling.

For More, go to http://MutliMediaMouth.com

Wrestling With Abilene Maverick: WOW – Women of Wrestling Premieres On AXS TV On January 18. Abilene Tells You Why You Should Tune In

Ruben Jay talks to WOW – Women of Wrestling Superhero, Abilene Maverick about the January 18th premiere of WOW on AXS TV. Abilene discusses why you should tune in, who she wants to face, and what makes women’s wrestling important in today’s day.

[Interview] Cody Rhodes Discusses ALL IN on September 1, 2018 As Well As His Expectations, The Future, and What the NWA Title Means To Him

Cody Rhodes discusses what All In means to him and the Bucks. He also talk about how planning the event is turning out for himself.

Rhodes then talks about what the NWA World Championship means to him. Ruben Jay then asks Rhodes what he thinks Rhodes will be doing on September 2.

Catch ALL IN Zero Hour on WGN America at 6PM EST/ 3PM PST.

WWE’s Superstar Shakeup is in full swing and night one is over. Ruben Jay reviews RAW’s acquisitions so far.

The Miz moves to Smackdown.

Impact Wrestling is also working on renewing their UK TV deal with Spike UK. Currently, they are scheduled to be off the air very shortly if a deal isn’t made.

Jason Brown is the CEO of AroLucha, a new American based Lucha Libre company from Nashville, TN. Brown talked to Ruben Jay about the launch of AroLucha and his background in media and entertainment.

Brown discussed the importance of having a family friendly product for all to enjoy while also catering to the adults in the room. Brown shared his thoughts on the promotion selling shares to fans and the speculation that has brought on to the new promotion. One of Brown’s biggest focuses will be to create new stars from the ground up.

Listen to the interview by streaming below!

Ruben jay attended Ring of Honor’s Death Before Dishonor in September. He had the chance to talk to Jay Lethal. Check out the quick interview.

Ian Riccaboni speaks on Death Before Dishonor, Which announcers he likes to listen, WWE Buying ROH, CODY in ROH

Ian Riccoboni joined Ruben Jay on Wrestling with Ruben. Riccoboni spoke on the Death Before Dishonor show this weekend in Vegas. He also talked about how much wrestling announcing has improved. Riccoboni spoke about the rumors of WWE buying Ring of Honor.

Riccoboni also spoke on having CODY Rhodes in ROH and why people like Daniels, Kazarian and Rhodes are all in ROH.

Jeremy Borash discusses the rebranding of Impact Wrestling to GFW, Slammiversary 15, and announcing

Ruben Jay hosts Jeremy Borash of GFW Impact on this installment of Wrestling with Ruben! JB is one of the hardest working men in professional wrestling, and with almost 20 years experience, he’s been taking on more responsibility at the newly rebra 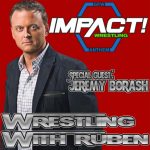 On the top of the show, Jeremy discusses his match with Joseph Parks AKA Abyss v. Scott Steiner and Josh Mathews. JB and Ruben Jay discuss the new ownership of the promotion.

JB also comments on the upside of having Alberto El Patron as a part of the GFW roster.

You can catch GFW Impact Wrestling on POPTV on Thursday night.

Support the show by shopping at Amazon! CLICK HERE to get to our affiliated Amazon page.

Ruben Jay welcomes PWTorch Audio Analyst Todd Martin to the Podcast. Todd is in Los Angeles to attend the New Japan Pro Wrestling show in Long Beach. Martin and Jay talk for 45 minutes about all things pro wrestling. Martin gives us a brief overview on the NJPW show.

Jay and Martin also talk about WWE’s Great Balls of Fire and who they think will win in the Samoa Joe v. Brock Lesnar match. They talk about Enzo Amore and Big Cass’ breakup.

Listen to the whole show.