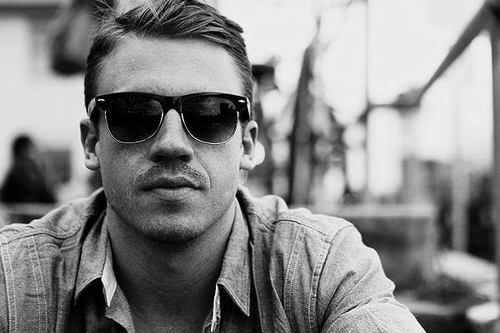 It had been a long time since Twin Peaks hijacked my imagination, my soundscape and got me in a state of mourning when it ended. Sure, there have been other memorable TV shows: Lost, The Wire, most recently Game of Thrones, but nothing had ever affected me to that extent ever since.

It all happened by accident, or some would say serendipity. I caught a preview on loop on the menu of Sky Anytime featuring Clea DuVall reading the Tarot. As I’m learning the Tarot myself, it was too much to resist. I watched that first episode. Then the second. Then I downloaded the entire two seasons and did little else for two weeks other than bingeing on Carnivàle.  Mourning followed, and a bout of the dreaded End of Boxset Blues Syndrome™ promptly ensued. It was all over too quickly as only 24 episodes were ever made.

Carnivàle was produced by HBO and aired between 2003 and 2005; after only two seasons and allegedly due to a combination of escalating costs and disappointing ratings, it was cancelled. Therefore, if you are about to embark on a posthumous viewing of the show, be prepared to do so in the full awareness that the journey will be short-lived. (I failed to mention this not-so-insignificant detail to a friend, and by the time she realised, it was too late. She, too, was struck by EoBBS. But I digress)

Set in the United States during the 1930s Great Depression, Carnivàle follows two slowly converging storylines; the story of Ben Hawkins, a young man with a troubled past and strange healing powers, and the ascent of Brother Justin Crowe from local Methodist clergyman to radio-star preacher of national fame.  The pilot episode sees Ben trying to bury his mother whilst a demolition lorry is waiting to demolish their house; a passing Carnival stops by and, after gathering with him to perform an impromptu funeral, offers Ben temporary shelters from the approaching police. And so the story begins; the convoy resumes its long drive through the Dust Bowl and our journey into this magnificent universe begins.

In this dense and incredibly rich “universe”  the mystic, prophetic figures of Ben and Brother Justin are supported by some utterly memorable minor characters, to include a snake charmer, a bearded woman, a dwarf, a tarot reader and her catatonic mother  (who, of course, possesses telekinetic powers!) and many, many more.

Reading about it though, does not  do this show justice. You need to see it, because it is also a visual treat: one of the first things you will notice about Carnivàle is how stunning it looks. No expense was spared in the production, and it shows: each set piece was accurately reconstructed down to the most minute detail. The period costumes were been meticulously designed to belong to the period and location: from the elaborate, Victorian-style gowns of snake-charmer Ruthie to the single, raggedy outfit worn by Ben. Everything looks as if having seen better days, covered in dust and grime, used thousands of times. And the dust. To re-create the Dust Bowl conditions, smoke and dirt were constantly blown through tubes onto the set , with such convincing results that the viewer can almost taste the dust and sand.  I imagine the working conditions for the cast and crew must have been pretty uncomfortable during  filming.

As well as spectacular visuals, Carnivàle features some of the most inspired casting choices in recent TV history, starting with Michael J. Anderson – better known as the dwarf in Twin Peaks, who conveys his character’s mix of shrewdness and wisdom to absolute perfection.

Equally, as the central character on the series, Ben Hawkins could not have been better served than by Nick Stahl’s portrayal of an unlikely prophet; Stahl brings an almost James Dean-like combination of vulnerability and strength to the character, and allows “Ben-The Boy” to evolve throughout the series from the fugitive, confused young man unable to handle his ‘gift’ to a Christ-like figure, a man aware of his role within a bigger design.

Great cast, stunning cinematography , a meticulously reconstructed period setting and a compelling story should be sufficient to guarantee any TV drama long lasting success. And yet, HBO decided to cancel Carnivàle after only two seasons, allegedly to concentrate its budget on the BBC co-produced series Rome. Ironically, this would soon be axed too. Karmic justice, maybe?

A quick glance at the IMDB discussion boards seems to indicate that the cable network’s move was deeply unpopular: Carnivàle has a lot of fans. The general consensus seems to be that, had Carnivàle been created only a few years later, in what we could reasonably refer to as the ‘Post-Lost Era’, it would have probably survived the cull.

LOST, with its meandering, multi-layered storylines, large cast and lavish production shot on location in Hawaii, pretty much single-handedly re-defined serialised television drama. It engaged audiences like no other mainstream show had done before; it demanded attention and unashamedly invited its spectatorship to actively speculate on its diabolically complicated narrative (as clearly demonstrated by the plethora of internet sites/online discussion boards devoted to the show).

Carnivàle did not survive long enough to reap the benefits of the Noughties TV Renaissance. HBO has, in the meantime, produced several hugely successful – and equally expensive – series. The Wire, Band of Brothers, The Pacific, Game of Thrones, Boardwalk Empire – all of which make for challenging viewing. Carnivàle, with its six ‘books’ which were meant to contain a longer, more developed story arc, would have kept its audience and probably gained some more. The show’s loyal fans would not have switched allegiance to mainstream fare of the likes of CSI or Desperate Housewives.

But it was not to be and so another outstanding series bit the dust – eliminated, annihilated, destined to forever rest in TV Purgatory, incomplete, unfinished, unable to accompany its mission, namely to provide us with some long overdue Intelligent Escapism™. Who is going to be the next victim? U.S. networks, worried by the current economic climate and corrupted by the low-cost opportunities of reality TV, are taking fewer risks than ever before. Soon, all that there will be left on our screens will be variations on the Simon Cowell-spawned atrocities formula,  or insipid housewife-friendly fodder like The Mentalist.

But all is not lost, my friends. After all, if present offerings suck, nobody can stop us from rediscovering some lost treasures.

Carnivàle is currently on Sky Atlantic and on DVD.